Heaven and Hell by Emanuel Swedenborg is a thorough examination of Scripture to tease out a better portrait of the Judeo-Christian vision of Heaven and Hell. 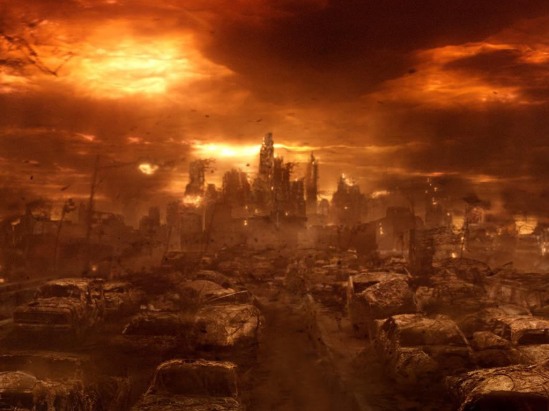 Of Hell, Swedenborg has this to say:

“Because hellfire is love for oneself and the world, it is also all the craving of those loves, since craving is love reaching out. Whatever we love we constantly crave, and it is our delight, since we feel delight when weget what we love or crave. There is no other source of our heart’s delight. So hellfire is the craving and pleasure that well up from these two loves as its sources. These evils are contempt for others, enmity and hostility toward people who do not support us, envy, hatred, and vengefulness; and savagery and cruelty as a result. In respect to the Divine, they are denial and a consequent contempt, derision, and blasphemy of the sacred values of the church. After death, when we become spirits, these turn into rage and hatred against such values.”

He also provides a list of Biblical verses relating to Hell and hellfire:

Everyone who is hypocritical and malicious, every mouth that utters folly, because it is aflame with malice as with fire, shall eat briars and brambles and kindle the thickets of the forest, and will rise up with the rising of smoke; and the inhabitants have become the food of fire, a man and his brother do not spare each other. (Isaiah 9:17–18[9:17–19])

I will make great portents in heaven and on earth—blood and fire and columns of smoke; the sun will turn into darkness. (Joel 2:30, 31)

The earth will become burning pitch, night and day it will not be put out, its smoke will rise up forever. (Isaiah 34:9–10)

Behold, the day is coming that will burn like an oven, and all the proud and all that do wickedness will be stubble, and the coming day will burn them up. (Malachi 4:1)

He opened the pit of the abyss and smoke came up out of the pit like the smoke of a huge furnace, and the sun was darkened, and the air, by the smoke from the pit. (Revelation 9:2)

From the mouth of the horses came forth fire and smoke and sulfur; and a third part of the people were killed by the fire and the smoke and the sulfur. (Revelation 11:17–18 [9:17–18])

Whoever worships the beast will drink the wine of the wrath of God mixed with myrrh in the cup of his wrath and will be tortured with fire and sulfur. (Revelation 14:9–10)

The fourth angel poured out his vial on the sun, and it was allowed to burn people by fire with its heat, and so it scorched people with intense heat. (Revelation 16:[8–9])

Every tree that does not produce good fruit will be cut down and thrown into the fire. (Matthew 3:10; Luke 3:9)

The Human-born One will send his angels, and they will gather from his kingdom everything that gives offense and every one who does iniquity and consign them to a furnace of fire. (Matthew 13:41–42,50)

And they will be sent off into eternal fire, into a Gehenna of fire, wheretheir worm does not die and their fire is not quenched. (Matthew 18:8–9; Mark 9:43–49)

The rich man in hell said to Abraham that he was being tormented in flame. (Luke 16:24)