Buddhism is a generous, loving, and compassionate path. In keeping with these beliefs, on Buddha’s “birthday” (Saga Dawa on the Tibetan lunar calendar falls on June 14, 2022, Vesak on other lunar calendar this year on May 16, 2022) it is considered important to give and celebrate love and kindness — Metta and Karuna.

Above all, Saga Dawa and Vesak is a “celebration of life” — a life-affirming day to joyfully and mindfully engage with the world, our fellow sentient beings, and nature; you don’t have to be Buddhist to celebrate Buddha’s Birthday.

Prince Siddartha, later the Buddha, was a living, breathing spiritual hero, the Conqueror who attained Englightenment in 528 B.C. and taught a path of wisdom and compassion. [Note: This is based on the latest archeological evidence. Earlier archeology timelines placed his life as 490 B.C. to 410 B.C., but recent finds now place his life as born 563 B.C. to Paranirvana at 483 B.C. — see timeline below.] 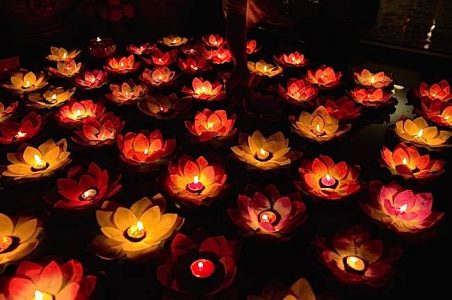 Although it may be celebrated at different times — due to the lunar calendar and cultural aspects — this year most Buddhists celebrate Vesak on May 16, 2022. This day was established in 1950 by the World Fellowship of Buddhists. In 1999, the United Nations acknowledged Vesak internationally. 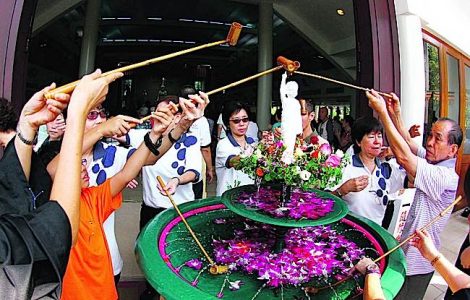 On this day we celebrate not only the Buddha, but the Dharma and Sangha — the teachings and the community. Vesak (Sanskrit Vaishakha, and Pali Vesakha) is also known as Saka Dawa (Tibetan),  Buddha Pumima, and Buddha Jyanti. 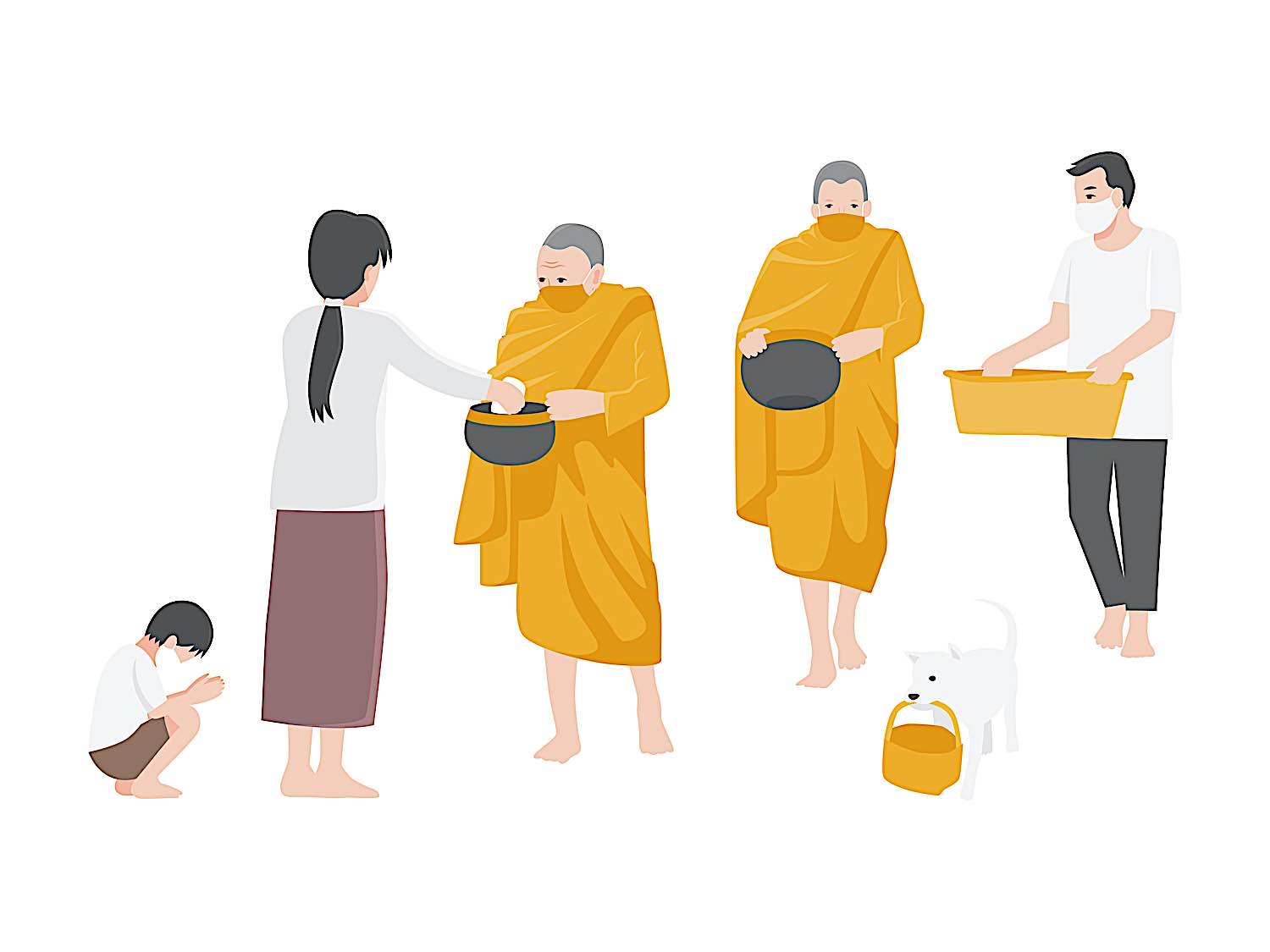 Generosity and giving have been a key practice in Buddhism since Buddha’s First Teaching around 528 B.C. Here a lay Buddhist give food to monks who eat only one meal a day.

Affectionately known as “Buddha’s Birthday” — is it too cute to dub it BBDay? — we traditionally make extra efforts to help the unfortunate, poor, sick, and aged, and engage in “karma yoga” activities including cleaning and painting gompas and temples, painting thangkas, and feasting on vegetarian food — all in homage to The Enlightened One. In Japan, it is traditional to pour hydrangea flower tea (amacha), while in Sri Lanka they might hang beautiful multi-coloured lanterns on the streets. Monks in various traditions will engage in pujas, mantras  and other ceremonies. 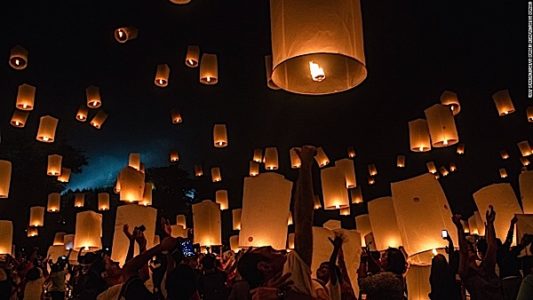 The one overwhelming theme of Vesak is joy, life affirmation, and compassion for all beings.

This is why we might eat a vegetarian meal — to honour our fellow sentient-beings — or engage in acts of charity or kindness. On this day, most Buddhists — and non-Buddhists to honour the day of compassion — will typically engage in the five lay-precepts, to paraphrase them consicely (see Five Precepts below): 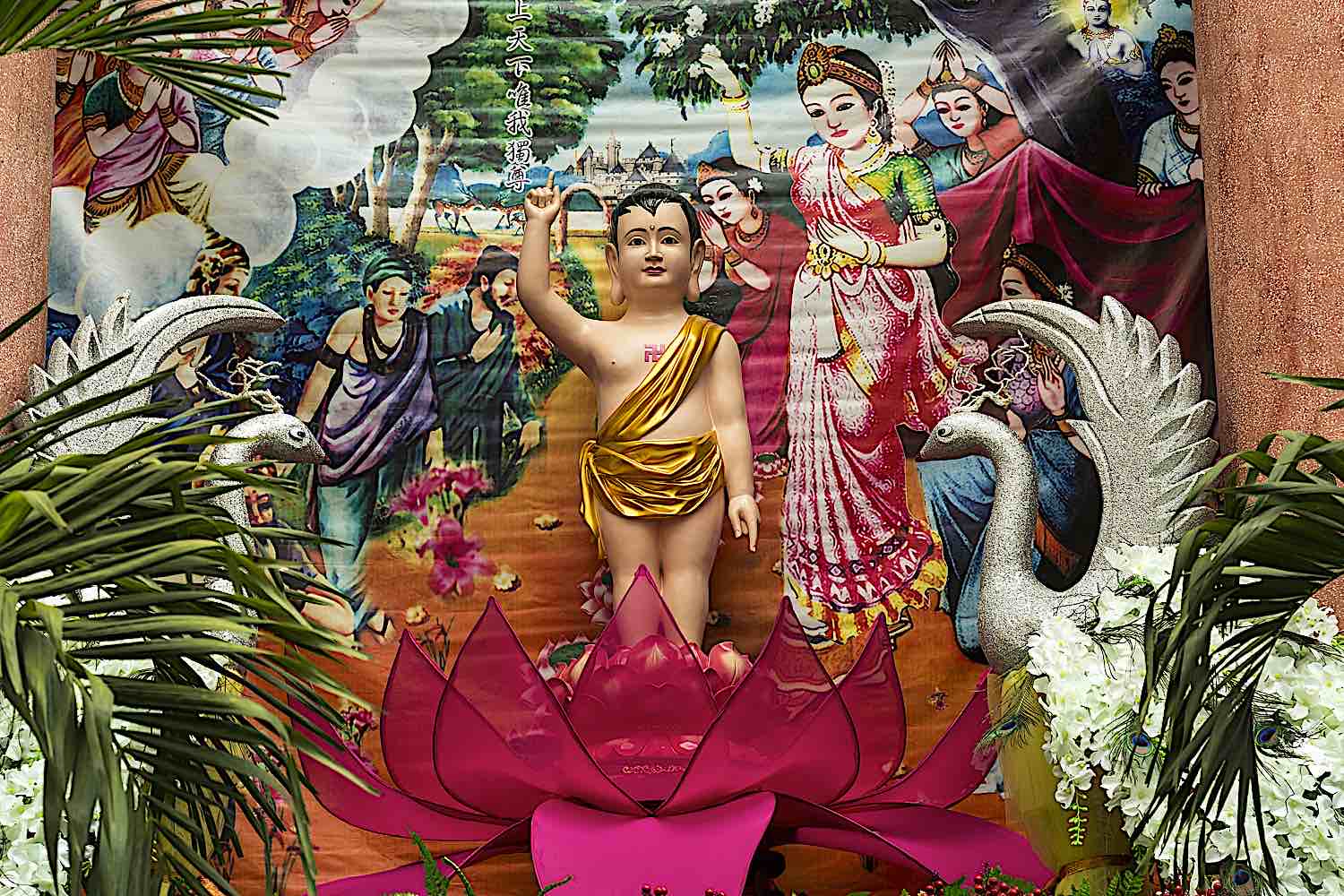 Buddha`s Birthday is a holiday traditionally celebrated in Mahayana Buddhism to commemorate the birth of Prince Siddhartha Gautama, later the Gautama Buddha and founder of Buddhism. According to the Theravada Tripitaka scriptures from Pali, meaning `three baskets` Gautama was born in Lumbini in modern-day Nepal, around the year 563 BCE, and raised in Kapilavastu.

Dates of celebration may vary 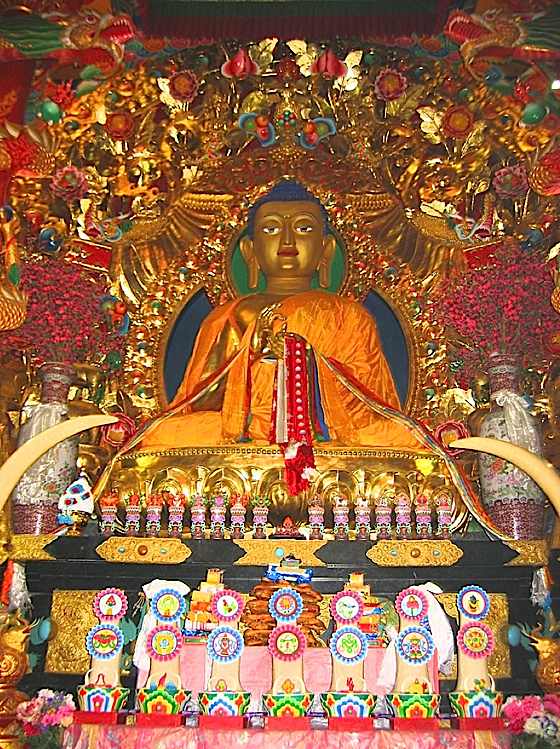 Temple statue of Shakyamuni Buddha, the historical Buddha, with offerings and decorations for celebrating Wesak, the Buddha’s Birthday.

Typically, devout Buddhists will assemble at a temple or gompa before dawn for ceremonies and honoring of the Holy Three Jewels: the Buddha, the Dharma (Buddha’s teachings), and the Sangha (the Buddhist disciples and followers). All of the festivities are about celebrating live, joy and compassion: 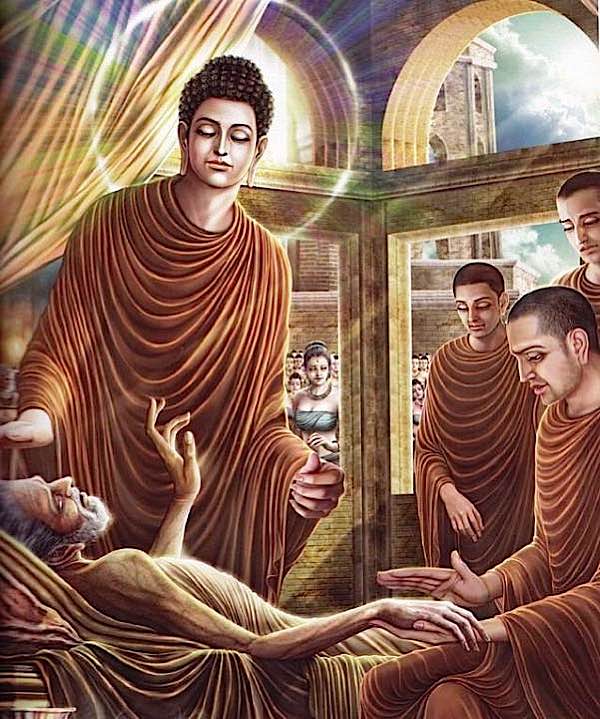 Virtuous acts of compassion exemplify the Buddha’s Eightfold Path. Here, Buddha helps a sick monk. On Vesak, especially, it is auspicious to undertake generosity, helping the elderly, sick or people in need.

“During Vesak many practitioners make special efforts to bring happiness to the elderly, disabled, and those suffering from illness, but it is also a time to give oneself happiness by creating beauty through artistic endeavors.” [1]

The Precepts for the Day

Any day, a devout practicing Buddhist tries to observe the five precepts:

However, the devout Buddhist who is a lay practitioner — on days such as Wesak — usually tries to observe the Eight Precepts of ordained Buddhists for the day, as training in morality and humility. 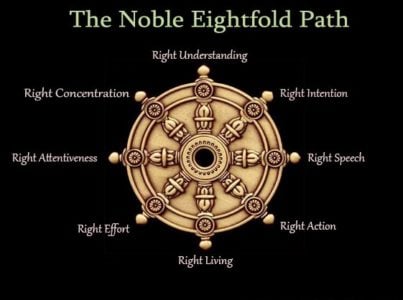 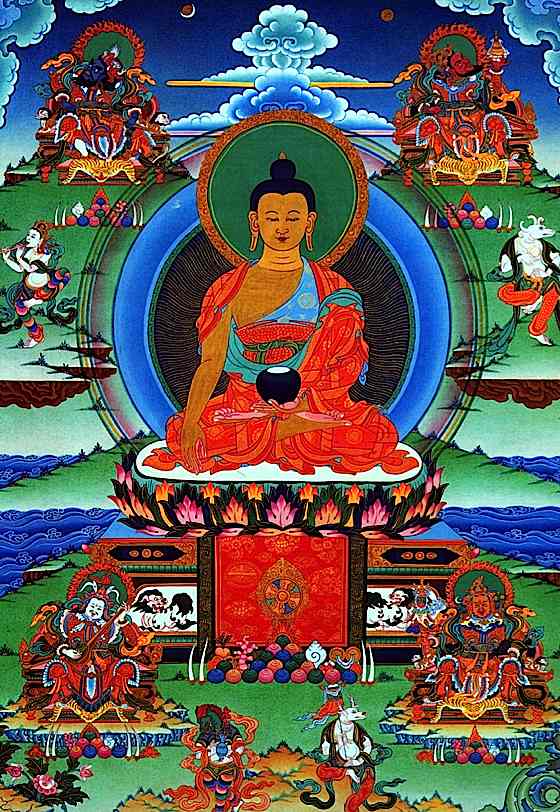 Shakyamuni Buddha, the current Buddha of our time, is honored by follower’s respect for the Dharma, His Teachings.

Homage to the Buddha

Guatama Buddha, the historical Buddha of our time, instructed us to pay homage to Him by sincerely following His teachings, the Dharma. Although offerings and flowers are respectful, a genuine homage to Siddartha Buddha is conveyed by conduct. On Wesak, we renew our promises to follow the Dharma, to lead noble lives, to cultivate Bodhichitta, to develop wisdom, and—of overwhelming importance—practice loving kindness. 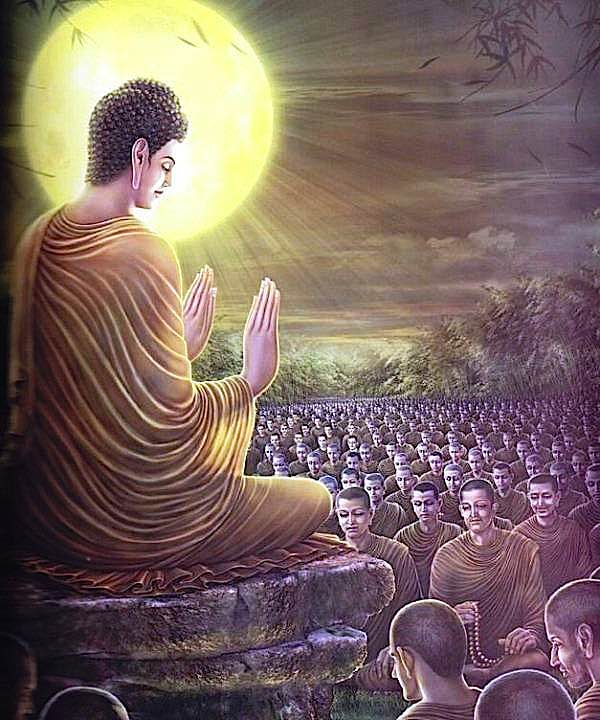 The Buddha first taught the Four Noble Truths and the Noble Eightfold Path.

Although earlier experts placed Buddha’s life at 490 B.C. to 410 B.C., the latest archeological evidence places Buddha’s Birth at 563 B.C. and his Paranirvana at 483 B.C. Dating relates to birth relics recently found, and his Paranirvana dates can be easily reinforced by his funeral relics scattered throughout India and Asia. 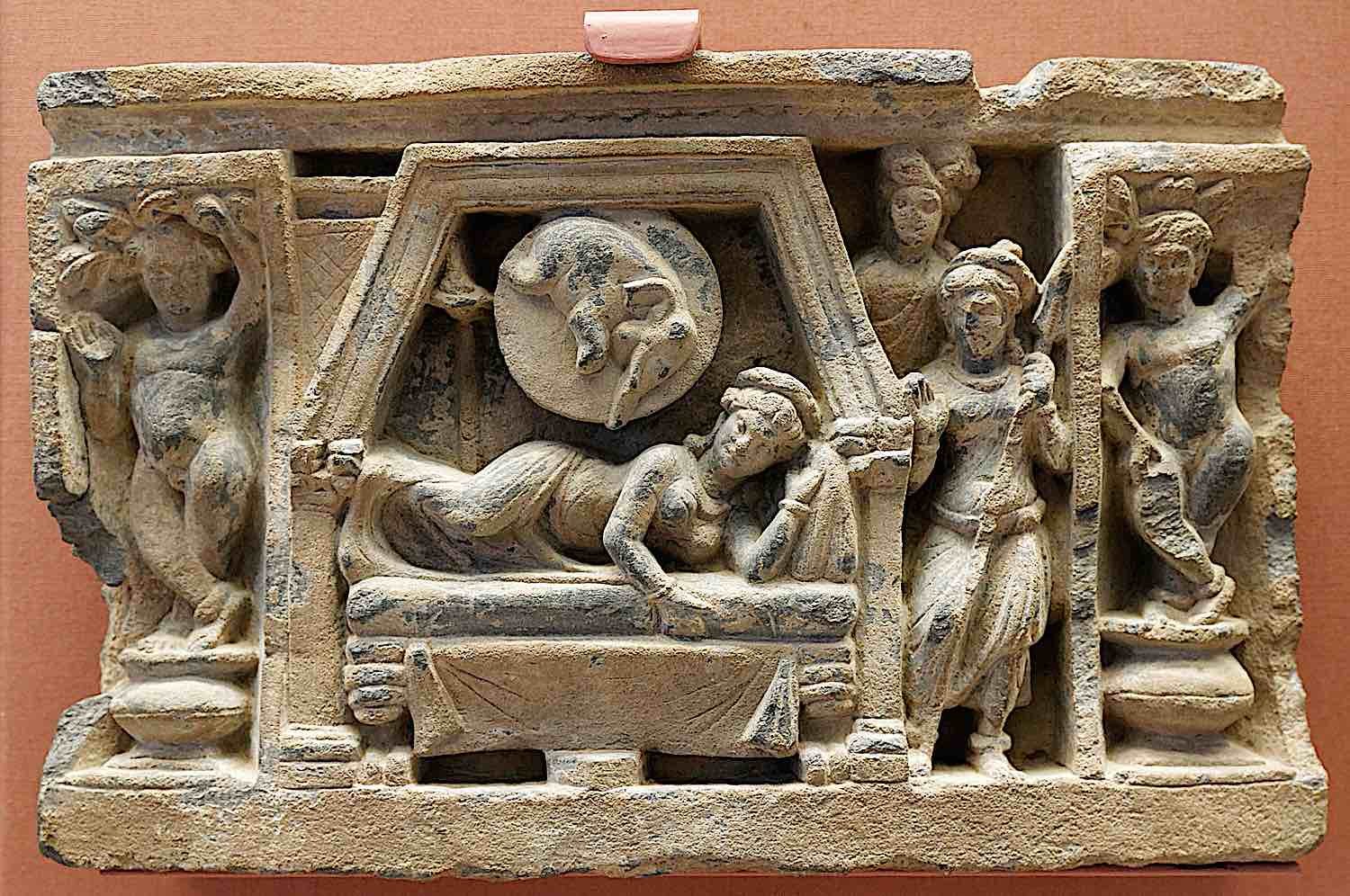 Sakyamuni (Shakyamuni) Gautama Buddha’s conception — in much of Asia, conception is the celebratory date, rather than the actual date of birth. [2] Famously, Queen Maha Maya, Buddha’s mother, had a conception dream of a white elephant with six tusks descending from heaven to enter her womb. His title Sakyamuni (pronounced Shakyamuni) literally means ‘sage’ of the Sakyans — where Sakya was his father’s kingdom or oligarchic republic (located in modern-day Nepal). Muni literally means “sage.” Śākyamuni (शाक्यमुनि) is title of Buddha fist cited  in  Mahāprajñāpāramitāśāstra (chapter VI). 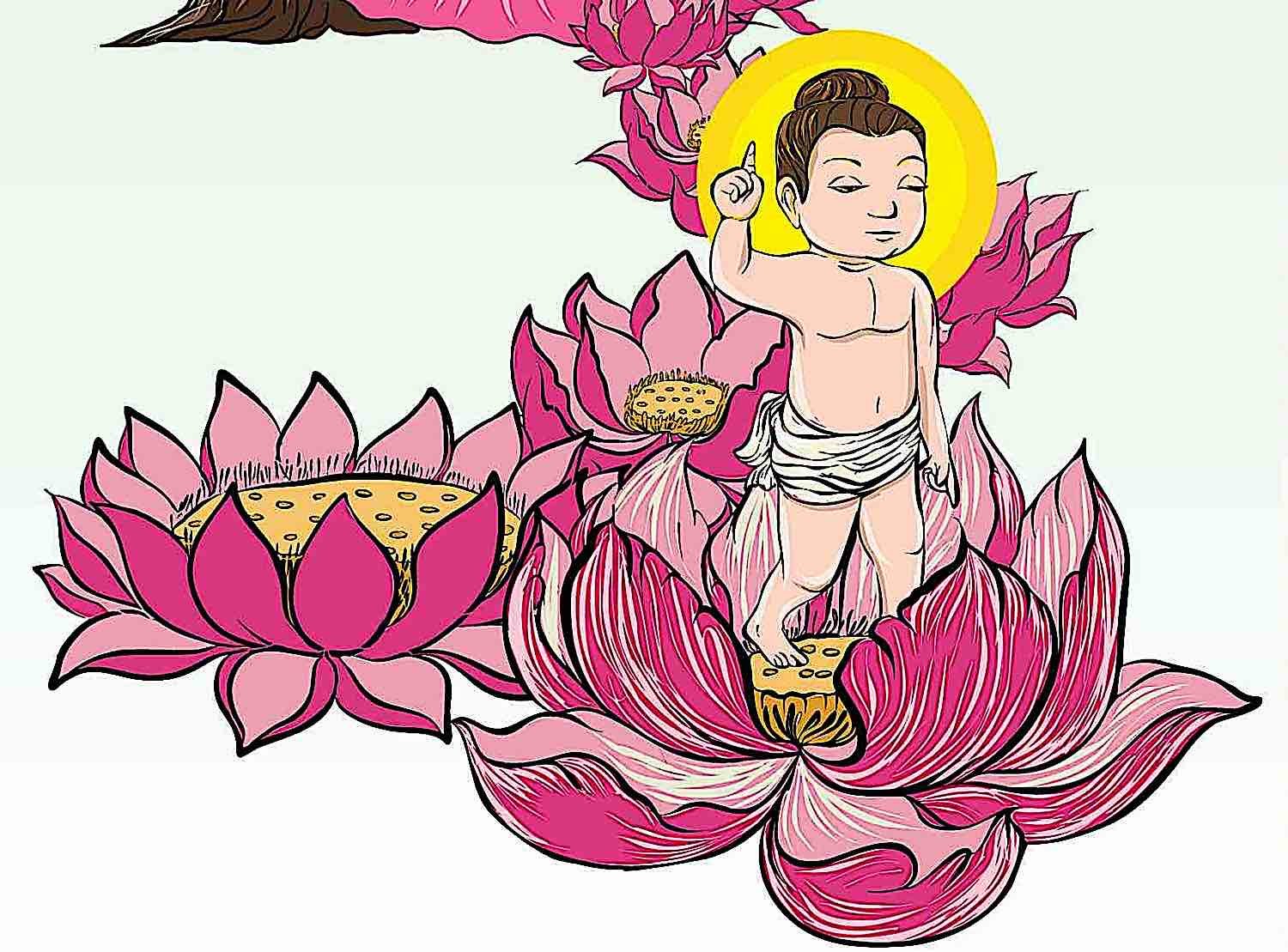 According to legend, Baby Buddha took seven steps to each of the directions immediately after his miraculous birth.

Buddha was actually born Prince Siddartha, in Lumbini Nepal. According to tradition:

“Buddha emerged from his mother’s side, as she stood leaning against a tree, in a painless and pure birth.” [2]

He was named Siddartha (or Sarvathasiddha) — literally meaning “a man who achieves his goals” — by his father the king, who was determined he would be a great worldly king and conqueror, not a Buddha as predicted by the sages. His mother passed away, and he was brought up by his aunt Mahaprajapati. 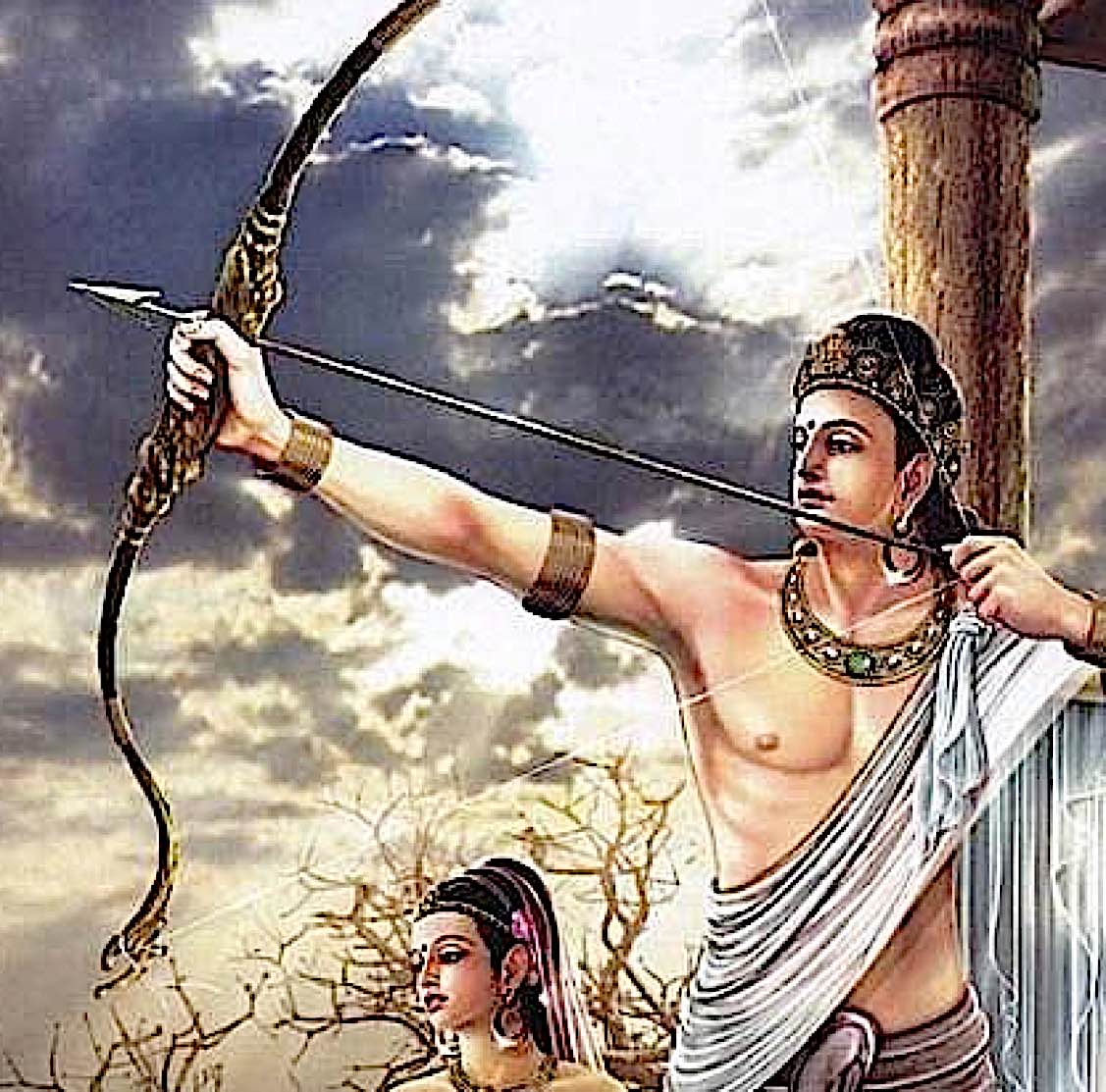 Siddartha Buddha grew up in the palace and was an expert in martial arts.

His father the king determined he must be sheltered from the suffering of the world to remove any causes that might arise compassion in the young prince. True to his father’s aspirations, he was brought up a privileged prince, sequestered in the palace. He was married to young Yasodhara, who conceived their son Rahula.

Siddartha grew up in Kapilavastu, the capital, and became very accomplished in “kingly arts” including the martial arts. 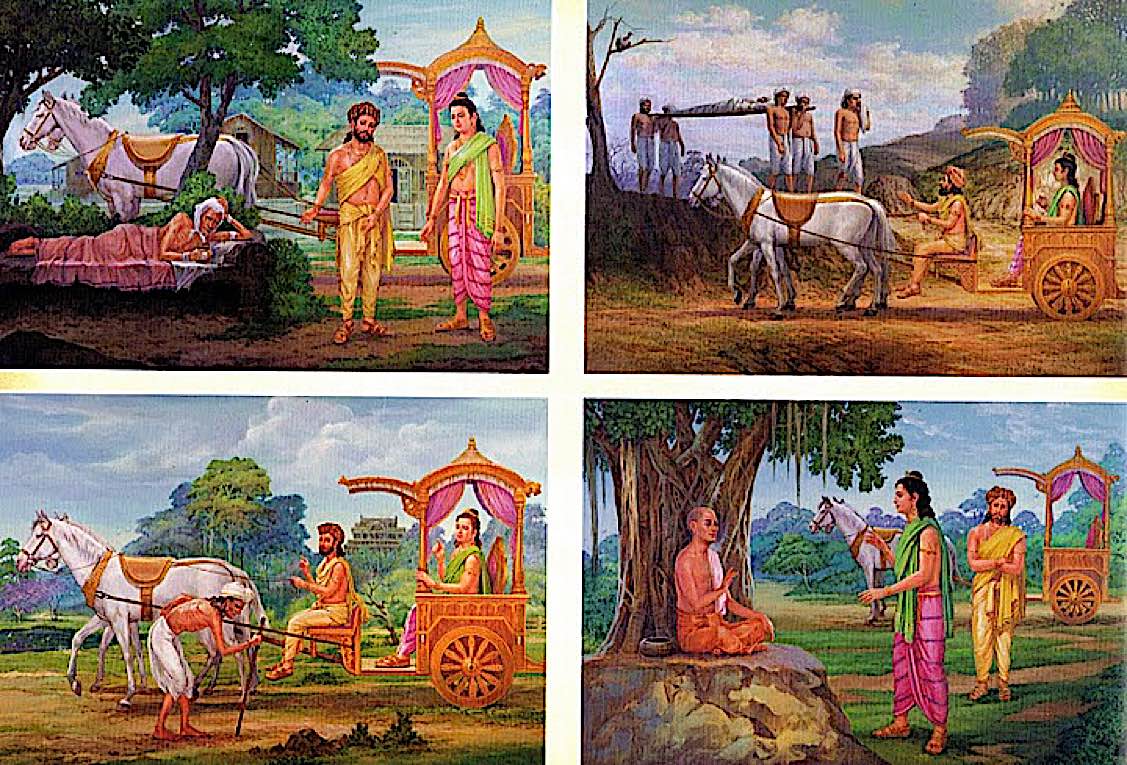 True to predictions of the sages — and despite his father’s fiercely protective tactics — Prince Siddartha escaped the palace and saw the four sights of suffering: poverty, illness, old age, and death. He also saw religious ascetics. His “existential crisis” [2] led to his life’s mission — to release the world from all suffering. 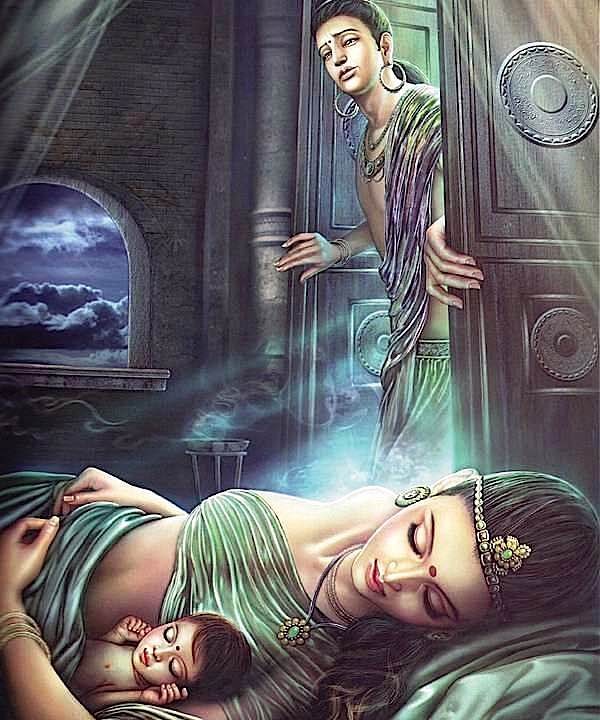 Buddha determines to leave his wife Yasodhara and son Rahula to seek Enlightenment — to release them from ultimate suffering in Samsara. Later, they both become his followers.

With compassion awake in the young Prince Siddartha, he became driven to overcome the suffering of Samsara. In a dramatic moment, Siddartha determined to leave home — quietly leaving the palace to avoid his father’s guards. He knew he must abandon his conventional, privileged life, to seek the answers that would save all beings from the eternal cycle of suffering.

Dramatically, he left his beloved wife and child — knowing he must for the ultimate benefit — cut his hair and left behind even his inseparable horse. Cutting his hair was a symbol of leaving behind his ordinary life. He traveled south, seeking out other spiritual seekers, and ended in Magadha (current Bihar) where he begged on the streets. 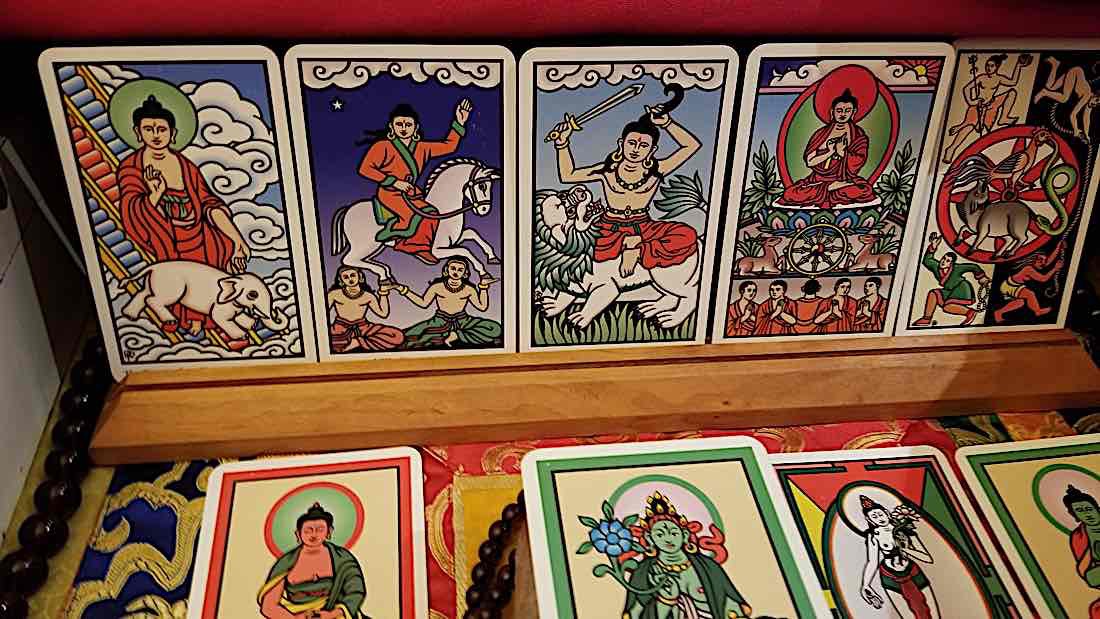 Buddha Tarot by Robert Place features the life and journey to Enlightenment of Siddartha Buddha as the major Aracana, in place of the “fool’s journey” to spiritual enlightenment. On the top (left to right) are the white elephant that descended to Queen Maha in the conception dream, Siddartha leaving the palace on his horse, Siddartha cutting his hair to become an ascetic, then Buddha’s first sermon.

Like most spiritual seekers, Siddartha sought out and trained with many meditation teachers — notably “the masters Ālāra Kālāma and Uddaka Rāmaputta” [2]

He learned and mastered with the best of the great sages of the time, attaining great realizations, but not the ultimate solution. He determined they did not have the final “permanent” solution, and decided he must seek the solution on his own. 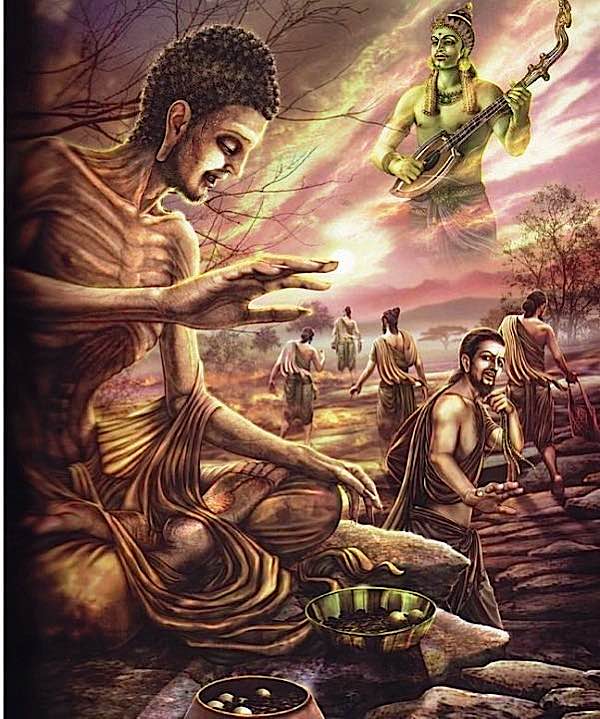 Buddha as the ascetic. Buddha starved himself eating only a grain of rice a day, seeking the answers through the ancient practices of asceticism.

Asceticism was an extreme form of practice that included living in the wild without protection, extreme fasting — basically, an attempt to “down the physical influence of one’s being and release the soul, an insubstantial essence in each individual.” [2]

He continued this until he was nothing but dry skin and bones, close to death. 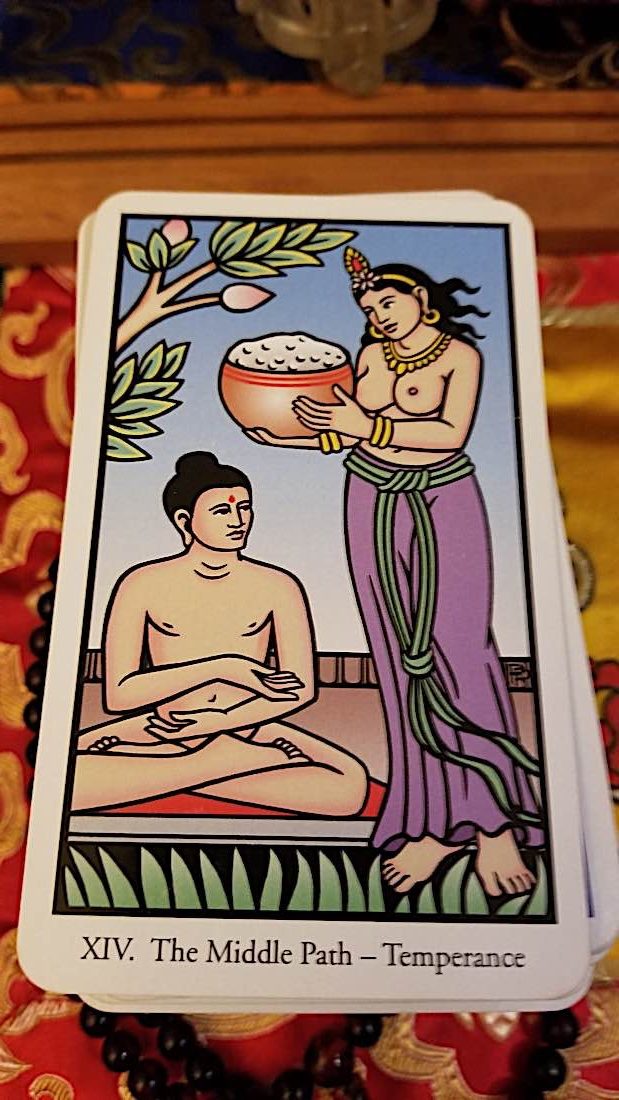 In Robert Place’s stunning Buddha Tarot, card XIV illustrates the moment of insight of the Buddha, after he had endured starvation and ascetic practices, that the “middle way” is the path to Enlightenment. Here, he is offered a bowl of rice at just that moment.

Pushing his practice to the extreme, he tried every extreme meditation and practice — together with five other ascetics — only to nearly die of starvation. Finally, he realized the “middle way” was the correct path to Enlightenment — neither the extreme of deprivation nor its opposite of luxury. Barely able to move, he accepted a tiny bowl of mik, rice from a devotee named Sujata. From that moment, he pioneered the “Middle Path” now known as “Buddhism.” 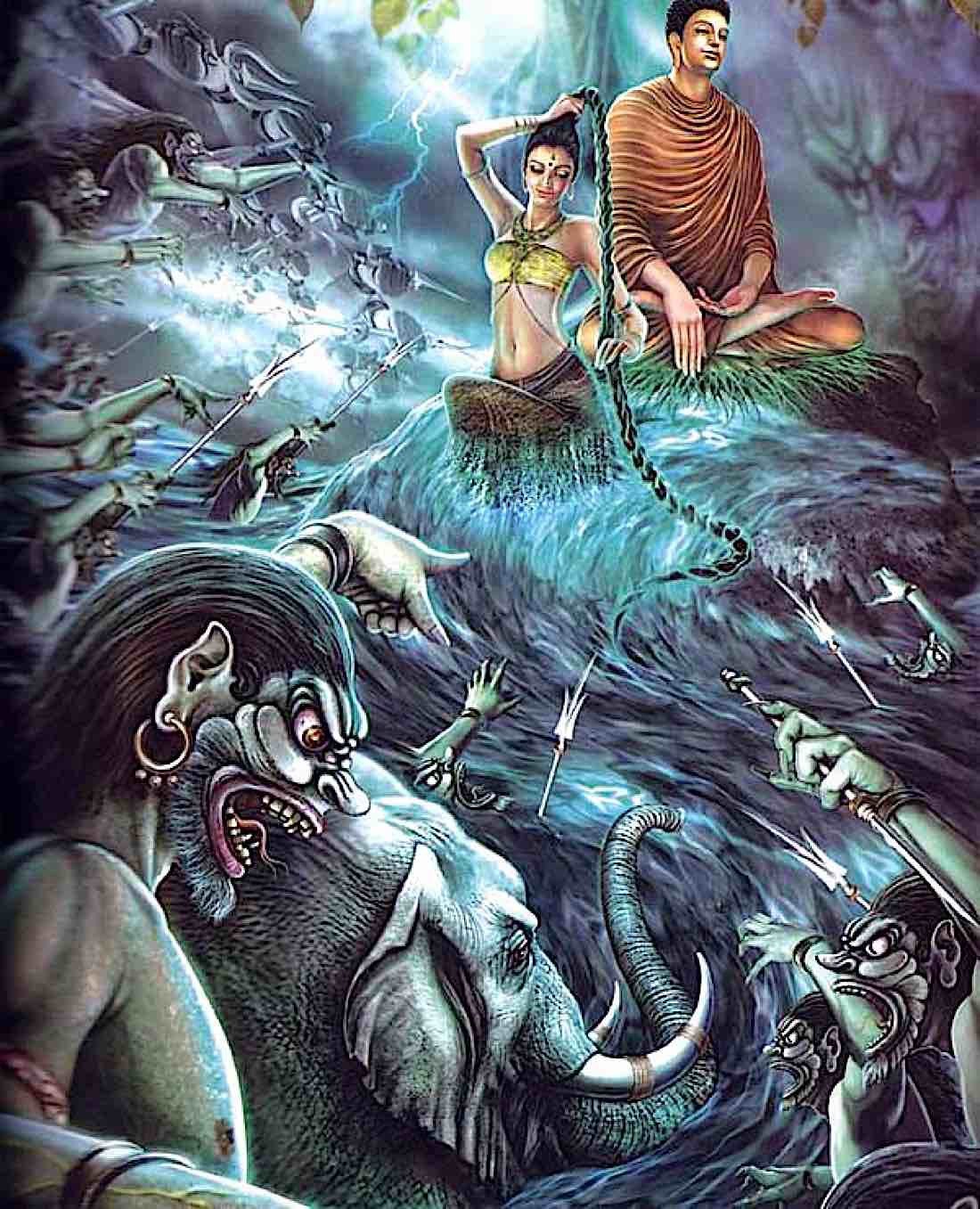 Mara’s army is swept away by a flood of merits. The Earth Mother rings out her hair releasing the torrent. In each of Buddha’s many lifetimes as a compassionate Bodhisattva, he accumulated drops of merit — released now as an epic flood on the day of his Enlightenment.

At Buddhism’s most “famous” site, Bodhgaya, Siddartha found the liberating path. Rejected by the five ascetics, he ate modest meals, recovering his strength, then moved to a new meditation site under the most famous tree in history — the Pipal Tree of Bodh Gaya. [A decedent of this tree is still honored today in Bodhgaya.] 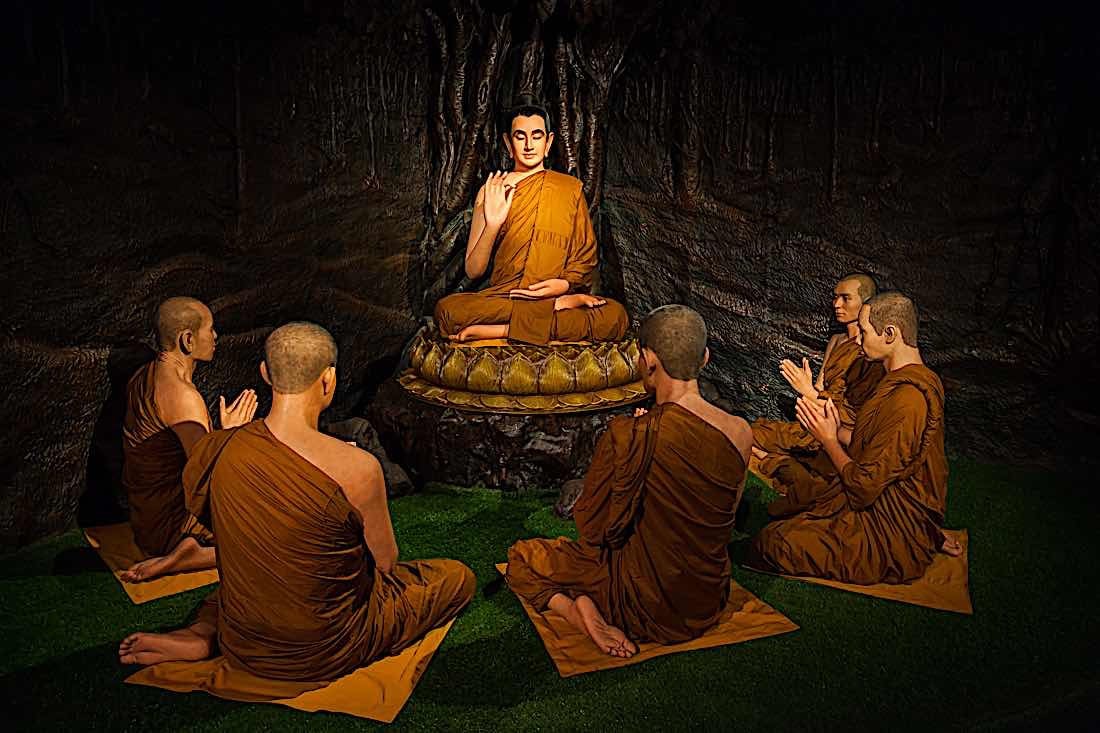 The Buddha teaching — his first teaching was on the Four Noble Truths.

Buddha “turned the first wheel” of teaching, determined to help others with his perfect methods. His first pupils were the five ascetics who had earlier rebuked him. His first teachings were the Four Noble Truths, and the Eightfold Path:

Buddha first taught the Four Noble Truths, the Truth of Suffering, metaphorically, the “disease” we are treating. 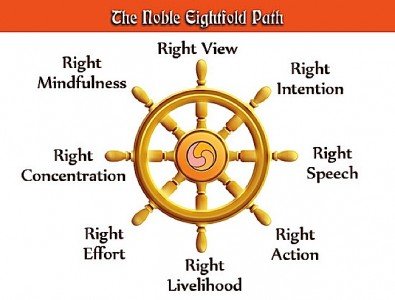 • For a feature on the Four Noble Truths and Eightfold Path, see>>

The Buddha continued to teach for 45 years to a growing group of committed monks and lay disciples.

Buddha traveled with a growing entourage of disciples, teaching for the next 45 years. These precious teachings, recorded by his pupils, became a vast body of Pali Sutta, and later Mahayana Sutra — the largest collection of spiritual teachings in history. His teachings would spread throughout India, China, Japan, Korea, and all of Asia — and ultimately around the world. 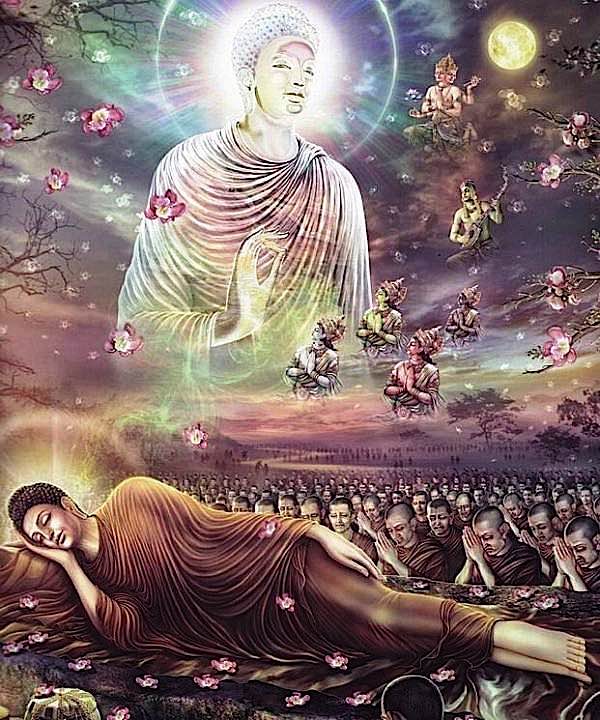 Shakyamuni Buddha practiced the eightfold path and taught it to his disciples. He attained Enlightenment.

At the age of 80, he decided it was time for him to leave the teachings to his Sangha of disciples. He gave his last teaching. He asked his disciples if they had any last questions for him before he left.

Finally, he said, “Things that arise from causes will also decay. Press on with due care.”[3]

He lay down on his right side, with his hand under his face — in the pose made famous by the Sleeping Buddha statue — and passed into the peace of ultimate Paranirvana. 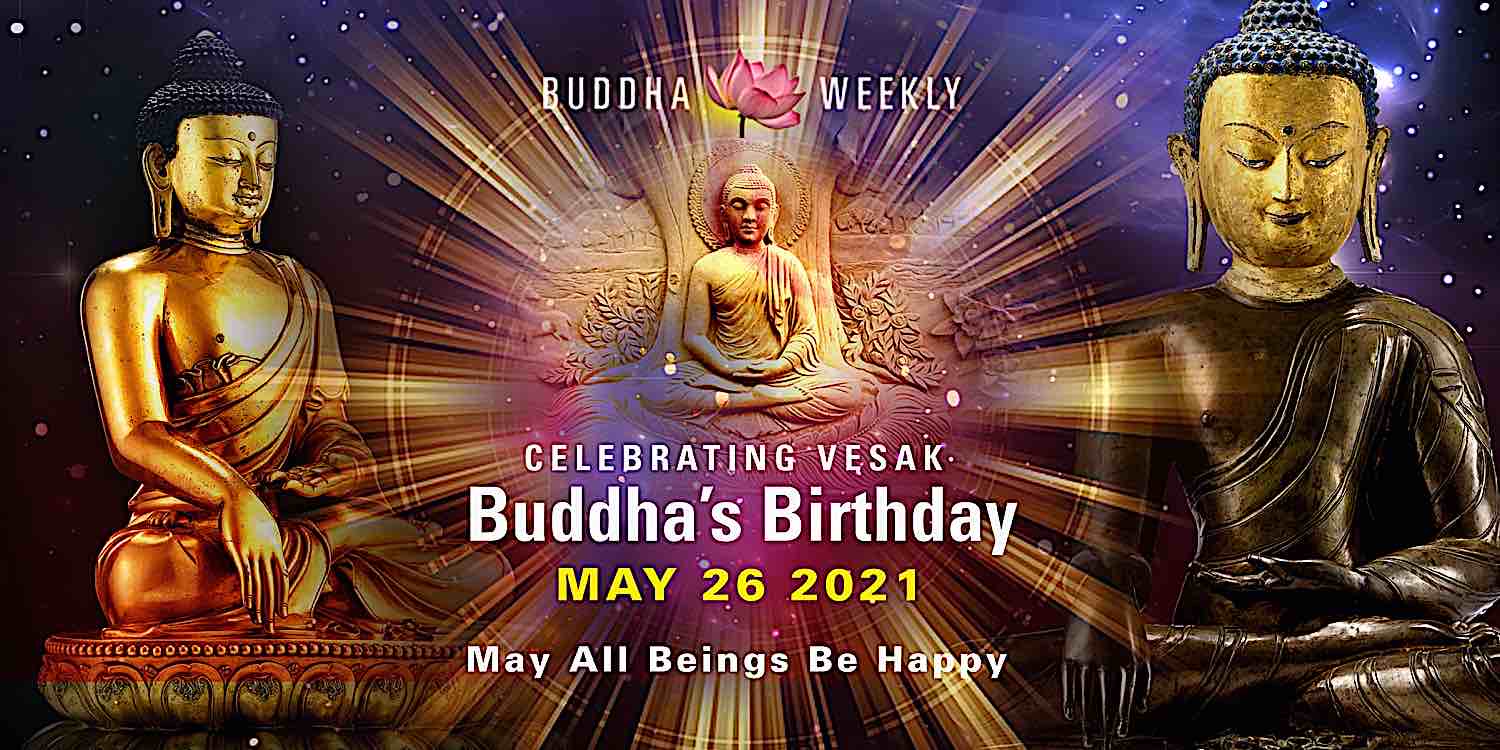 Vesak 2021 May 26 Happy Birthday Buddha! May All Beings Be Happy!

[2] BBC: Life of the Buddha, a Spiritual Journey>>

[3] The Vision of the Buddha: The Path to Spiritual Enlightenment, by Tom Lowenstein.