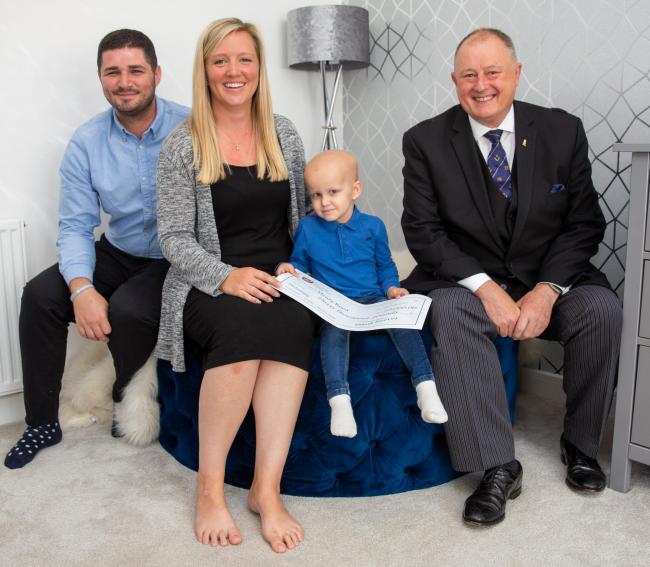 A THREE-YEAR-OLD boy with cancer will be able to get life-saving treatment in Germany thanks to a generous £30,000 donation.

Henry Hall, from Great Wakering, was diagnosed with brain and spine cancer back in February and has since undergone numerous rounds of chemotherapy treatment.

Radiotherapy is the only treatment that can save Henry’s life, prompting his parents to seek help to raise £60,000 for the least damaging form of treatment – proton beam therapy – which is not available on the NHS.

Essex Freemasons saw the Echo’s story about the family’s fundraising mission for Henry and generously donated the remaining £30,000 needed for the lifesaving treatment.

Henry’s mum, Louise, said: “I just couldn’t believe it. I never expected it at all. The relief was like this cloud has been lifted “It’s taken a massive weight off our minds because we can concentrate on everything we need to do to take care of Henry and our family rather than worrying about how we were going to afford the treatment.

“There’s no worry now about what we would do if we didn’t raise the money.

“It was lovely meeting the Freemasons. They were so down to earth. They made out like it wasn’t a big deal but it really is to us.

“Henry’s dad, Cameron couldn’t believe it. He just cried and hugged me. We’re just so grateful.”

While Louise has been left over the moon by the donation made by Essex Freemasons, she’s also paid special thanks to every other person who has donated to help them smash their target.

She added: “It’s so overwhelming that all these people who don’t know Henry want to help.

“I just want to thank everyone for helping us to raise the money and for holding Henry in their hearts.”

He said: “It was really humbling meeting him. He’s a lovely young lad and I’m pleased we have been able to have the funds to make a difference to his life.”