Five Wisdom Dakinis: “The source of the five activities is the dakini” —Padmasambhava

What are the Five Wisdom Dakinis? Why are they central to Tibetan Buddhist practice? Why are they associated with activity practices— peaceful, increasing, magnetizing, subjugating, and supreme activities — such as Chod?

“The source of activity is the dakini and there are five kinds of activities, peaceful, increasing, magnetizing, subjugating, and the supreme activity. The primary way to perfect these is through dakini practices, and among dakinis, there are the wisdom dakinis, in space, and worldly dakinis. These vast collections of practices can be condensed into those of the three roots, lama, yidam, and dakini. 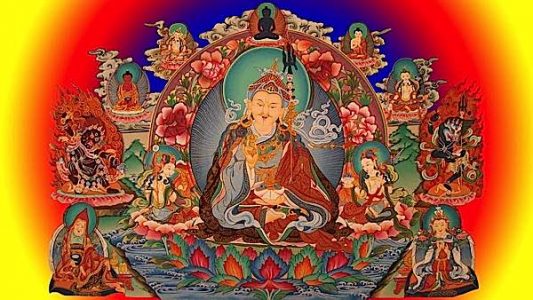 Note: Pema Khandro (Tib.) mentioned by Guru Rinpoche translates as Padma Dakini (Sanskrit. See below section for information), the Red Dakini of the Lotus Family (Amitabha’s family). Not to be confused with the teacher quoted below, Pema Khandro Rinpoche.

(Note: Amazon affiliate link. Price is unchanged, but we may earn a commission to offset our hosting costs.) 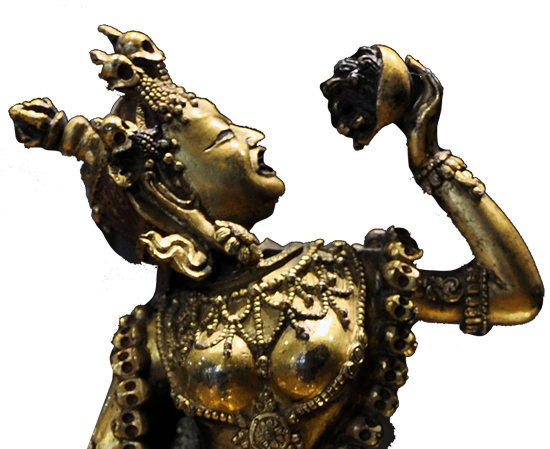 Vajrayogini is the Sarvabuddhadakini of the Dakinis.

Wisdom Dakinis Dance on the Perfection of Sunyata

“The notion of Dakini in the Great Perfection (Dzogchen) goes hand in hand with the teachings of the five elements and the five wisdoms. Each of these are represented by a variety of enlightened female figures, known as Dakinis, the Five Wisdom Dakinis.”[3]

Here, we’re focused only on Wisdom Dakinis, or Enlightened Dakinis. Just as people — or gods, or any being — can be either worldly (unenlightened) or “Enlightened” the same is true of Dakinis. Although we may have occasion to “run across” worldly Dakinis, in Buddhist practice, we are only concerned in this feature (and in most practices) with Wisdom Dakinis. [For more on Worldly Dakinis see the section below.] 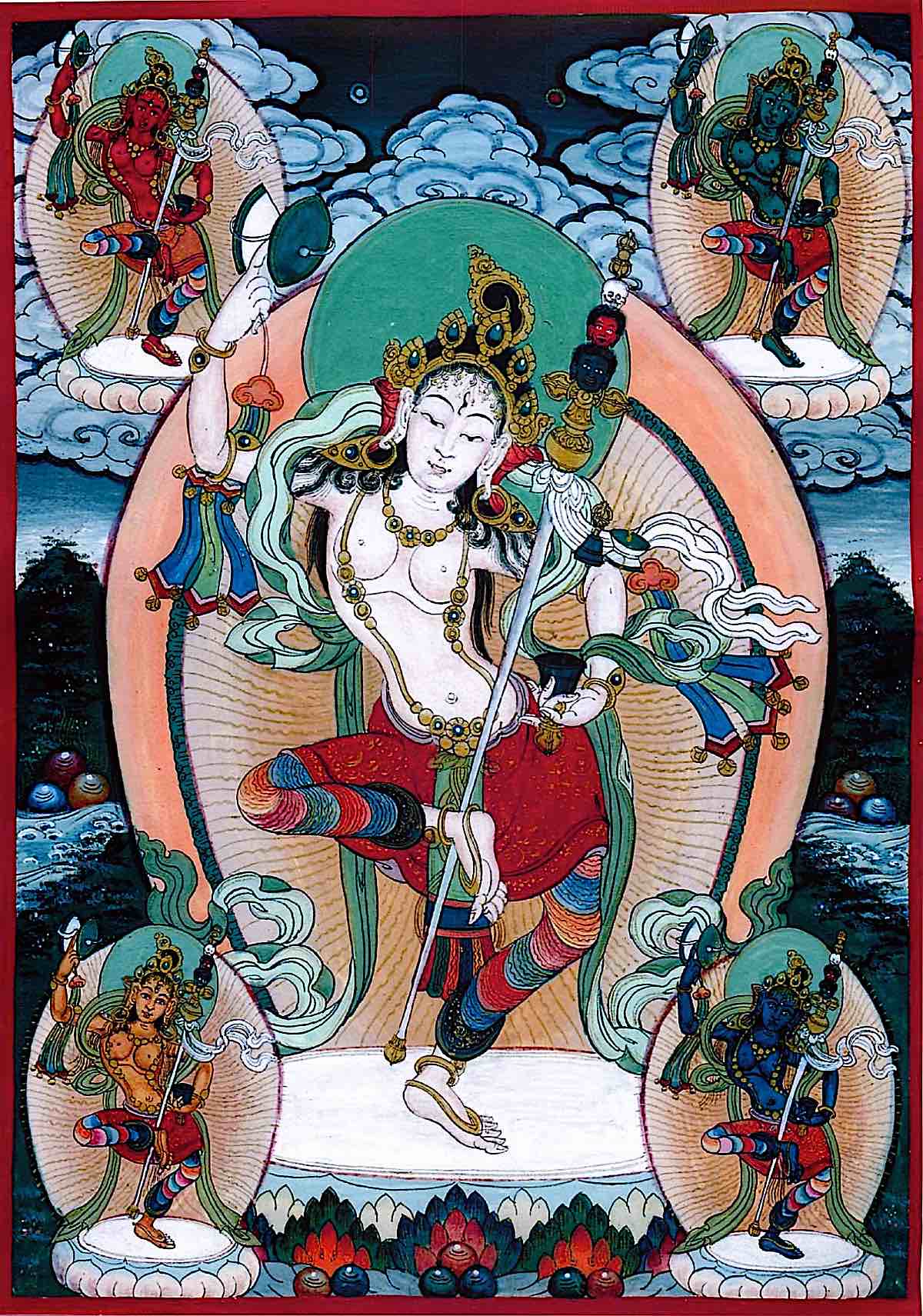 The five Wisdom Dakinis are a major part of Chod practices in many lineages. [See event note below. This image is associated with this Chod empowerment mentioned below.]

EVENT NOTICE: Rare opportunity to receive empowerment for Chod from Ven Zasep Rinpoche Feb 11, 2022 (6:30pm ET). Details on Gaden for the West site>> [More details in NOTES to this feature below.]

Or register on Eventbrite: ◆ Register: via Eventbrite https://www.eventbrite.com/e/chod-empowerment-with-zasep-tulku-rinpoche-tickets-254091312957 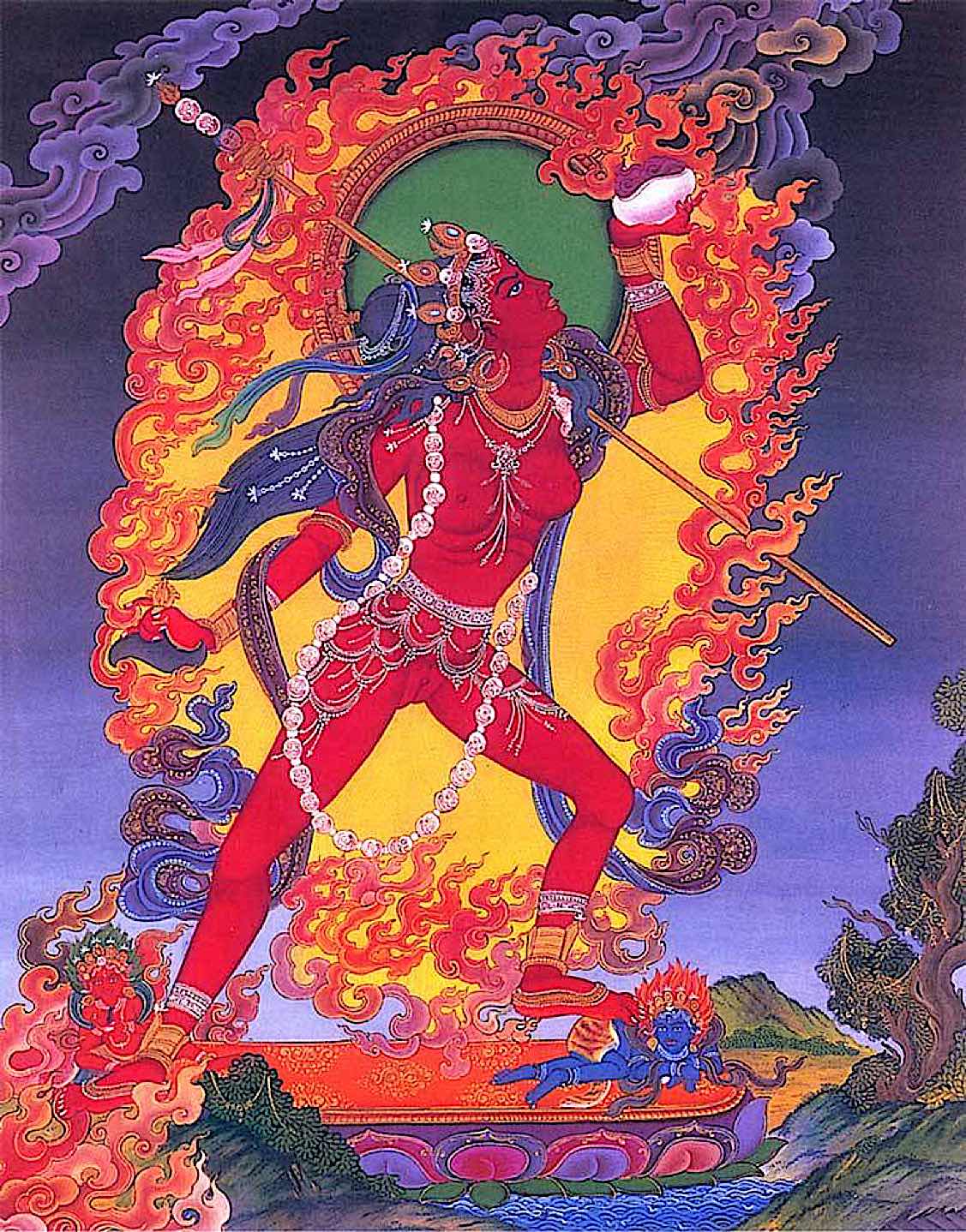 A beautiful Newari take on Vajrayogini. Vajrayogini is the “Queen” of all the Dakinis. They all arise from her essence.

Queen among them — Vajrayogini

Just as there are five Enlightened Buddhas, emanations of Vajradhara, representing the wisdoms that overcome each of the five poisons that afflict us, there are likewise five Wisdom Dakinis — emanations of the great sarvabuddhadakini Vajrayogini.

Venerable Zasep Rinpoche explains Chod and Dakinis. The Chod empowerment event described below on Feb 11, 2022 is organized by Rinpoche (details below):

In Tibetan, the Wisdom Dakinis are called Ye-shes mKha-‘gro lnga, and they are considered to be emanations of Vajravarahi who is an emanation of Vajrayogini. Vajrayogini, of course, is the Sarvabuddhadakini — meaning the “Dakini Whose Essence is That of All Buddhas.”

The five wisdom Dakinis are the “wisdom” counterparts of the Five Dhyani Buddha, who represent “compassion.” As the Enlightened Path includes both wisdom and compassion, these are inseparable — which is why the metaphor used is “consort.” Whether wisdom is the consort of compassion, or the reverse, is not important. It would better, perhaps, in modern context to think of them as co-equal aspects of one Enlightened concept. 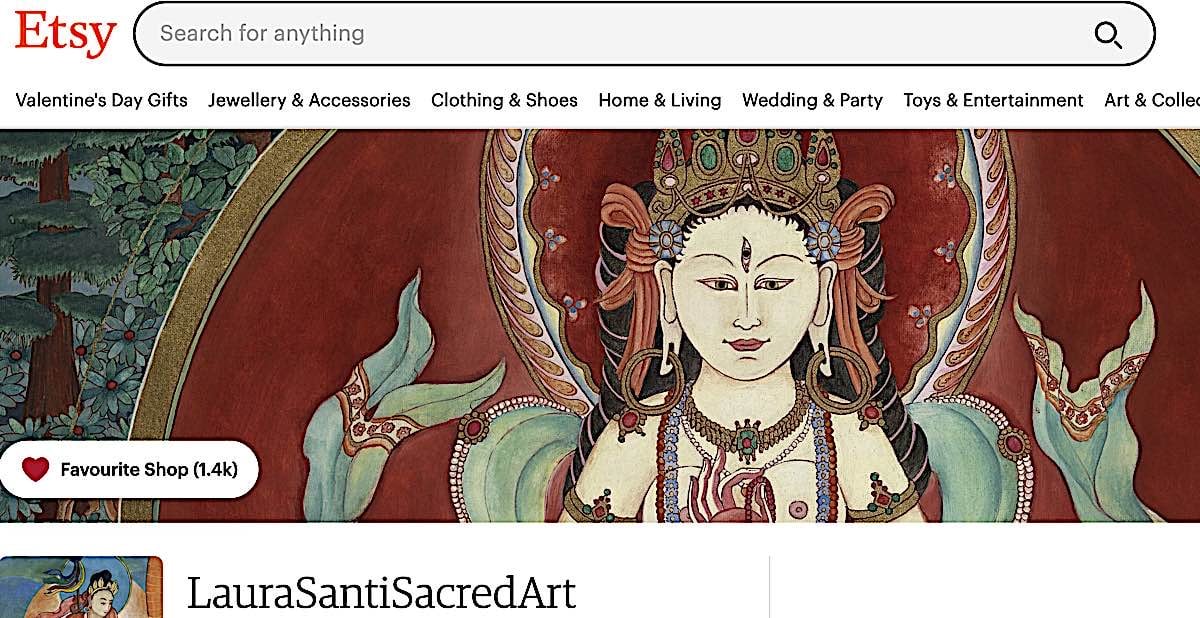 Illustrations in this feature by the amazing artist Laura Santi, used with permission. Please do not reproduce. Thankyou. If you are interested in her wonderful Dharma art, visit Laura Santi Sacred Art on Etsy>>

The Five Wisdom Dakinis, however, are clearly focused on Wisdom, therefore Mother (not by virtue of apparent visualized sex, but by virtue of focus of practice). The Five Dhyani Buddhas, on the other hand, focus on Compassion and method, although the “poison” and the “wisdom” are the same. 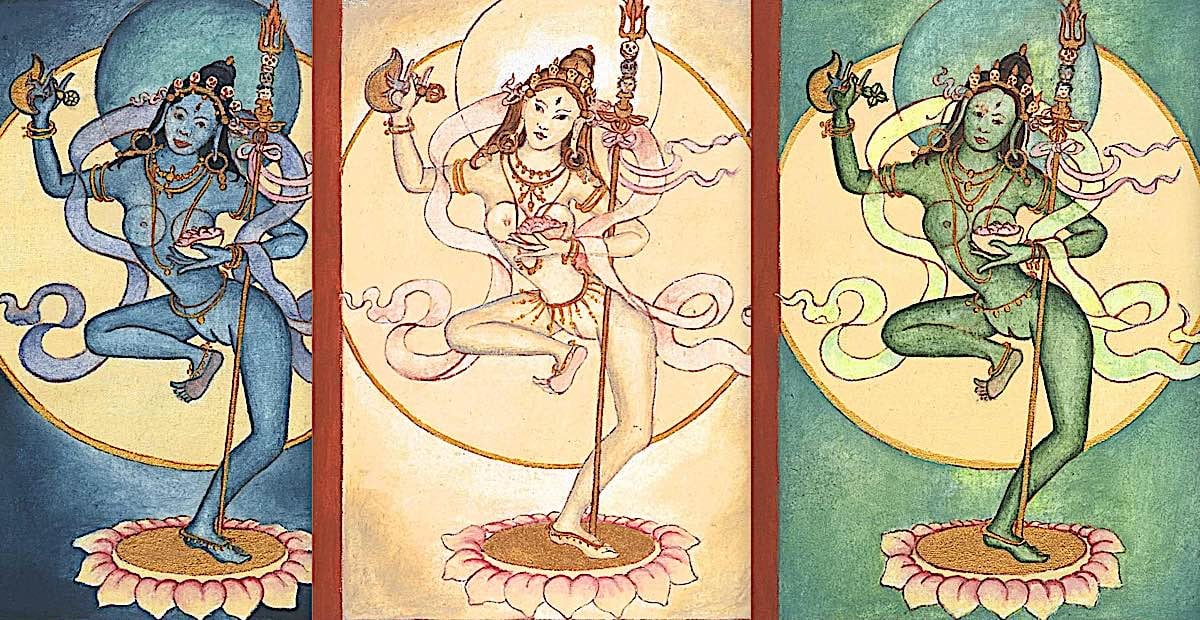 Three of the Five Wisdom Daknis, art by Laura Santi.

When the Sarva Buddha Dakini (Vajrayogini) emanates elementally, or in the context of focusing on specific poisons, She emanates as the Five Wisdom Dakinis. Likewise, when Vajradhara — the tantra aspect of Shakyamuni Buddha (or, Samantabadhra Buddha in some traditions) — emanates they first emanate as the five Dhayni Buddhas.

The Five Wisdom Dakinis, can be quickly summarized as: 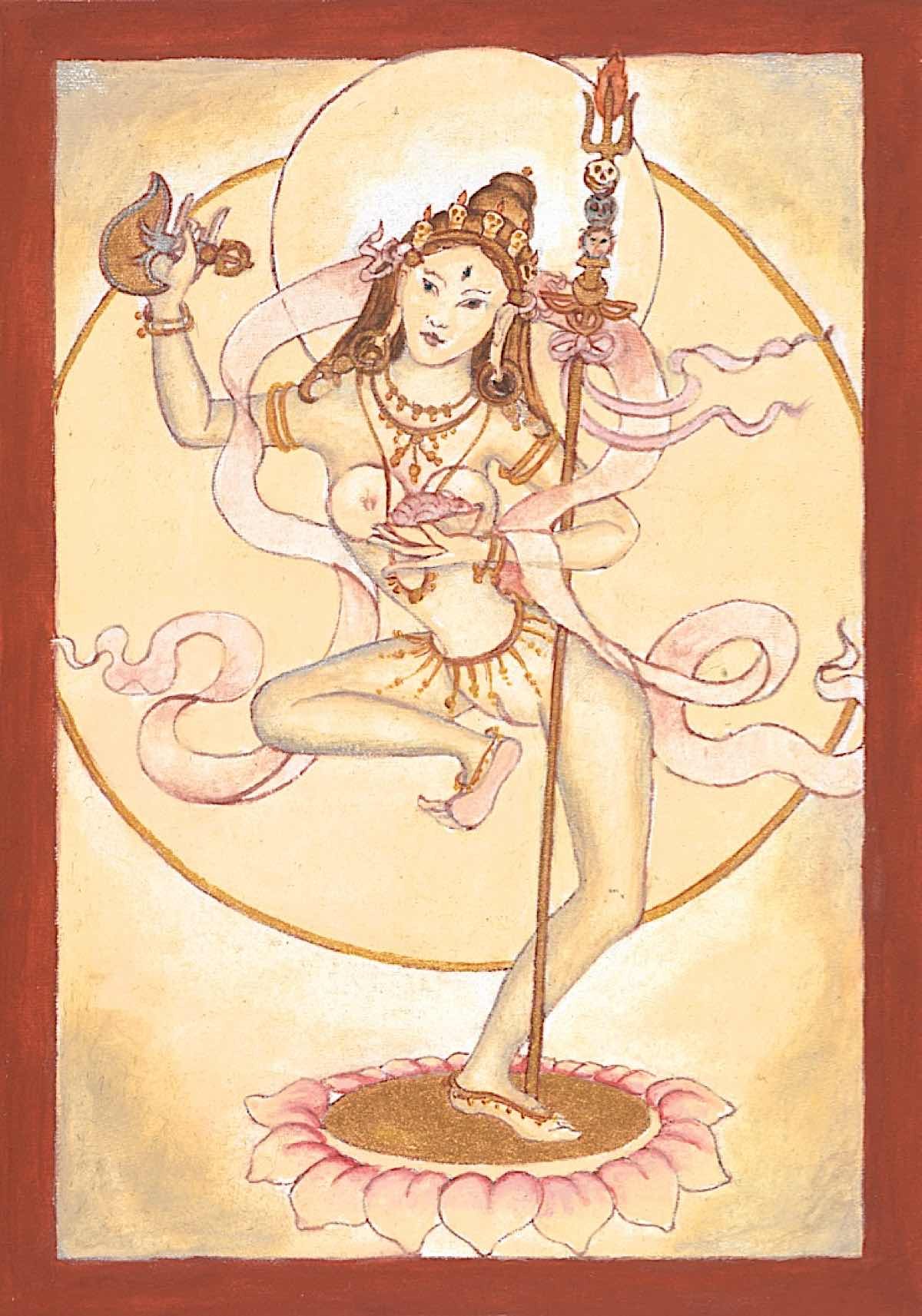 Buddha Dakini Akashadhatvishvari, the Wisdom Dakini of Universal Law — usually in the center, wisdom awareness, Dakini consort of Vairocana’s Buddha, white in color, the element of space or ether. 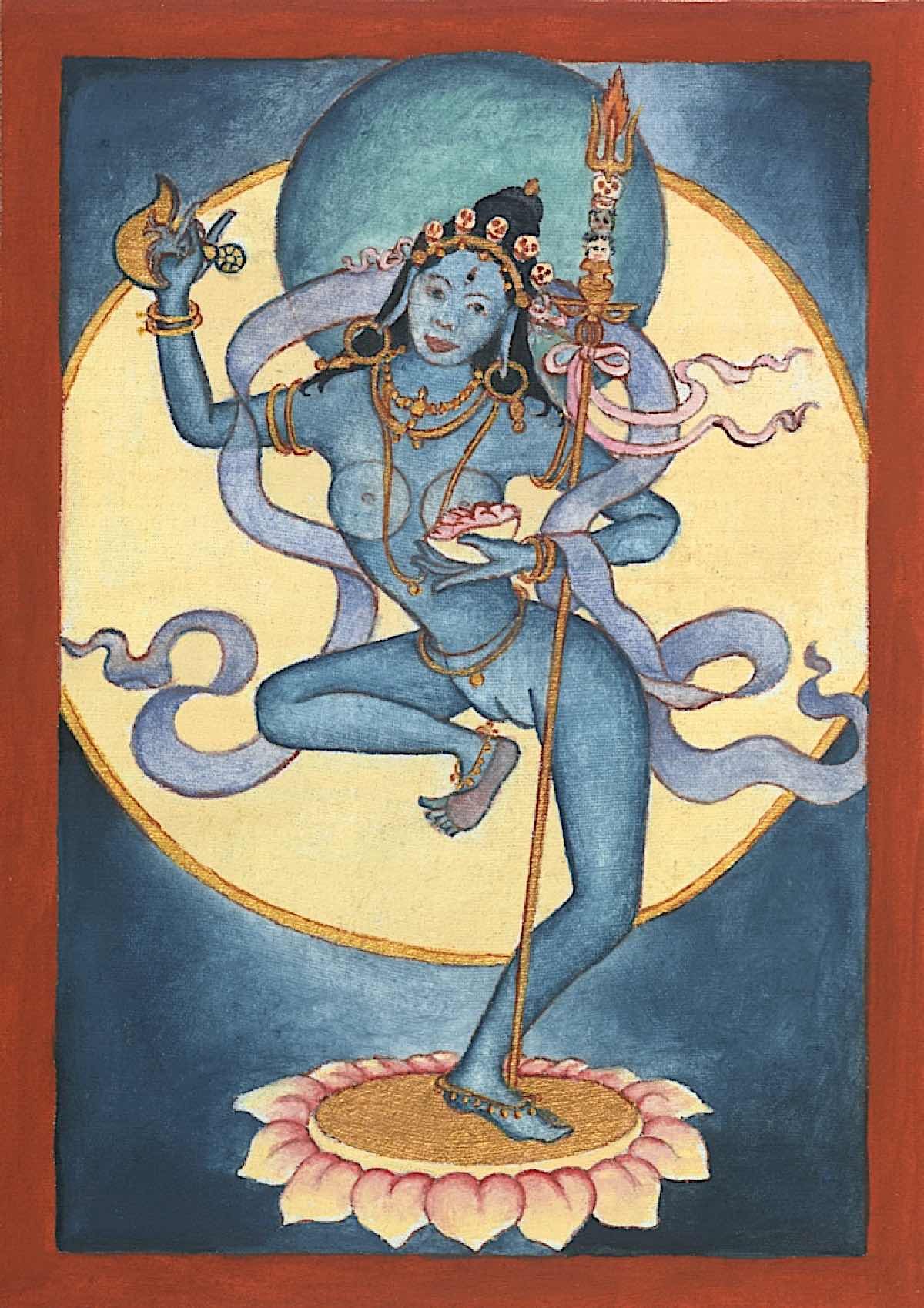 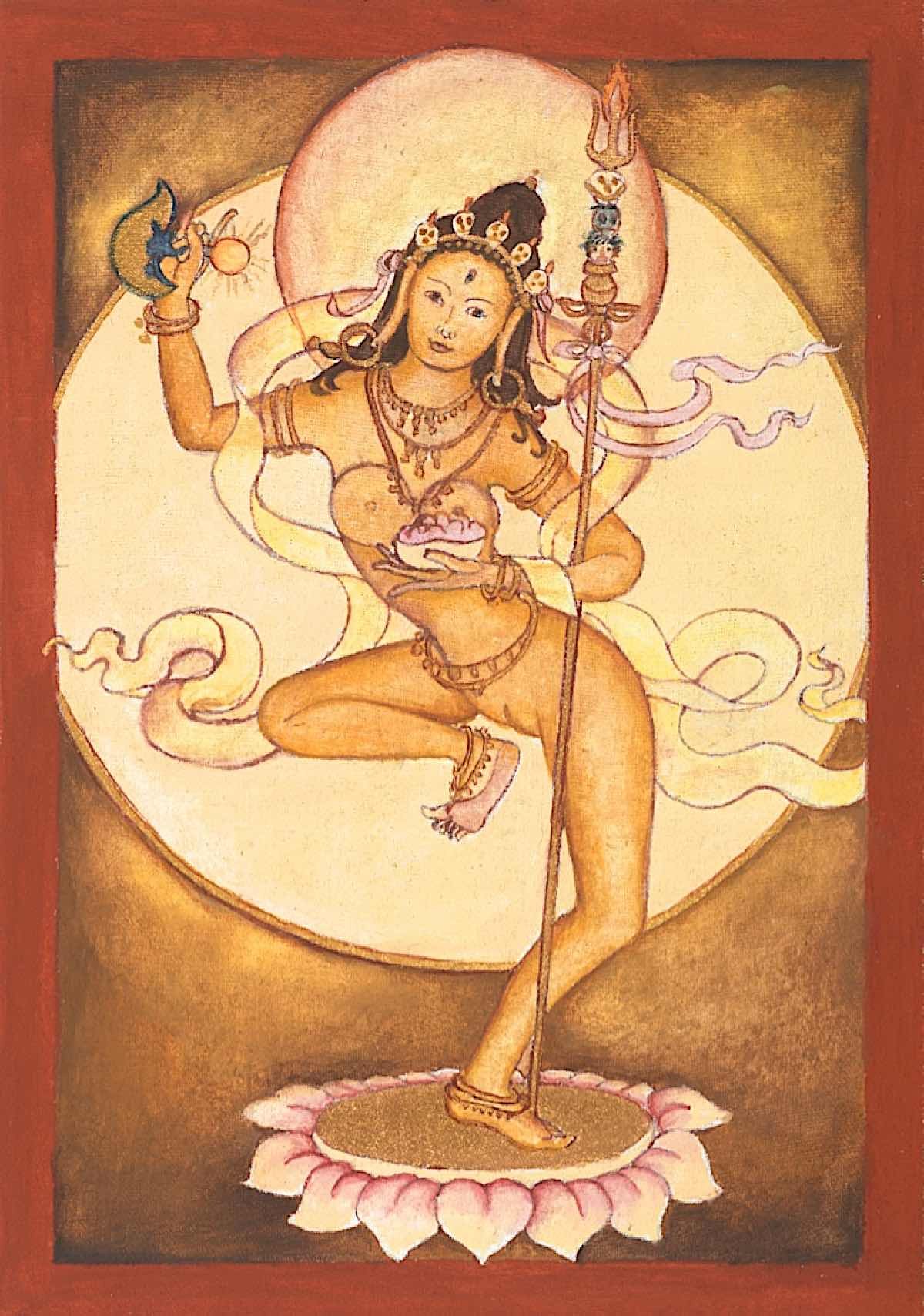 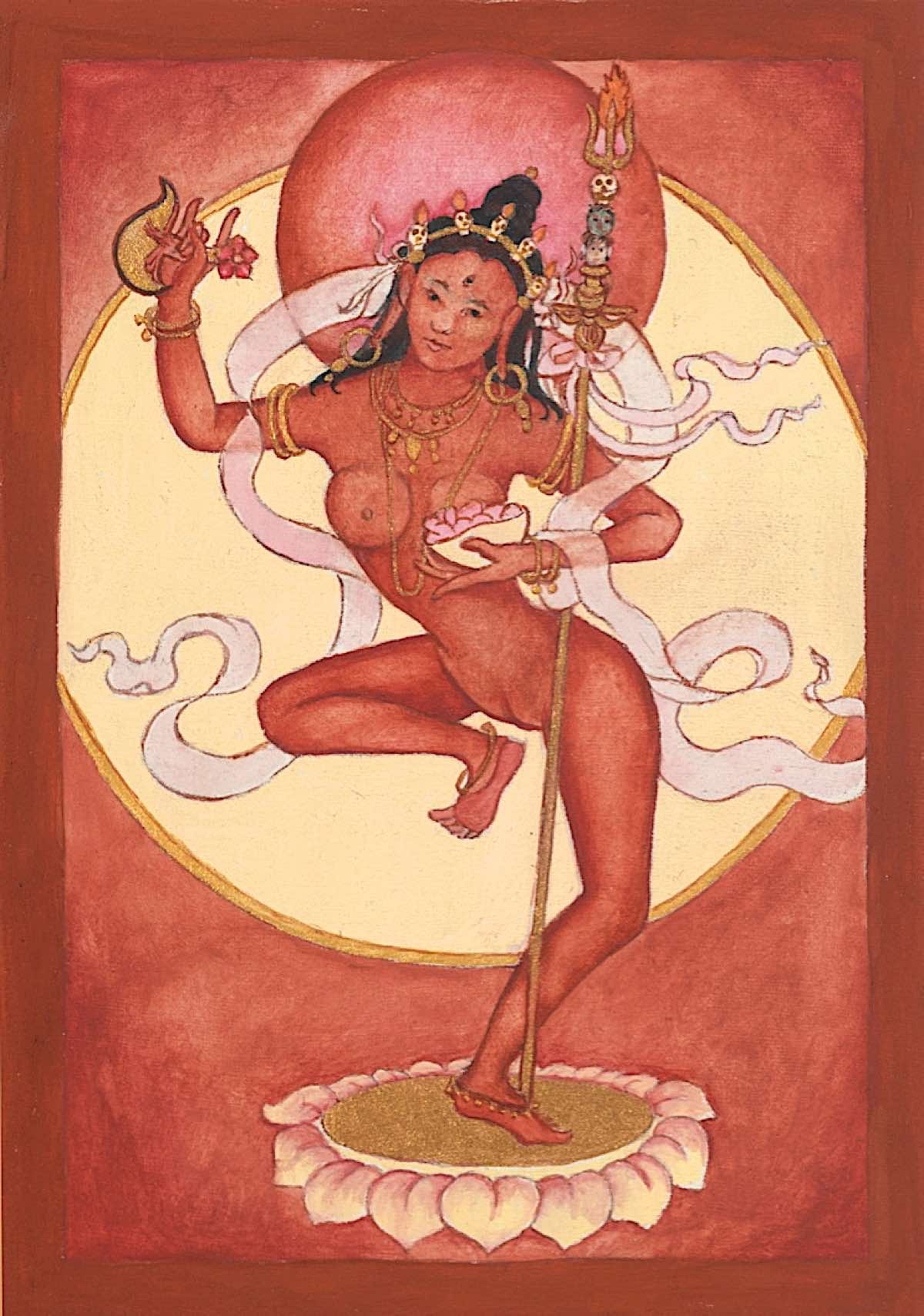 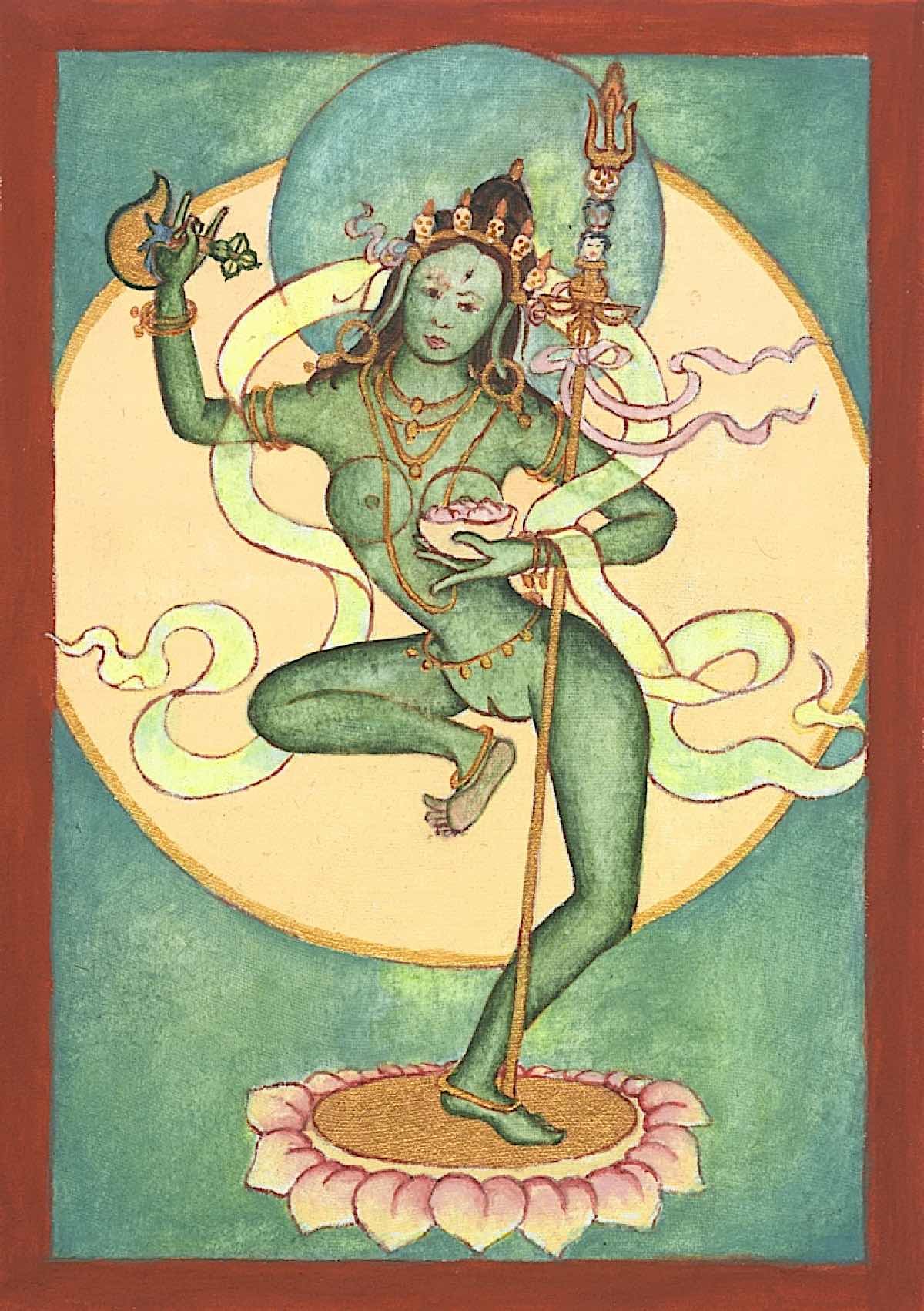 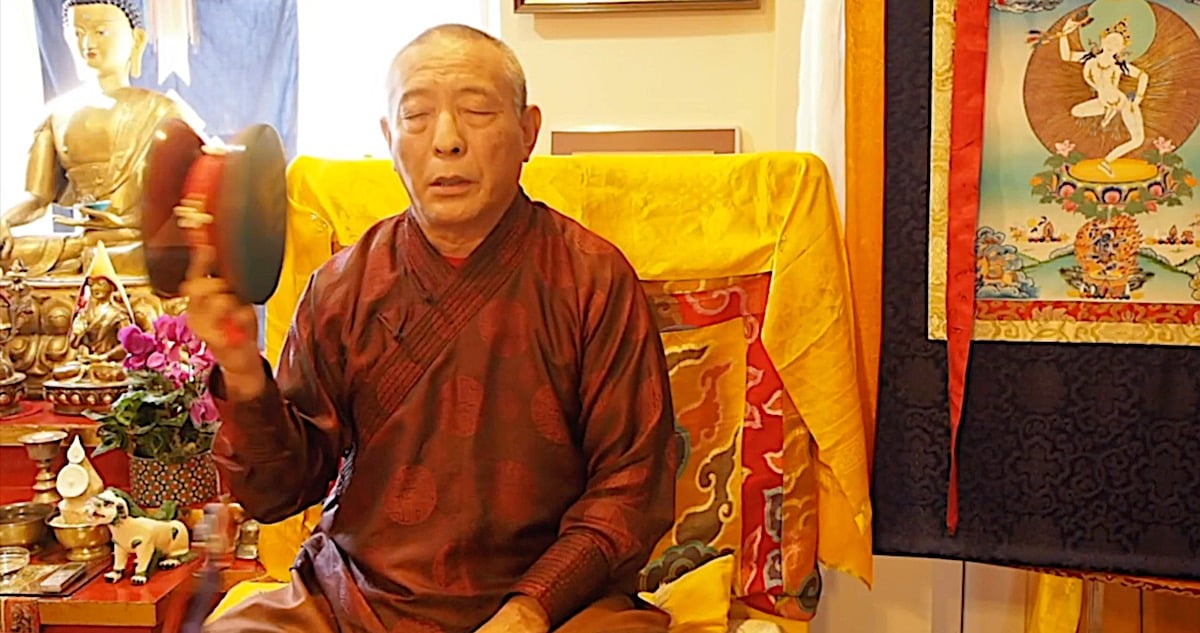 Zasep Tulku Rinpoche demonstrates chod. On the Tangkha to his left is Machig Labdron, the founder of this lineage of Chod, surrounded by the Dakinis.

Worldly Dakinis are not Wisdom Dakinis

Much of the misinterpretation of Dakinis arises from the “sky-goer” translation of the name. In many early western translations, this was associated with the idea of “angels” or “messengers” — which doesn’t fit the Wisdom Dakini except in the loosest possible sense.

Dakinis are certainly no angels, even in their Wisdom form. The Wisdom Dakinis certainly embody Wisdom — which means they far surpass the non-Enlightened angel. The sky they dance on is Sunyata, emptiness. They have overcome the kleshas, the poisons, transformed by the luminous energy of Wisdom and non-dual awareness. They are Enlightened Buddhas. (The Worldly Dakinis, which is not the topic for this feature, are just like us — unenlightened.)

The “sky goer” translation is perhaps better translated as “Sunyata dancer” or “Movement in Emptiness” or any other lofty, esoteric translation, In truth, a handful of words can never describe the Wisdom Dakini — which is further confused by the notion of “worldly dakinis” — who, in turn, become vilified with translations such as “zombie” or “cannibal” or “sorceress.” A Dakini is none of these things — but can also be all of these things. It’s like describing a phoenix as a bird.

Wisdom Dakini, if they can be brought down to a few words might be best translated as “dancers on Sunyata, the insubstantiality of all phenomenon, where all manifestations are possible.”

They can be a “being” or a “notion” or an “energy” or a “symbol” or a “consort” or a “wisdom” or a…. you get the idea. Dakinis far surpass any attempt to pin them down to a few words of description. 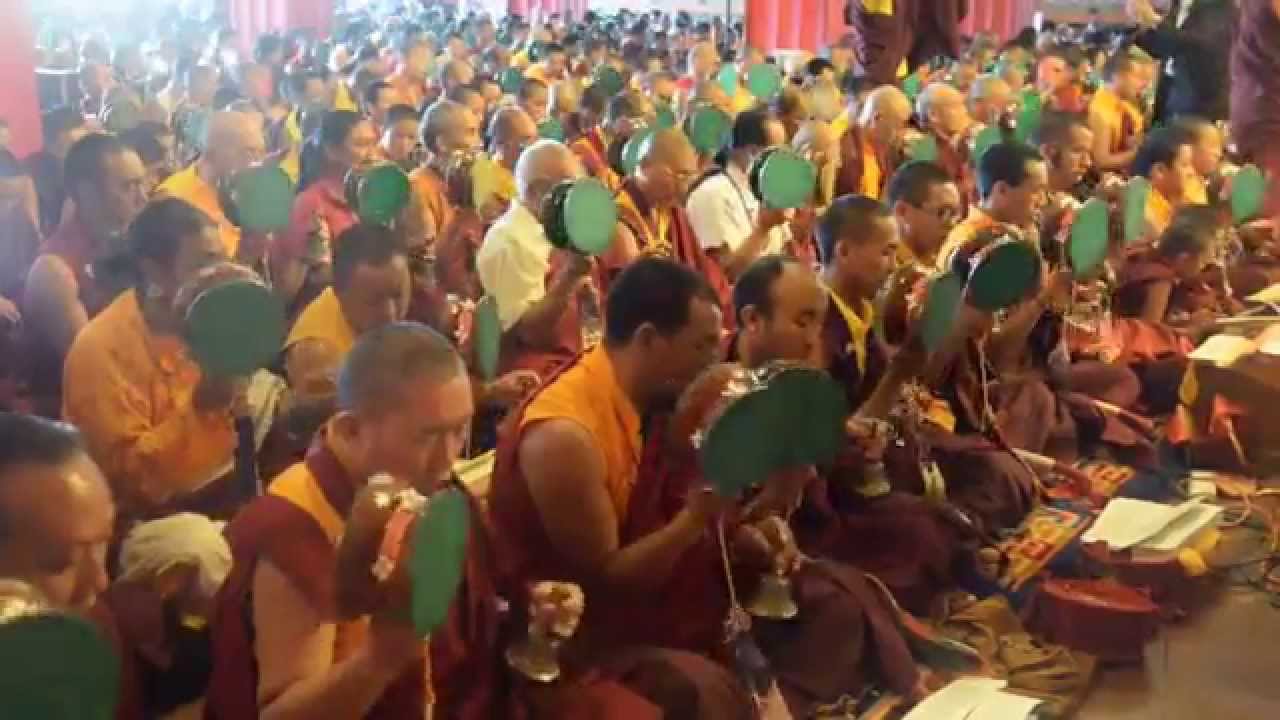 Chod practice by many monks. This active form of practice drumming is an advanced practice, combining activities with chanting mantras and visualizations.

Chod means to cut through the truly-existent “I”. Chod practice is an advanced skillful method that enables practitioners to become free of this clinging to the belief and false notion in a truly existent individual self. 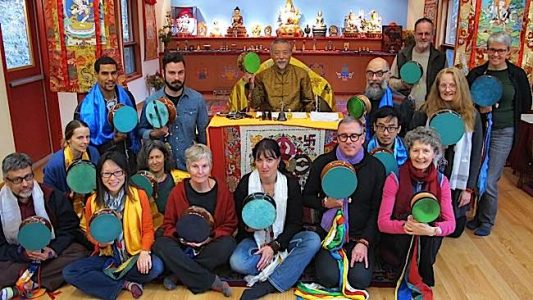 Venerable Zasep Tulku Rinpoche with students after a Chod teaching. “The Chod practice dispels negative mental states, which are our “demons.” The Chod practice transforms mental defilement into the wisdom of Bodhichitta and Shunyata.” — from a description of a Chod initiation event and teaching from Zasep Tulku Rinpoche, December 1, 2016, at Gaden Choling in Toronto.

Attachment and clinging to self, or  “I “, are sources of all kinds of mental defilements and suffering.  Chod is a profound practice that enables practitioners to understand the union of Bodhicitta and Shunyata.

Chod is not just a practice designed for wandering yoginis or yogis experimenting with their spiritual strength while being in romantic wilderness sites and scary places.

The teachings and practice of Chod are an advanced and effective means to help us cut our ego, tame our mental defilements and develop pure unconditional Bodhicitta for all sentient beings.

According to the Gelug tradition, Chod practice is aimed at enhancing our meditation on the three principal paths of Lam Rim: Renunciation, Bodhicitta and Shunyata wisdom. Chod practice is a higher Tantric practice and a Dakini Yogic sublime way of transferring our consciousness into the spacious and eternal bliss of Prajnaparamita.

Chod is a powerful healing practice for overcoming our fear, attachments, anxiety, anger, trauma and grief in this time of degeneration, with more people suffering due to the current direction of our society and world.

*All instructions (zoom link, schedule, sadhana etc) will be given to registered participants.”

[1] Dakini Activity: The Dynamic Play of Awakening, by Padmsambhava, the Lotus Born. On Amazon>>   (affiliate link.)