Highcliffe woman presented with mobility scooter after losing use of legs


Highcliffe woman presented with mobility scooter after losing use of legs

A young woman from Highcliffe, Dorset, who will probably never walk again has been presented with a mobility scooter from a lodge of Freemasons. 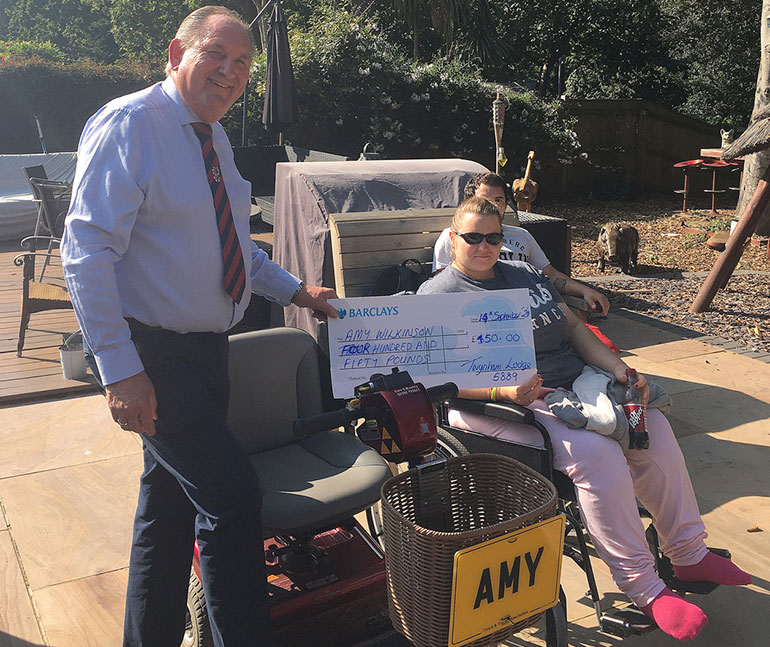 Amy Wilkinson, 21, was halfway through a course in childcare when in February she became paralysed while having a bath.

Following numerous tests, she received the news that she had been struck down with transverse myelitis, a condition that affects the spinal cord.

She returned home to face an uncertain future and when Twynham Lodge in Christchurch heard about the diagnosis they began fundraising.

They sourced a mobility scooter and collected another £450 to help Amy as she starts to rebuild her life.

Chris Lockwood, chairman of the local Freemasons, said, “The members of Twynham lodge are very active in raising money for causes – and when they were heard about Amy they were quick to act.

“Despite the lockdown they were able to raise money and not only buy a mobility scooter but were also able to present her with a cheque.

“Charity and helping the community are things that Freemasonry has at its core and I’m so pleased that Amy has been helped.

“To suddenly become paralysed from the waist down must have been a tremendous shock for Amy and her family.”

Rob Ings from Twynham Lodge said, “I know Amy’s mum and when I heard what had happened I decided to try and do something.

“Everyone was very generous – not only lodge members but others too – and collected donations and raffled a bottle of whisky. It’s great that she has a bit more independence.

“Amy is very courageous and is determined to walk again.”

Amy’s mum Jane Witcher said her daughter had already been out and about and they’d probably buy an iPad with the money.

The post Highcliffe woman presented with mobility scooter after losing use of legs first appeared on Freemasonry Matters.