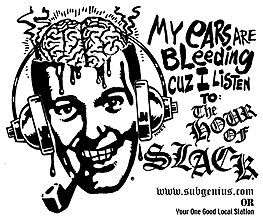 Before The Hour of Slack began airing in 1985, we produced thirteen 90-minute albums on cassette tape called Media Barrages. Some of those later became CDs, but not the first one. Tonight we’re excerpting Media Barrage #1, edited in 1981, when there were but a few dozen self-declared SubGeniuses on the whole planet. Only about eight or nine of them were on this ancient tape: Rev. Stang, Dr. Philo Drummond, Puzzling Evidence, LIES, Glassmadness, Pope Sternodox, Dr. Snavely Eklund, Hellswami Satellite Weavers, Janor Hypercleats, and the late Dr. X. In other words, this was our very first official SubGenius album, made 35 years ago, when the only known Doktor-Subs were in Dallas, Berkeley and Little Rock. Some clips are from the very first appearances of Ivan and Philo on local Dallas talk radio, in early 1980. Church slogans, one-liners and concepts that had gotten old for some of us — stuff that we now make fun of Bobbies for repeating — miraculously sound fresh again, when heard being said FOR THE VERY FIRST TIME!

The old TEXT LOGS of these ancient Media Barrages, scanned from the crumbling Xeroxes, can now once again be seen!

SIDE ONE of Media Barrage 1: http://www.subgenius.com/SubG_History/GRAPHICS/1981/SubGenius_Tape_Logs/image-html/1981-MediaBarrage_1_Log-a.html