Intergalactic Buddha: if Buddha was an alien from another planet, galaxy or dimension — or alternate reality — what would he be like? Compassionate and wise, regardless of illusory appearances.

In the Lotus Sutra (chapter 25) Avalokiteshvara Bodhisattva can take any shape, personality or manifestation — whatever is most suited to the beings to be helped. In the Flower Garland Sutra, Buddha teaches that there are unlimited universes, dimensions, and realities — and a Buddha in each one of them. If we let our imagination run wild — what would a Buddha in an alien world or dimension be like? We know one thing — s/he’d use skillful means, s/he wouldn’t necessarily be a “he” and whatever the manifestation, s/he’d be compassionate and wise.

This is meant to be a little on the “light” side, with a serious twist. In Buddhism, the concept of form as illusory — at least in Mahayana Buddhism — is a core teaching. 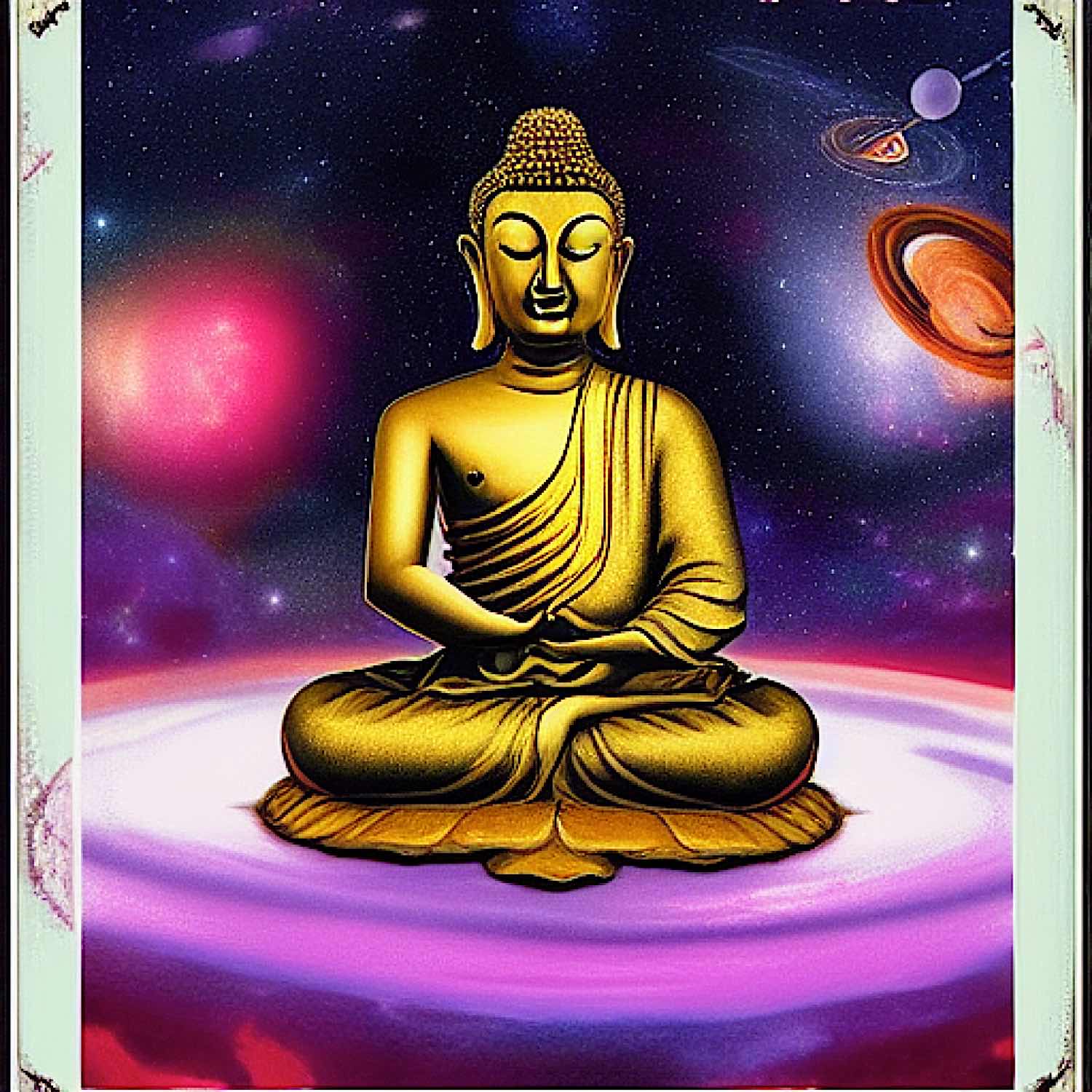 So, if Buddha was an alien, what would that mean about “form?” That it’s even more illusory than we thought? Or, that Buddha’s can manifest in any form in the relative worlds (Nirmanakaya emanations of Buddha).

Of course, we’re treading on the light side, here — but it does make you think, doesn’t it? 🙂

If Buddha was an alien

No doubt, considering the vastness of the multiverse and the endless nature of time, there have been countless Enlightened Beings. In Buddhist Doctrine, all beings — and this would include aliens from other world systems — have Buddha Nature.

The great Stephen Hawking — at a press conference announcing a $100 billion dollar project to fund search for alien life — once said:

“We believe that life arose spontaneously on Earth. So in an infinite universe, there must be other occurrences of life.” [1]

Even on Earth we have countless forms

Even on “earth” we have 108 forms (plus) of Avalokiteshvara, 21 and 108 forms of Tara, and Shakyamuni Buddha himself manifested in countless forms: wrathful, many-armed, peaceful, magnetizing. Why manifest in these ways? He might appear in an angry, zombie-like form to help us focus on our own anger. He might appear in a glowing, white form to pacify our illnesses. Whatever works for our own minds, needs, karmas and issues.

Likewise, an alien Buddha could take any form — and would most likely take the form of the natives of a given world-system. He/she would be whatever is most helpful to sentient beings in that world system.

We could speculate what an alien Buddha would look like all day (and night) long…but it’s really a moot point — because the form is not what’s important. The Heart Sutra famously says:

“Form is Emptiness. Emptiness is Form.”

What’s important is not the form — the Enlightened Buddha transcends all form — but rather, the mind of compassion and wisdom that knows no bounds and the enlightened activities which are spontaneously present to benefit all beings — including aliens from other parts of the cosmos (assuming as we are here, they exist.) 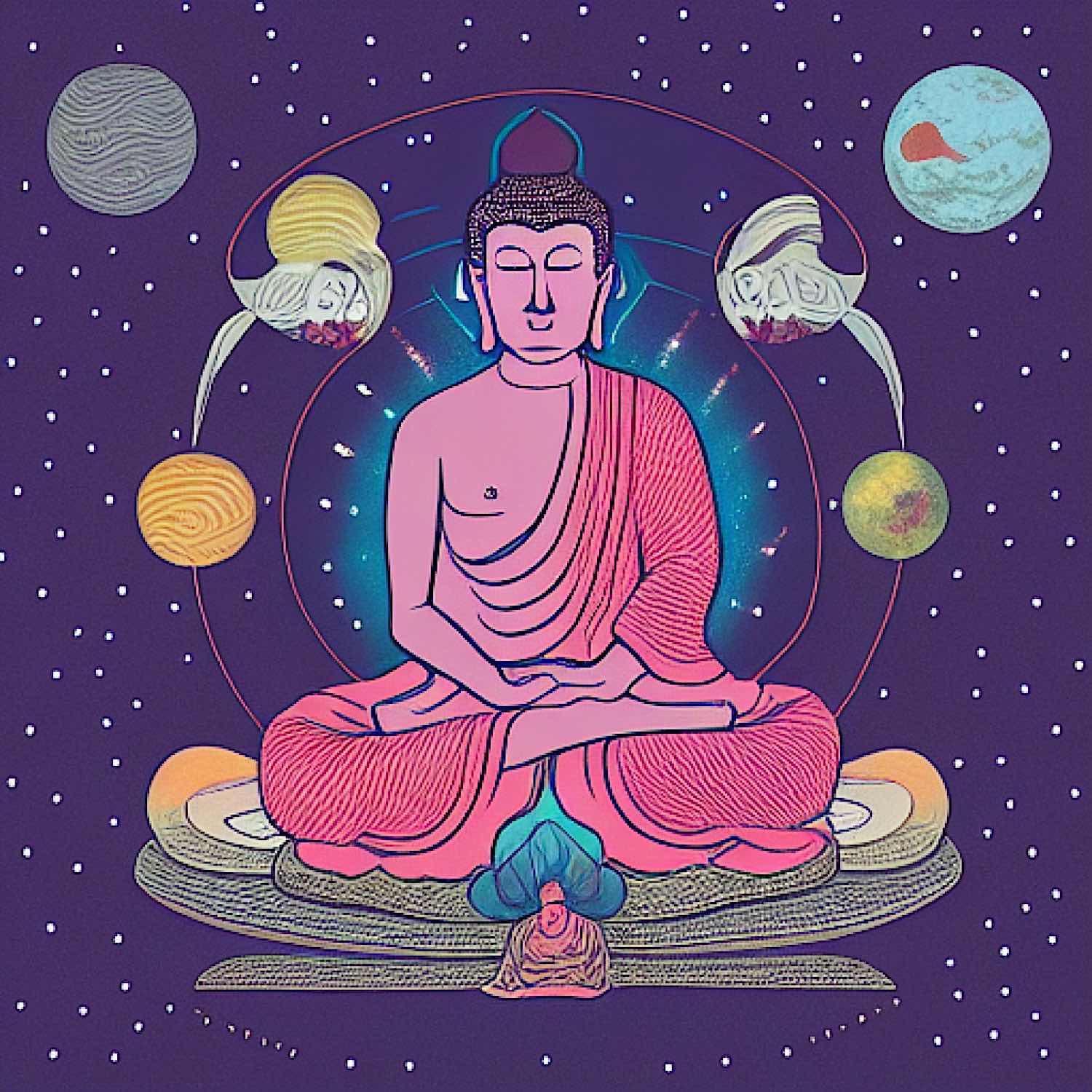 This is clearly stated in the Mahayana Lotus Sutra, chapter 25, referring specifically to the Enlightened forms of Avalokiteshvara: 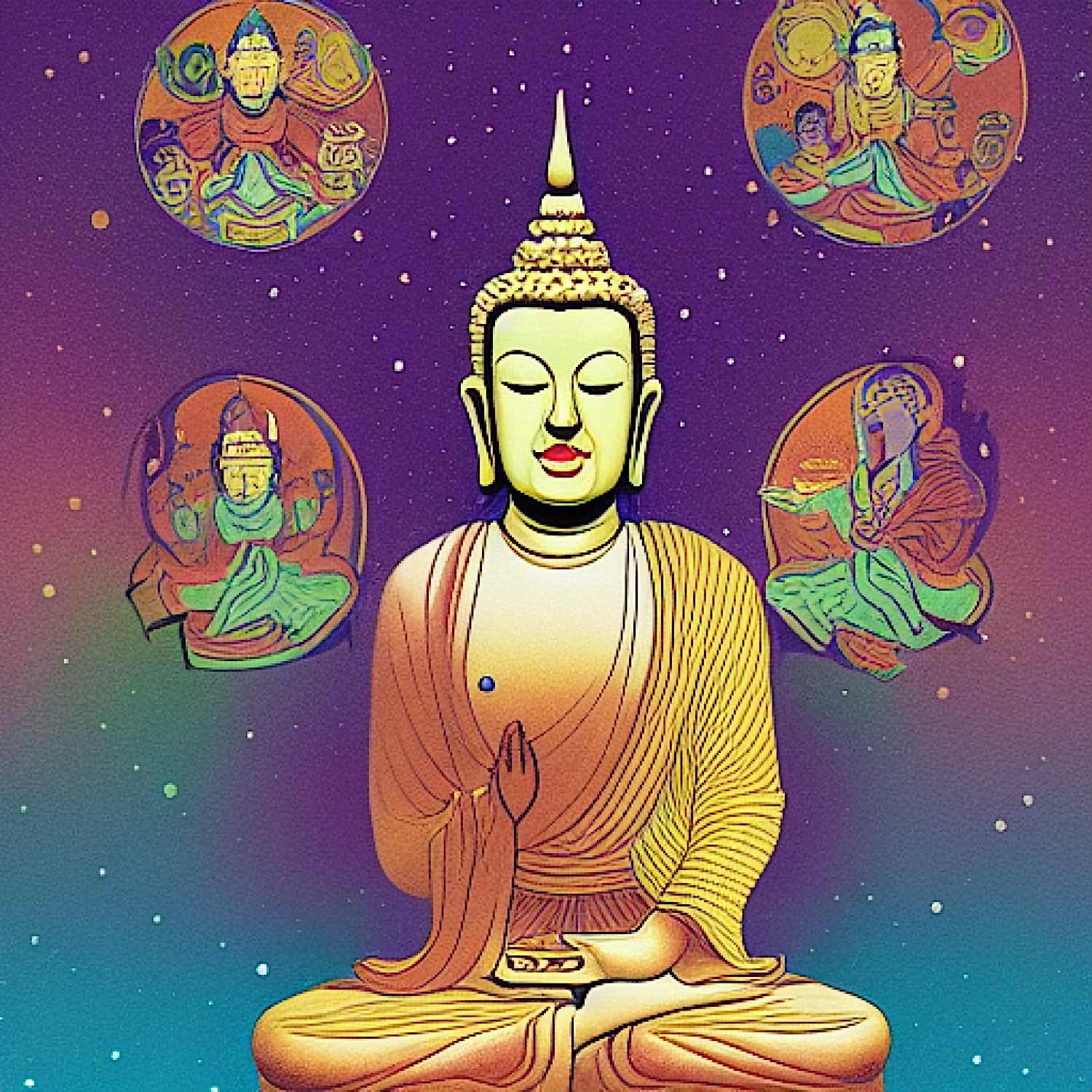 Since we know Buddha spoke of countless world systems and an endless stream of time (no beginning, no end) it is safe assumption that Buddhas manifested in other world systems.

In the Avatamsaka Sutra — often described as the Buddha’s highest teaching — the Buddha describes a vast and infinitely- interconnected cosmos that consists of an infinite number of buddha realms.

These buddha realms are not just parallel universes — they are also interconnected, with each realm containing an infinite number of other realms. Furthermore, each plane contains an infinite number of beings, and each being includes an endless number of buddha realms. In other words, everything is connected to everything else, and reality — as we think we perceive it — is ultimately beyond our current understanding.

So, with each plane “containing an infinite number of beings,” there is no question of the need for countless forms of Buddhas.

In the Flower Garland Sutra, Buddha teaches that there are unlimited universes, dimensions, and realities — and a Buddha in each one of them.

This is an excerpt from the Sutra:

In the Flower Garland Sutra, Buddha teaches that there are unlimited universes, dimensions, and realities — and a Buddha in each one of them. So, if we take the Buddha’s word for it, there are definitely alien Buddhas out there somewhere…

Cause and effect, birth and death — these things are all a part of the natural order of things — in every universe and world system. And, that applies to small beings like us as well as to gigantic things like universes. 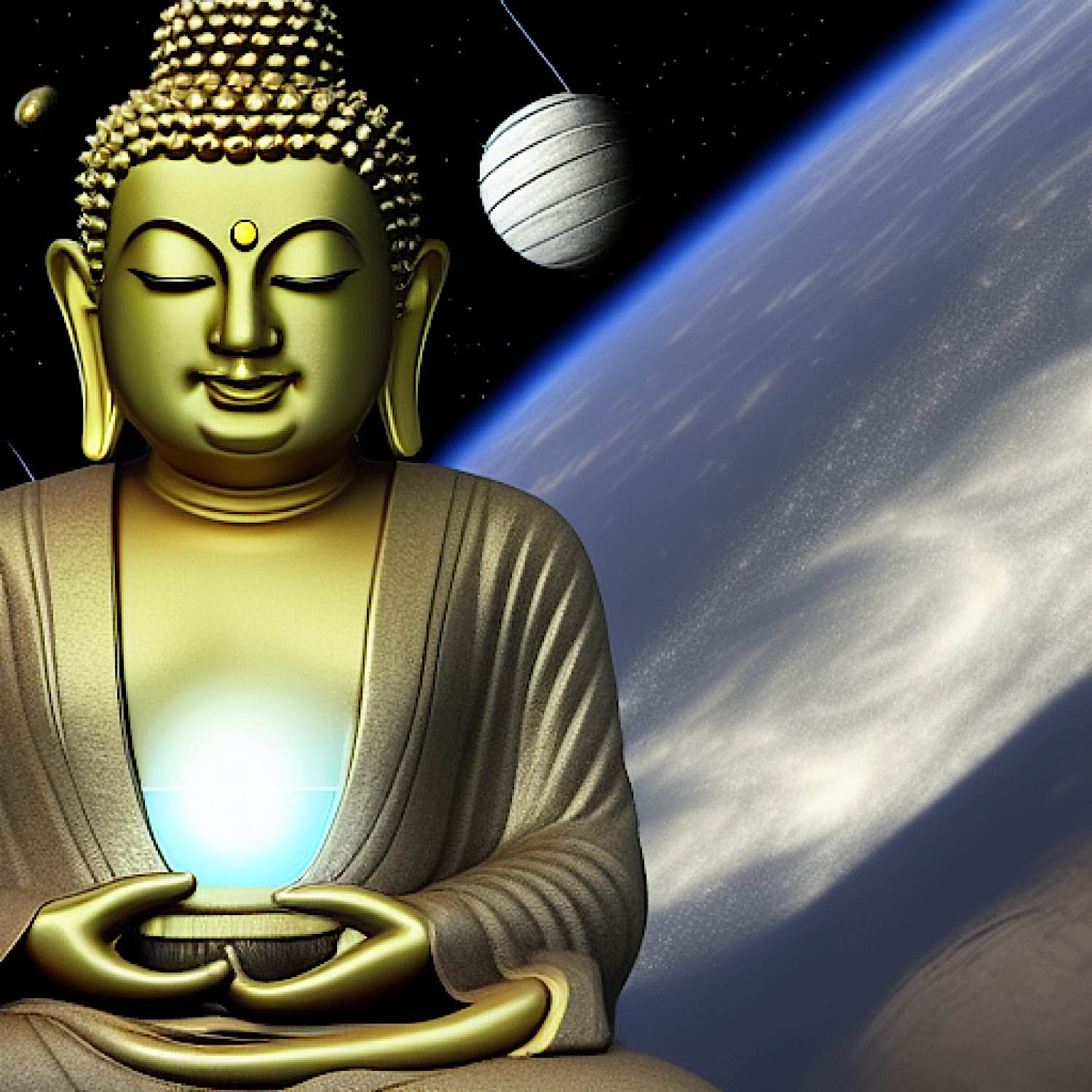 Again, we can only speculate on form — which is only important as a “skillful means.” But one thing is certain — he/she/it would use skillful means, he wouldn’t necessarily be a “he” and she/it would be compassionate and wise.

Most importantly, an alien Buddha would embody the mind of compassion and wisdom that knows no bounds and the enlightened activities which are spontaneously present to benefit all beings — including aliens from other parts of the cosmos (assuming they exist — by mathematical probability, they almost certainly do).

“Paul Davies, an astrophysicist at Arizona State University and chair of Seti’s post-detection taskforce, argues that alien brains, with their different architecture, would interpret information very differently from ours. What we think of as beautiful or friendly might come across as violent to them, or vice versa. “Lots of people think that because they would be so wise and knowledgeable, they would be peaceful,” adds Stewart. “I don’t think you can assume that. I don’t think you can put human views on to them; that’s a dangerous way of thinking. Aliens are alien..””[2]

If aliens are “alien” then it makes sense, from a Mahayana Buddhist point-of-view — where “all beings” must be rescued from suffering — that Buddha would manifest in a relatable form to the aliens.

In a feature in Popular Mechanics, the expert hypothesized:

“The size and shape of the alien would be determined by gravity, ambient density, and source of energy. Plant-like aliens are unlikely because photosynthesis doesn’t encourage complex survival strategies. The need to chase food favors mobile life. If such life evolved in a thick atmosphere, it’s likely to be a horizontal creature. A thinner atmosphere would favor the most vertical animals. Two legs and two arms are more efficient than four legs, so incorporating the rule of symmetry, it’s not unlikely that aliens would have evolved just like humans: bipedal and upright.

“When we consider that 95 percent of the universe is not perceptible by our senses or technology (dark matter and energy), then it’s most likely that’s where the aliens are. So one might say most aliens don’t look like anything because they are invisible.”[3]

There’s a “Buddha out there…”

So, if you’re ever feeling lost in the vastness of the cosmos, remember that there’s a Buddha out there — somewhere — who knows exactly what you’re going through and is ready and willing to help. To some extent, we already connect with this way of thinking. Many of us meditate on the Enlightened Buddha in a wrathful form, with a body like a Raksha (sort of a super-zombie) or a body with a hundred arms, or a sky-dancing Dakini. We can think of this as skillful meditation using visual symbols and metaphor — or as real emanations of Wisdom and Compassion in our relative universes.