Born out of the English and Scottish guild systems of the 13th century, the fraternal organization of Masons was designed to help stonemasons regulate the qualifications of guildsmen and find lodging when traveling town-to-town, constructing cathedrals and city walls.

Yet 800 years later, long after the Protestant Revolution, which halted the building of Catholic cathedrals in a newly-Protestant England, and the invention of the cannon, which rendered stone city walls a less useful defense, the Masonic insignia of a square and compass can still be found today: on rings, polo shirts, car decals and license plates.

Though gone are the days of stonemasonry as a popular profession, the fraternal organization of the Masons persists and, for a community of Jews around the world, it’s a touchstone of connection.

When the pandemic hit, Shlomo Bar-Ayal, an Orthodox Jew and former master at the James W. Husted-Fiat Lux Lodge in Manhattan, and Sean Rothberg, a Mason from the Richardson Masonic Lodge #1214 in Dallas created respective Facebook groups for Jewish Masons.

When they found out about the other’s groups, they joined forces to create a larger group of Jewish Masons, from New York, Pennsylvania, Ohio, Texas, even Australia, that now meets online weekly: a Zoom minyan of Masons.

The group, an ensemble of men of varying ages, many bespectacled or sipping a beer in front of Zoom greenscreen backgrounds, are truly, in a somewhat stereotypical sense, a brotherhood.

They kibbitz, frequently ganging up on Bar-Ayal, one of the group’s more seasoned members, cracking jokes about his age. Members frequently speak over each other, and conversation gets garbled in the video chat forum.

But the group also discusses Torah portions and connections between Masonry and Jewry and hosts lecturers on Jewish topics, such as the Holocaust.

This group of Jewish Masons, along with most every other Mason presently, are not guildsmen. Rather, the organization serves as a place for men to not only connect with a diverse community, but self-actualize — despite the wisecracking — and practice etiquette and respect for those different from them.

In addition to opening many Masonic hospitals in the 19th century, Masons are now known for giving charity to various organizations, such as these hospitals.

According to Dov Reidenberg, a fourth-generation Mason from Philadelphia, Masonic activities are tzedakah. Reidenberg’s lodge periodically spends time cleaning up and picking up trash at Har Nebo Cemetery and Monuments in Philadelphia.

To some outside of the Masonic community, however, the connection between Jewry and Masonry is more sinister. Among a cadre of conspiracy theories that the secrecy of Masonry has excited is the theory that Masons started the Holocaust. In reality, Adolf Hit-
ler suspected Masons of working under Jews and conspiring against the Nazi regime.

In the true good-spirited nature of these Masons, the group was quick to dismiss this theory, along with others — that Masons are devil-worshippers and are taking over the government.

“If Masons control the government and Jews control the economy, then why did I go to a community college and not straight to Harvard or Yale for free?” Rothberg said.

Judaism and Masonry are intertwined more deeply than just the number of Jews who happen to be Masons. According to Bar-Ayal, Jews have been a part of Masonry for about as long as Masonry has been around in the United States, since the 18th century.

Though the fraternity is seen to outsiders as enigmatic and exclusive, there are few rules to becoming a Mason: One must be a man, believe in a deity and join the brotherhood by his own free will. Therefore, Masonry did not preclude Jewish men from becoming Masons.

Reidenberg adds another requirement to becoming a Mason: “To be one, ask one.” To begin the initiation process, one must simply ask a Mason about joining the fraternity.

This simple directive is largely responsible for what Bar-Ayal calls “Jewish lodges,” meetings of Masons that are largely Jewish, yet a bit of a paradox, as lodge meetings bar any discussion of religion or politics in the space.

Growing membership through word of mouth, Jewish Masons tap synagogue acquaintances to join the Masonry and, in areas with large Jewish populations, Jewish membership of lodges such as Bar-Ayal’s and Reidenberg’s lodges snowballs.

Masonry’s domino-effect recruitment strategy still does not account for the dwindling number of Masons in the U.S. In the 1960s during the counterculture movement, Masonry was seen as “square,” according to Mark Stought, a Jewish Mason in Cleveland; it was an organization for parents or veterans looking for the comradery they once had with other soldiers during wartime. 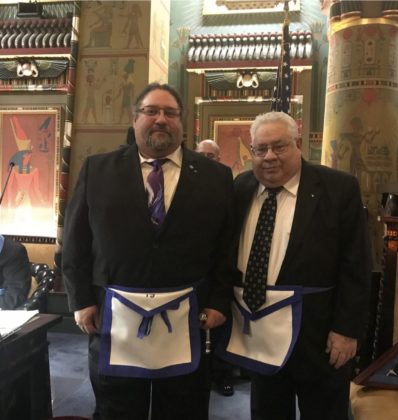 Now that many of these veterans are gone, Mason numbers are diminishing, and lodges are merging to keep membership numbers up.

Reidenberg has been married to his second wife for three years and said that his time as a Mason has helped him become a better husband. But Reidenberg doesn’t have any children, and he said that his family line of Masons will end with him.

Reidenberg became a Mason almost 30 years ago, largely to spend more time with his father, who has been a Mason for almost half a century.

“It’s a legacy that we want to pass down from one generation to the next,” Steven Reidenberg, Dov Reidenberg’s father, said.

When Dov Reidenberg joined his father’s lodge in 1994, which at that point was about 85-90% Jewish, he remembered doing something that made his grandfather laugh, a memory he still holds onto almost 30 years later.

“When he passed back in 1995, it was one of the things that I remembered about him, that I made him laugh in a lodge meeting,” Dov Reidenberg said.

Dov Reidenberg is hopeful that Masonry will continue to endure, even though he’s uncertain there will be a fifth generation of Reidenberg Masons.

Masonry doesn’t need to be trendy, as long as it continues to attract those who share the values of the centuries of men who came before them: “To be a Mason, you really want to be able to not only improve on yourself, but help change the world, to help change the community, help make the community and the world a better place.”