June 27, 2022: This Week I am Thankful For…”: heroic nurses who save babies, the long lives of our teachers and pigs at airports

More of the same last week: war, pandemics, violence. Fortunately, with a little digging, we can find some “good news” to celebrate the virtues of compassion and kindness in our world. Those little acts of Karuna (compassion) and Metta (loving-kindness) that help affirm we all have Buddha Nature!

This week we celebrate more karuna and metta: July 6 is the Dalai Lama’s birthday.

1. Two nurses save 35 newborn babies from a hospital fire!

2. The long lives of our precious teachers — may they live long to spread the precious Dharma. Coming birthdays in the next month include His Holiness the Dalai Lama, born July 6, Jack Kornfield July 16, and Venerable Zasep Rinpoche July 1.

4. 12-year-old Gabriel Clarkie raised $325,000 for Ukrainian kids by creating a donation lottery  — with the prize being his hand-made wooden bowl! 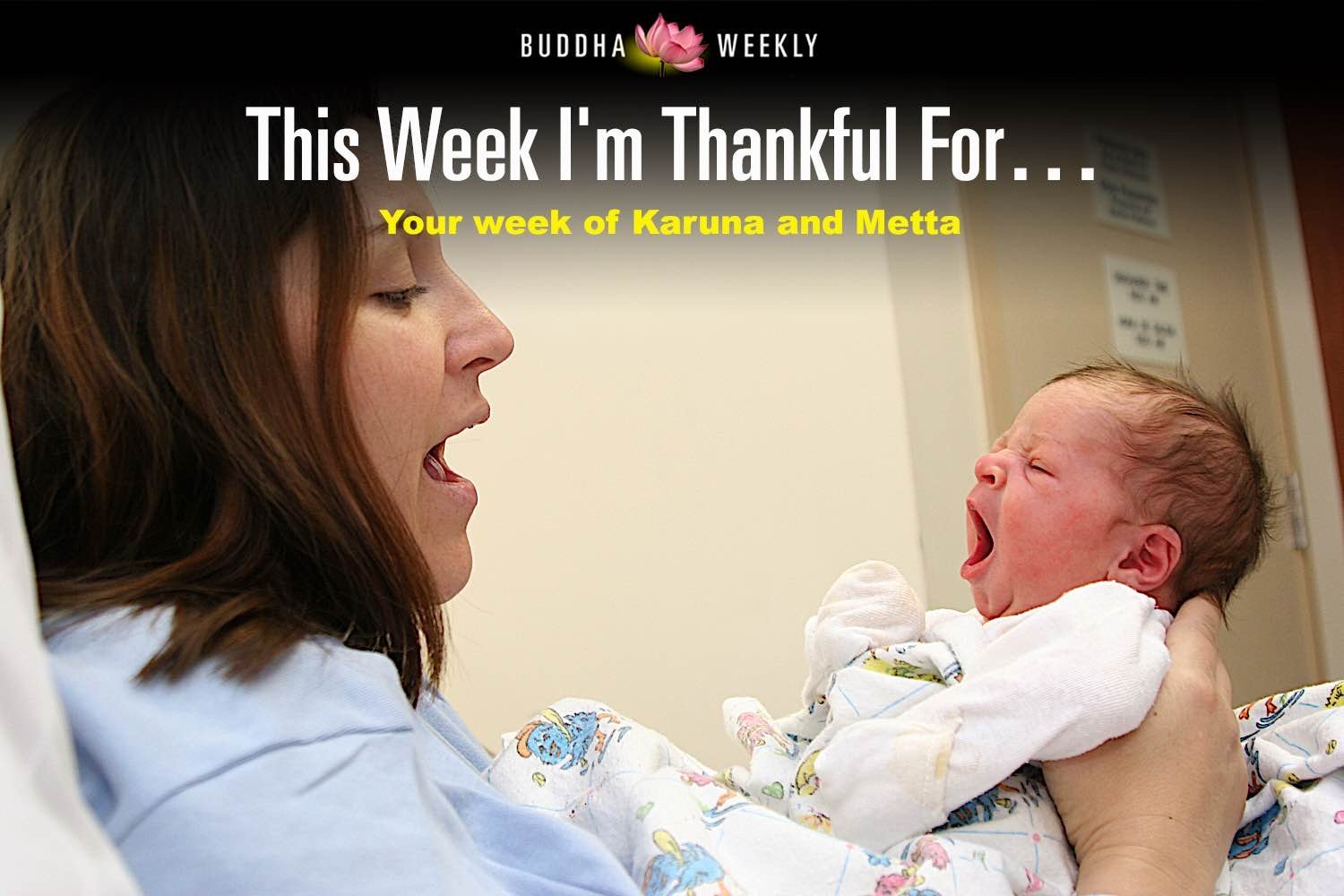 Two nurses saved 35 babies, including premature babies in incubators, from a raging fire in a hospital. Stock photo of mother and baby in a hospital; this is not the nurse or one of the babies involved.

Two nurses save 35 newborn babies from a hospital fire in the Philippines!

It could have been a tragedy and made big news on CNN. Instead, it became a good news story, a heroic story of two nurses who made multiple trips through a raging fire to save their tiny newborn baby charges. As reported in Readers Digest Canada:

“Kathrina Bianca Macababbad was bathing one of the unit’s babies just after midnight when she heard that a fire had broken out on the floor below. As the flames raged, she and fellow nurse Jomar Mallari made multiple trips in and out of the building with their charges. The biggest challenge was rescuing premature babies who were intubated and dependent on ventilators to breathe. Holding the babies in one arm while manually ventilating them with the other hand, the nurses managed to get all 35 of their tiny patients to safety. —By Flannery Dean” [4]

July 6 is the Dalai Lama’s birthday.

The long lives of our precious teachers

On July 6 we celebrate the 87th birthday of His Holiness the Dalai Lama. Noted teacher Jack Kornfield’s birthday is on July 16, and the most Venerable Zasep Rinpoche celebrates on Canada Day! Happy Birthday to our precious teachers and may they all enjoy good health and long life and teach the Dharma for many years to come! 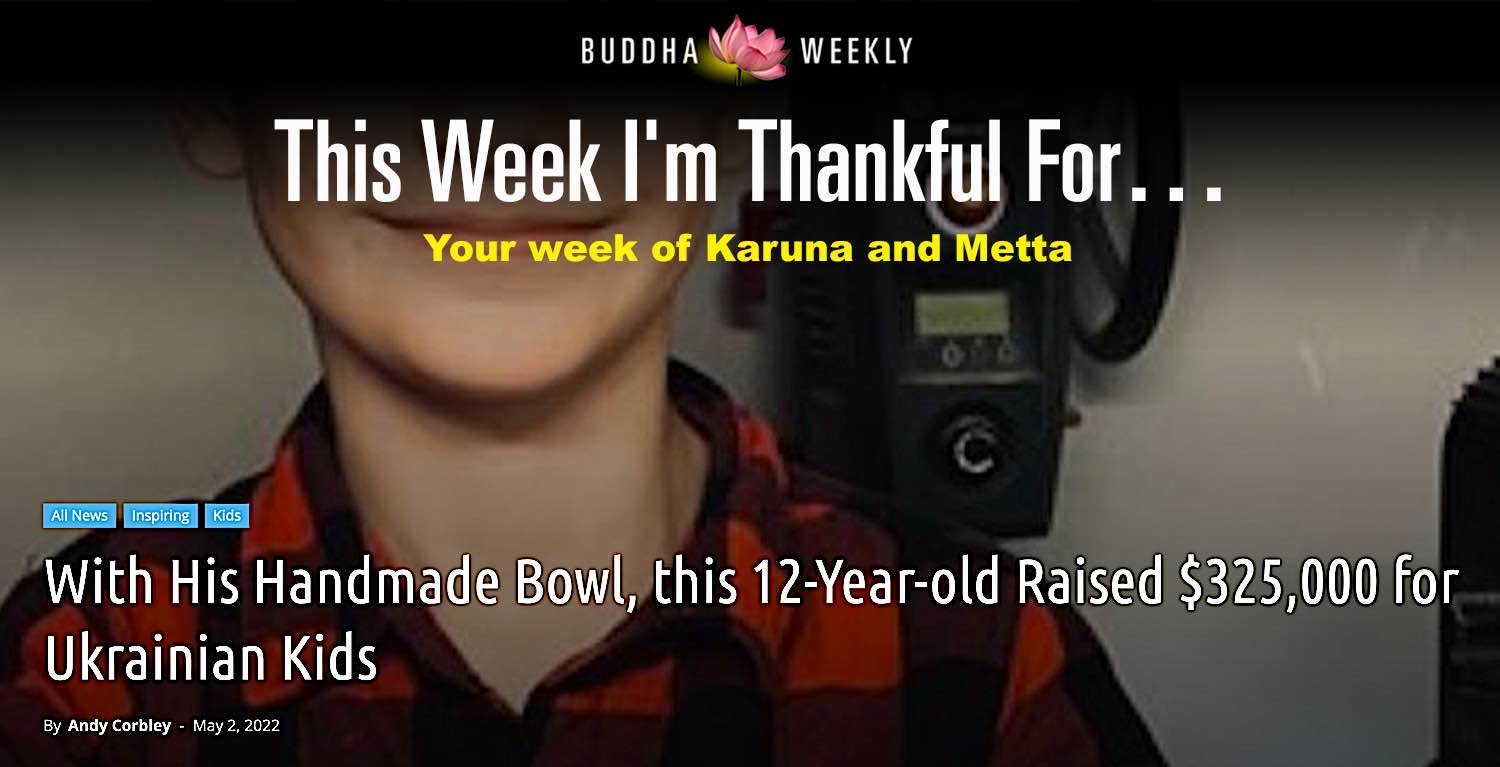 12-year-old Gabriel Clarkie raised $325,000 for Ukrainian kids by making and selling his wooden bowls. We’re thankful for Gabriel Clarkie and the many people who supported his mission through the magic of social media buzz.

According to Goodnews Network:

“After a young boy’s woodworking project went viral, he seized on his new internet following to raise money—not for himself—but for the children of Ukraine.

The power of a viral social media post never ceases to astound. When Gabriel Clarkie’s proud dad tweeted a link to his son’s hobby, carving wooden bowls and posting them for sale on Instagram, it went viral—and his Insta followers jumped from 6 to 227,000 in just 48 hours.” [1] 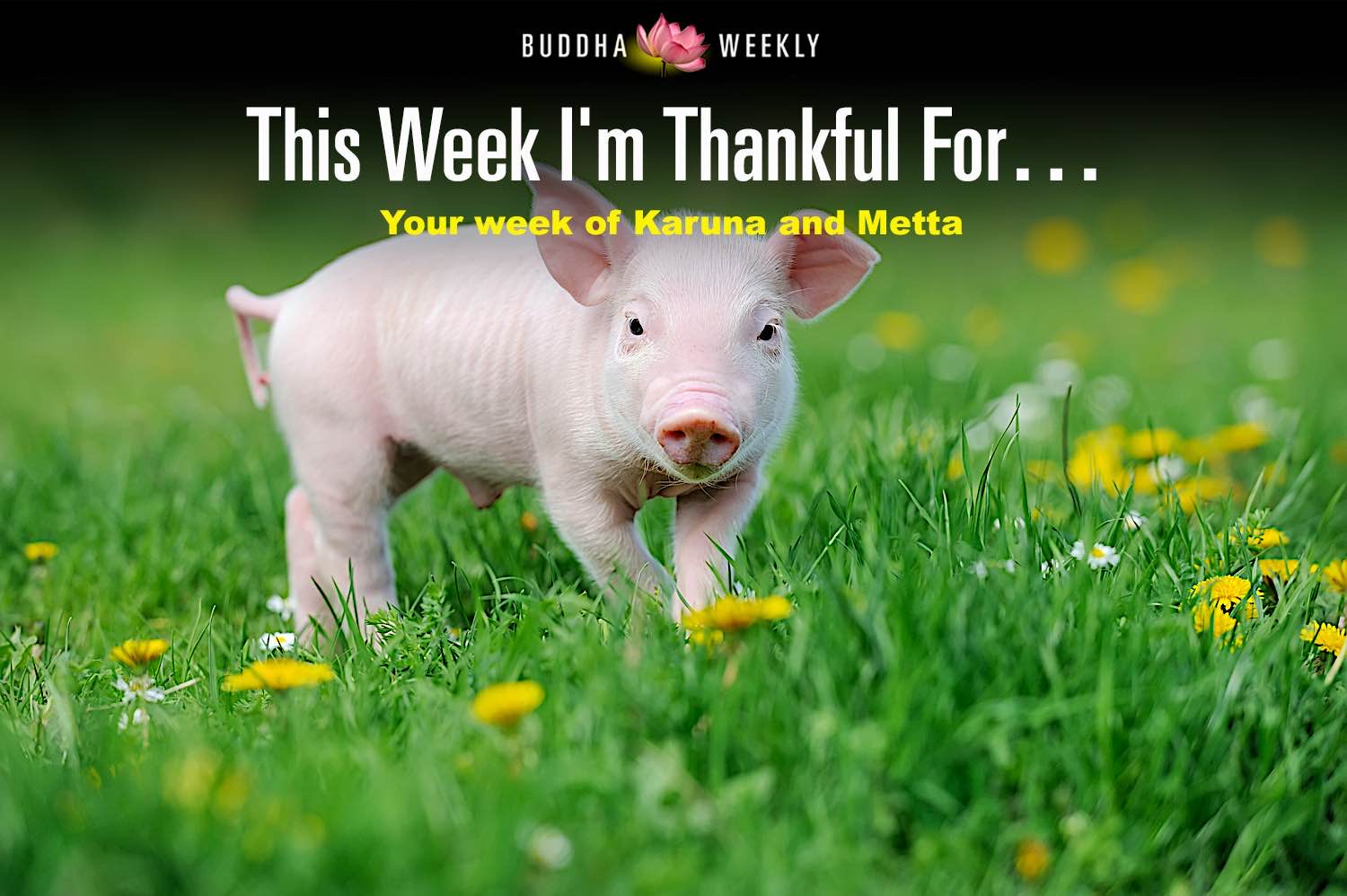 20 pigs helped save 150 or more geese and airline passengers from collisions at an airport in the Netherlands.

Airport pigs save the geese and keep the skies safe!

In a pilot program, the Netherlands has found that 20 pigs — left to roam, and well fed — can save the geese at airports, possibly preventing damage and accidents. The pigs are well paid — all they can eat — and eat the plant life that normally appeals to the geese.

Geese strikes remain a major problem at airports around the world. There were 150 bird strikes in the test site at New Amsterdam’s Schiphol Airport prior to the arrival of the 20 hungry pigs. Now our chubby friends have dropped the strike rate to zero! All life is precious — and the pigs have a good life munching away. [3] 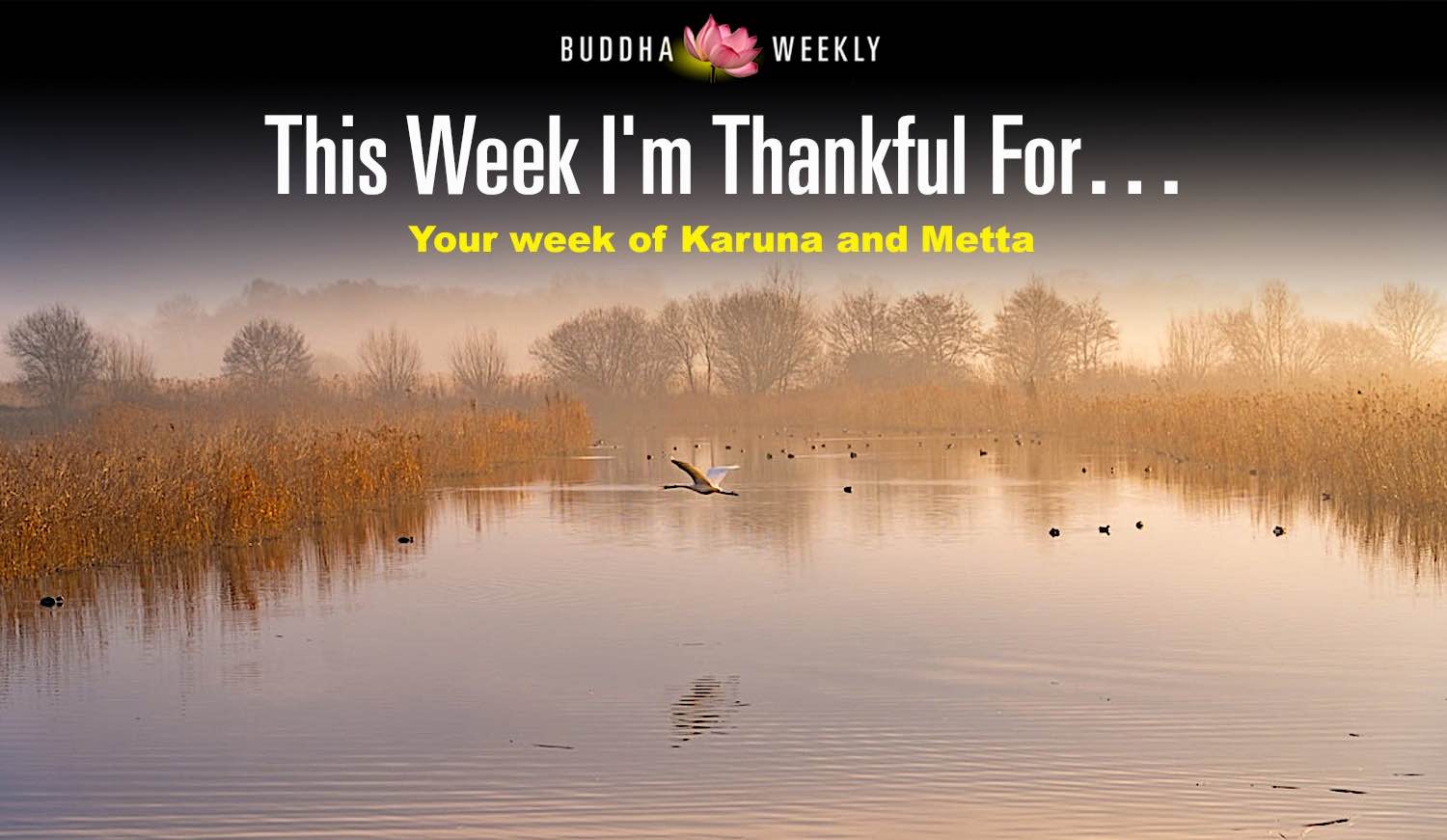 Britain is creating the first “super preserve” of wetlands.

In a move to preserve 15,000 acres of Somerset Wetlands as a natural reserve, the U.K. is moving to prevent the release of 11 million tonnes of carbon in the form of peat.

Wetlands are vital, especially now with global warming and environmental disasters around the world. According to Christian Dunn at Bangor university, “Wetlands are the superheroes of the natural world.” It’s not just about wildlife, clean water, and nature. It’s about world-changing quantities of carbon.

U.K.’s “bogs” are as vital to climate preservation as the largest jungles or forests. According to “Positive News” reporting on the story:

“In this case, the new super reserve will encompass existing reserves on Somerset’s levels and moors, a region of coastal plains, fens, reedbeds and saltmarshes, which make up the heart of the county.

These areas are estimated to contain around 11 million tonnes of carbon, in the form of peat: semi-decomposed dead plant material. When peatlands dry out – perhaps because they are drained to make farmland or when peat is extracted for compost – the vegetation decomposes a lot faster, releasing carbon into the atmosphere.”  [2]

This Week I’m Thankful For

Please let us know your good news. Each week our editors will try to report on and summarize the “good news” from around the world — not just Buddha Dharma news, but any inspiring stories of Karuna (Compassion) and Metta (Loving Kindness) — because we all need to know there’s more than bad news in today’s world. What’s your good news? What are you thankful for?
NOTE: Please use this for inspiring good news — not usually for reporting on Dharma news, with the except of major events (such as Saga Dawa). If you’d like to promote events, especially Dharma events, please use our contact form to minimize confusion. Thank you.