Krampus is the evil counterpart of St. Nicholas. Whereas jolly St. Nick brings well-behaved children gifts, Krampus carries naughty children off in a basket slung over his shoulder and takes them back to his lair.

The myth of Krampus is Germanic in origin, but other countries – such as Austria, southern Bavaria, Hungary, Slovenia and Croatia – have similar legends. The Krampus is generally a goat-like demonic entity with long horns, cloven hooves, and yellow eyes. Young men in the aforementioned countries dress like the Krampus, frightening small children.

In Europe, the feast of St. Nicholas is celebrated on the 6th of December. The evening preceding is called Krampusnacht, the night that the Krampus is said to materialize and punish naughty children. (In his more benign modern version, the Krampus punishes bad girls and boys with gifts of coal and ruten – bundles of birch used to swat disobedient children.) The evening might also be celebrated with a Krampuslaufen, an alcohol-fueled run through the streets in which participants dress as the Krampus or his female pagan counterpart, the perchten. 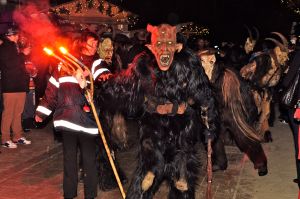 Krampuskarten are greeting cards depicting the Krampus looming over naughty children (or “punishing” salacious women). Printed since the 1800’s, the earlier versions depict a more frightening and lewd beast; modern versions are much more charitable of his image. These illustrations are generally accompanied with humorous or raunchy slogans.

KRAMPUS THROUGH THE AGES

2000 BCE Enkidu appears in the Epic of Gilgamesh, the earliest known appearance of a ‘Wild Man’ in literature.

600 BCE In the book of Daniel in the Old Testament, King Nebuchadnezzar is punished by God for his pride when he is turned into a hairy beast.

217 BCE Saturnalia is introduced as a winter celebration in Rome, marked by gift giving, wild parties, and a reversal of the normal social roles of slave and master.

4th Century CEDue to Roman influence, many Germanic tribes, such as the Goths and Vandals, convert to Christianity; their pagan traditions survive in small villages in the Alps where the Church cannot penetrate.

1250 CE King’s Mirror, a Norwegian text, features a Wild Man character who is described as being covered in hair.

Early 19th Century CE Germanic and Dutch immigrants to the US popularize ‘Pelznickel’ traditions in Pennsylvania, Maryland, and as far west as Indiana.

2004 CE Blab! Magazine curator Monte Beauchamp publishes Devil In Design, a collection of vintage Krampus postcards from the turn of the 19th century. This book marks an increase in Krampus’ popularity in the English speaking world.

2009 CE American satirist Stephen Colbert is visited by Krampus on his television show The Colbert Report.