“There are innumerable universes besides this one, and although they are unlimitedly large, they move about like atoms in You. Therefore You are called limitless.” 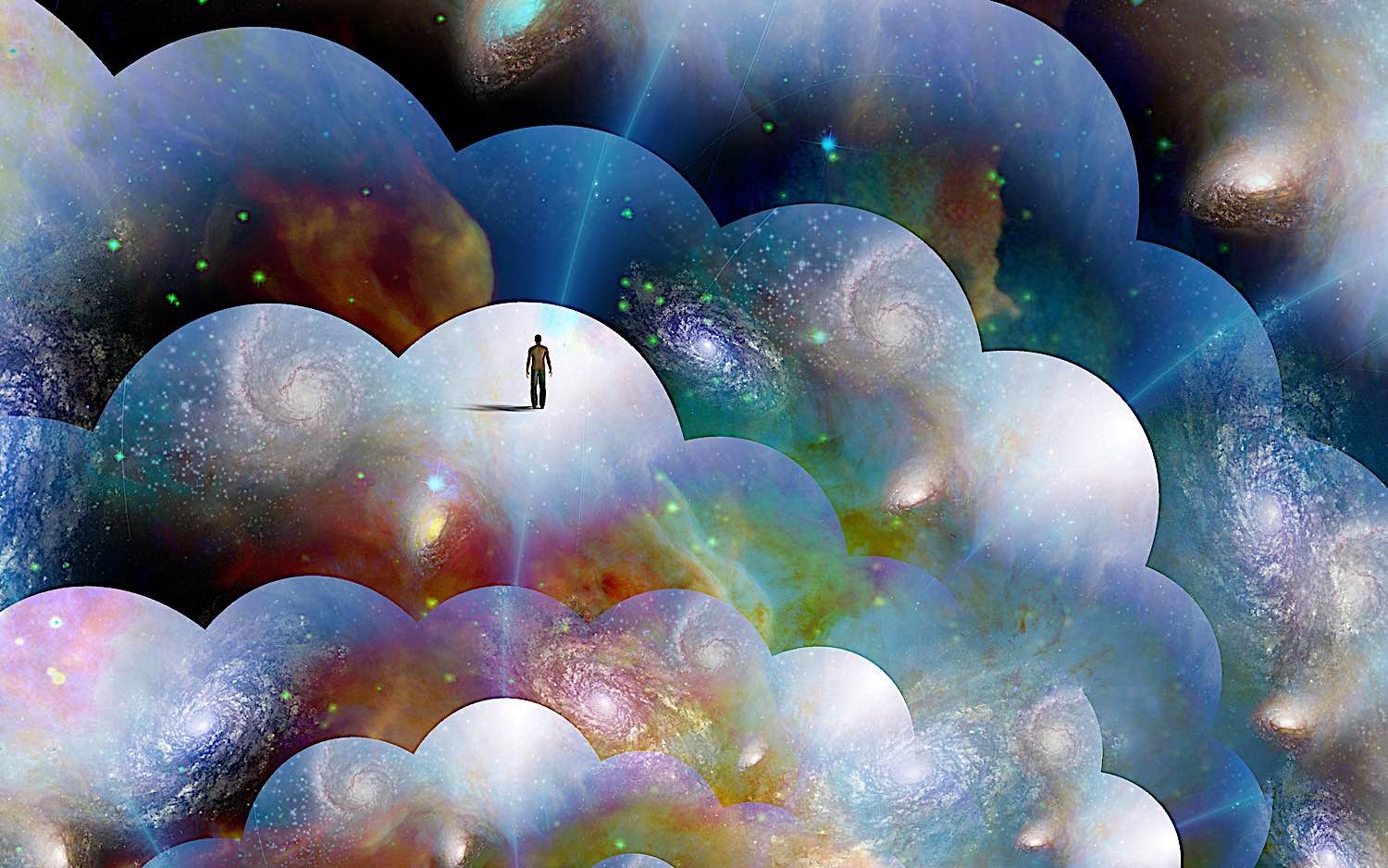 This profound observation is a translation of the Sanskrit — and is a universal concept in most philosophical religions such as Buddhism, Hinduism and Daoism:

In Buddhism the most important “understanding” (in quotes, because most of us don’t really understand it) is Tathata. This can be variously translated into English as “Is-ness” — or Thusness, Suchness, As-it-is-ness, and many other “nesses.” Many of these concepts are the domain of advanced meditations, such as Dzogchen and Mahamudra — but they are also quite engagingly described in several sutras (some quoted below.) 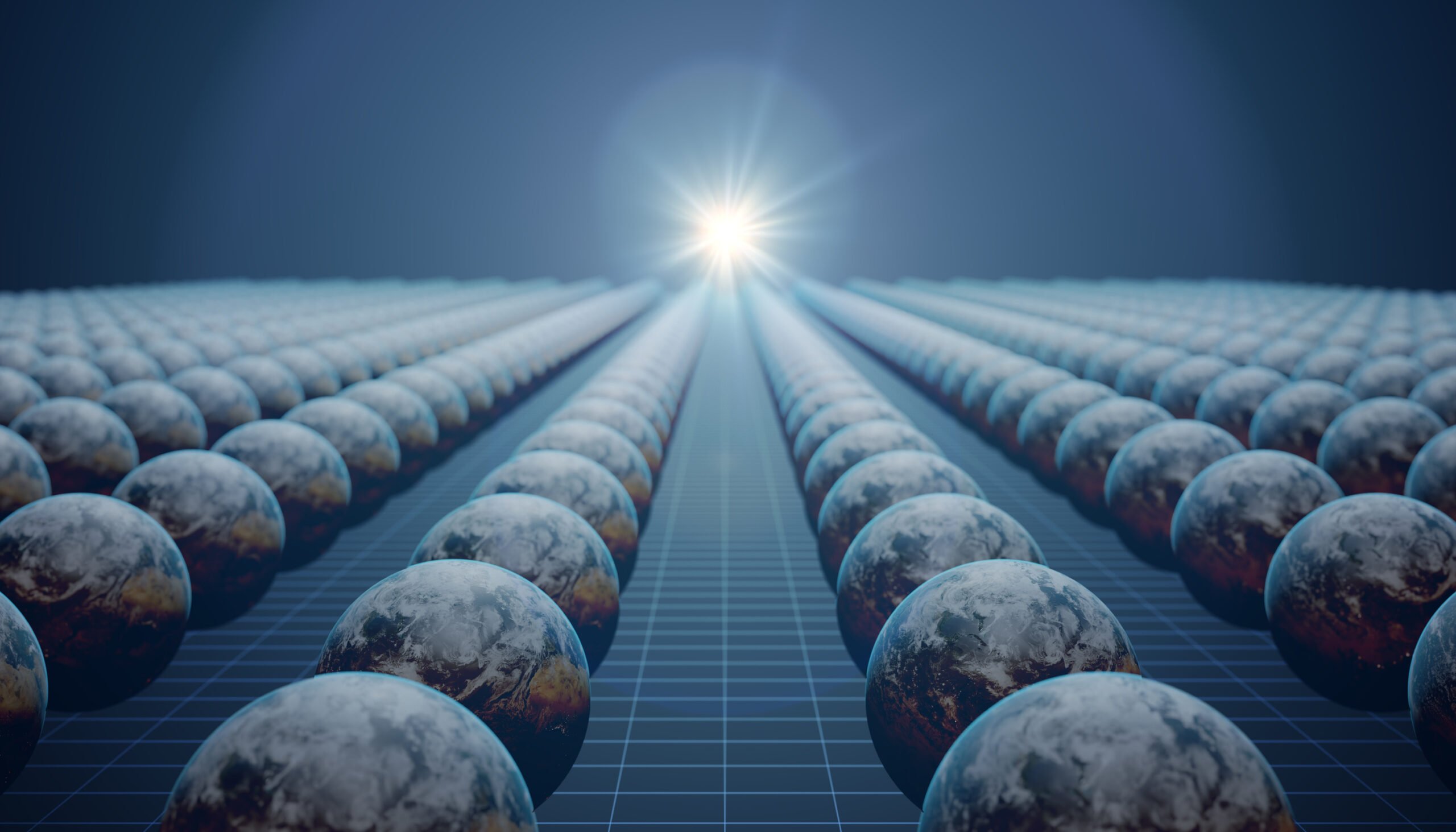 No Creator Deity in Buddhism because….

One reason Buddhism has no concept of a creator deity is the core belief in ultimate reality — the multiverse — which is timeless with no beginning and no end, and no limits. There can be no creator if there was never a beginning (i.e. nothing to create!) This has nothing to do with God, gods, faith, or karma

For similar reasons, a core belief in most lineages of Buddhism is the belief that our mind as eternal. Since time is cyclical, and there as many “yous” as there are universes, there can never be an end to mind. ‘You-ness’ — or grasping at ego — which is one of the methods by which we achieve Enlightenment — does not mean an end to the mind. An end to “this life” does not mean an end to the “you” that is connected eternally to the vastness of “Is-ness.”

Confusing concepts, perhaps, but the concept of multiple universes and multiple yous is fairly well accepted in many philosophical spiritual paths such as Buddhism. It doesn’t require faith. Today, Quantum physicists are starting to mathematically formulate similar concepts. It is neither magical, nor imagination, nor faith-based to accept the basic concept of “is-ness” and the multiverse.

This isn’t the wishful ramblings of an imaginative Buddhist editor. These points — and many more — have been well elaborated in many sutras, and most notably the Flower-Garland Sutra (Avatamsaka Sutra) which lands at a massive 1600 pages in English translation! (Some interesting quotes below — and more to come in our in-depth “multiverse” series, staring next week!)

Is-ness is not eternalism

Is-ness is not eternalism — or any other ism — since the whole point “Is-ness” is about removing the “I” from our concept of reality. “I” like “time” are artificial imputations — as it is stated by Buddha — that distort the true comprehension of “is-ness.” Is-n’t that great?

In Mahayana, the great sages, and the Buddhas, explore this vast “bigger than multiverse” concept in apparently fanciful Sutras such as the Flower Garland Sutra. Literally, Flower Garland is the multiverse. Long before there was an understanding of “Quantum Mechanics” there was “Is-ness.” 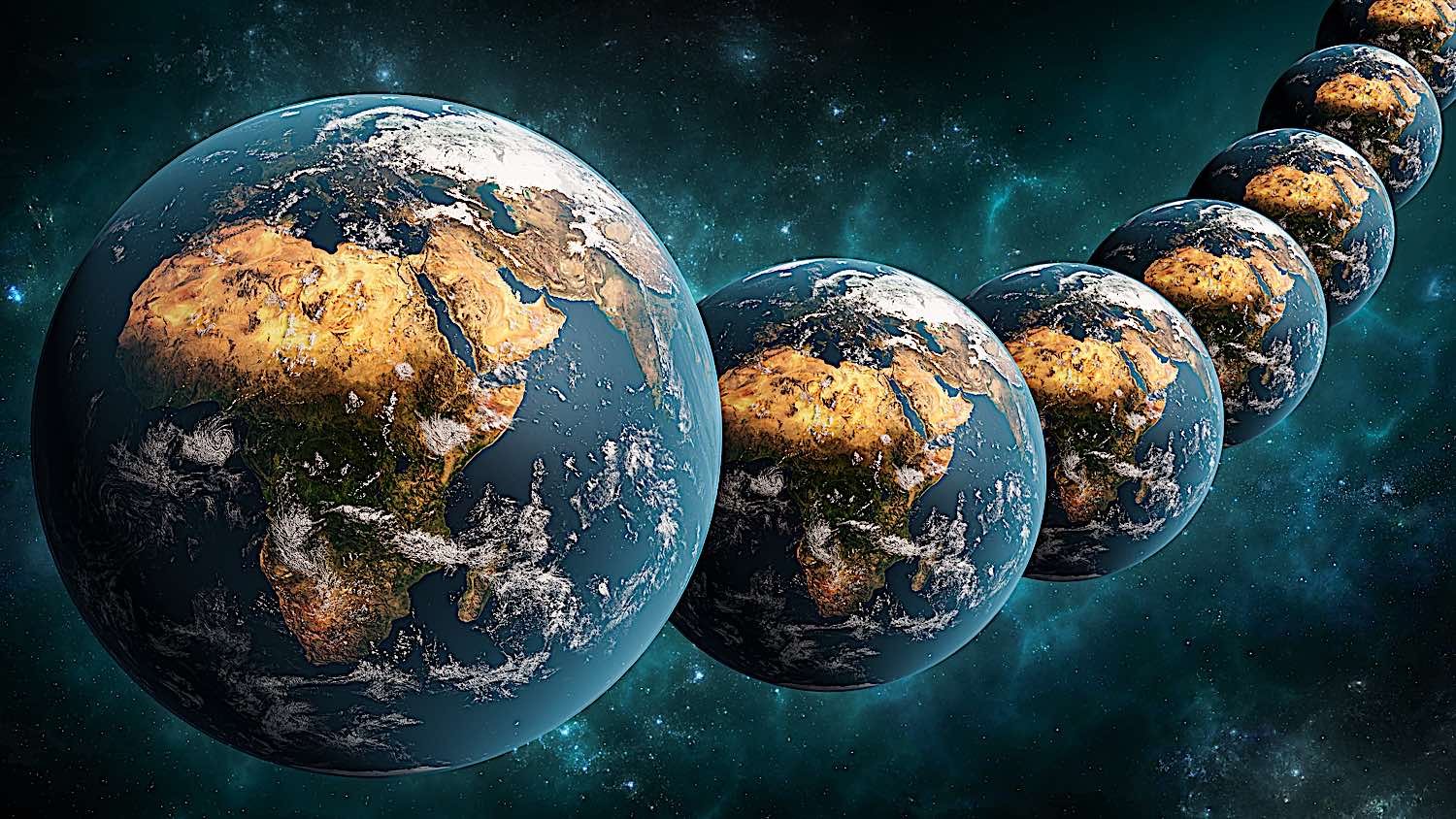 In Vajrayana, this exploration becomes experiential. Instead of reading about it in the Sutras, Tantrikas and Vajrayana Buddhists become explorers. First, we break down the barriers of “I-ness” so that we can see the true nature of “Is-ness.”

In sadhanas, when we say “Om Svabhava Shudo Sarva Dharma Svabhava Shuddho Ham…” we signal to our minds that we are dissolving our egos — allowing our consciousness to join the Oneness of everything.

The main purpose of Vajrayana sadhanas is to help us understand that what we perceive as reality is nothing more than an imputation of our ego-mind.

Advanced Vajrayana practices allow us to glimpse the ultimate reality without the imputations. Even more interesting, we earn how to construct new perceived realities — visualizing ourselves as deities in exotic mandalas — only to break them back down to blissful emptiness once again. What fun! 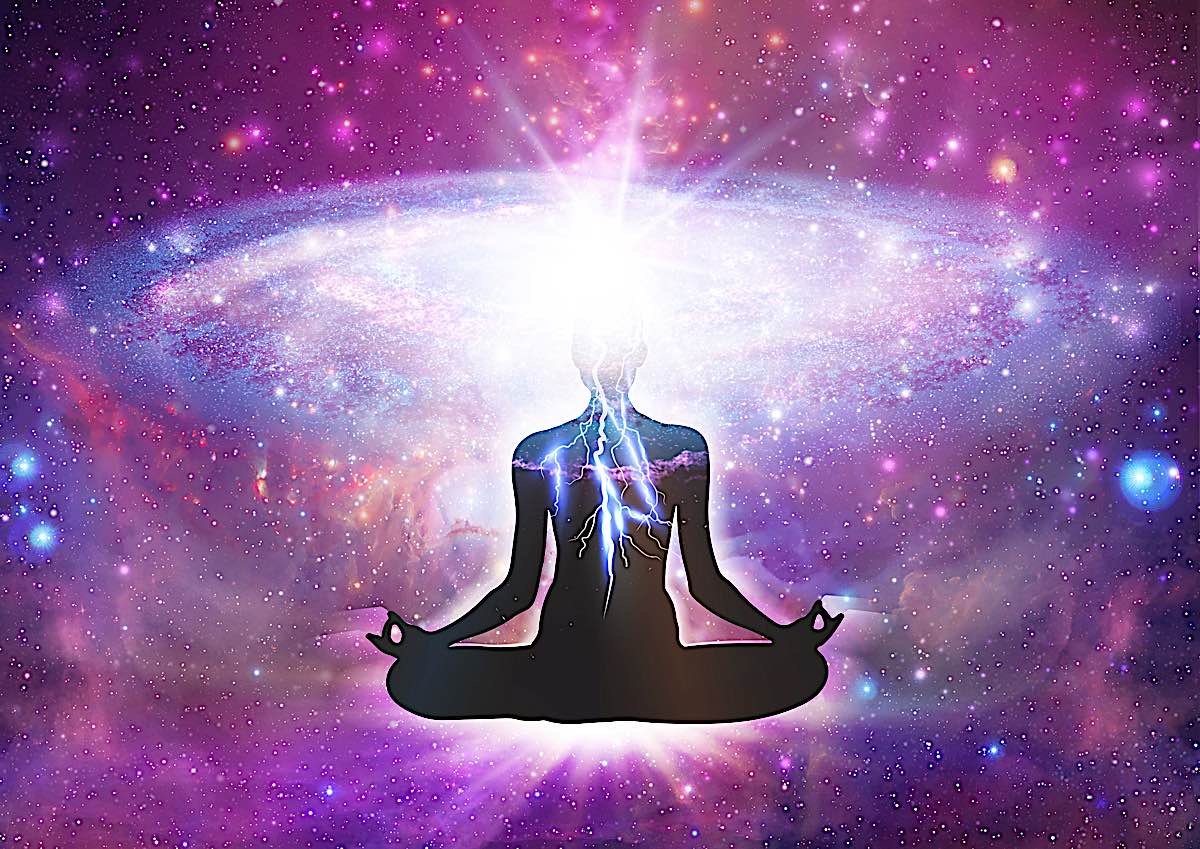 When we approach as a Dzogchen or Mahamudra meditator, we just simply abide in “is.”

When you ask a Buddhist teacher a question about the nature of reality, you will often just get the enigmatic answer, “because it Is.”

Or, because of “Is-ness.” No attempt at defining “Is.” Is — just is. There is no reason or need to try to define it.

Similar concepts are conveyed in Zen and Chan Buddhism through koans — riddles that “break the mind.”

In Mahayana Sutra practices, we have wondrous universes described by the Buddha in the Flower Garland Sutra and others.

All of these point to “is-ness” or “thus-ness.”

No barriers on is-ness

You also cannot place scope or barriers on “Is-ness.” It is ultimate. It is both the vast, unlimited multiverse — free of the constraints of time and dimension — and the concept of circular time, or even — no time. Time, being relative, and all.

If this doesn’t make any sense, you’re not alone. Buddhist philosophers, including many of the great sages, explore this “Is-ness” without necessarily understanding it. In fact, you could say, understanding it — is Enlightenment. Once the mind transcends barriers of “what you think it is” and explores “what else it could be” it starts to widen to the ultimate concept of — there is no understanding. There only “is.”

Avatamsaka Sutra — the mind, and the Multiverse

In the Avatamsaka Sutra, the unlimited nature of the mind is described:

“Endless action arises from the mind; from action arises the multifarious world. Having understood that the world’s true nature is mind, you display bodies of your own in harmony with the world. Having realized that this world is like a dream, and that all Buddhas are like mere reflections, that all principles [dharma] are like an echo, you move unimpeded in the world.”

The Avataṃsaka Sūtra describes a cosmos of infinite realms upon realms, mutually containing one another. Known in Chinese as Hua-yen and in Japanese as Kegon-kyo, the Avatamsaka Sutra, or Flower Ornament Scripture, is held in the highest regard and studied by Buddhists of all traditions.

In all atoms of all lands

Buddha enters, each and every one,

Such is the way of Vairocana….

The techniques of the Buddhas are inconceivable,

All appearing in accord with beings’ minds….

In each atom the Buddhas of all times

Appear, according to inclinations;

While their essential nature neither comes nor goes,

By their vow power they pervade the worlds.

Vast and yet so close

It is in the Avatamsaka Sutra that the notion of “vast yet so close” is taught. While on one hand, the sutra describes a vast, unlimited multiverse filled with countless wonders, beings, and Buddhas, on the other hand we discover just how close we are to all of the worlds and Buddhas. In Avatamsaka Sutra Chap. 51, Book 37-2 we find one of the most famous Buddhist quotes:

“There is not a single sentient being who is not fully endowed with the knowledge and wisdom of Buddhas; it is just that because of deluded notions, erroneous thinking, and attachments, they are unable to realize it. If they would eradicate deluded notions, then universal knowledge, spontaneous knowledge, and unobstructed knowledge would become manifest.”

At the same time, in book 2, we also learn that the Buddha teaches beings in “every place” in this vast multiverse:

“In the ocean of sentient beings The buddha-body appears like a reflection; According to the differences in their understandings Thus do they see the Guide. . . . Buddha, with each of his bodies, Teaches in every place, Pervading the whole cosmos, Beyond the reach of thought.”

Thus, the Buddha is not only close to us — he is within us. We are all Buddhas, it is just that we have yet to realize it.

The Avatamsaka Sutra is also known as the Flower Garland Sutra because of its teaching that everything in the universe is interconnected, like the flowers in a garland. In this sense, there is no “one” flower that can be considered separate from the others. Each flower contains the whole garland and each sentient being contains the whole universe.

This interconnection also extends to time, with the past, present, and future existing simultaneously. Thus, every moment is an eternity and every place is both here and there. In the Avatamsaka Sutra, we find the following quote:

“In a single instant, in a single place, You see all things in their entirety; Past, present, and future You know as one.”

The sutra also teaches that everything is connected not just in space, but also in time. The past, present, and future exist simultaneously and every moment is an eternity. Thus, we can say that the Avatamsaka Sutra is the ultimate Buddhist scripture because it contains the teachings of Thusness, which is the heart of Buddhism. 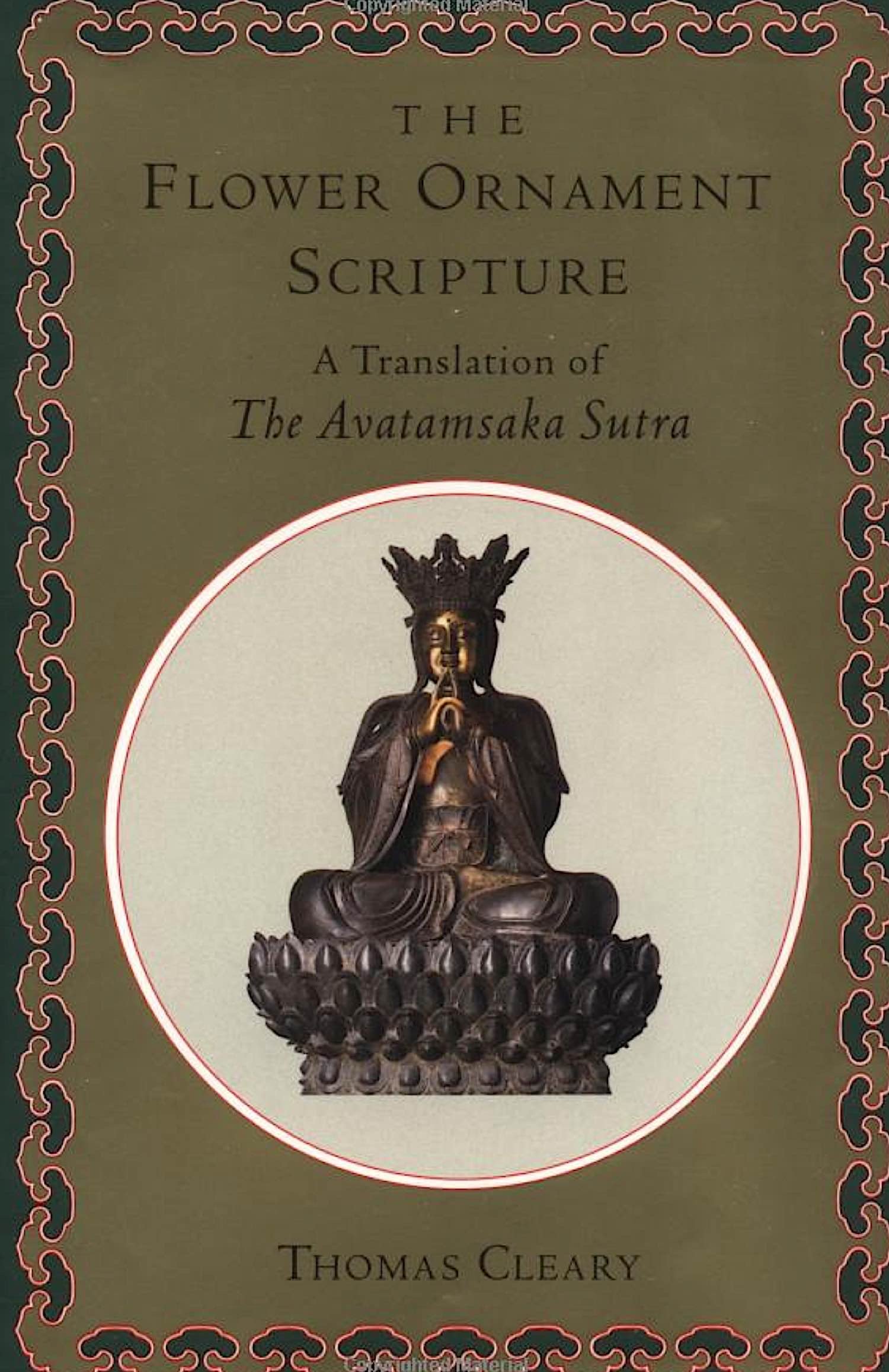 This is just a “rambling” editor’s introduction to our Buddha Weekly series on the multiverse. Several writers/contributers are writing on this topic for future weekly features.