Lucifer, Lilith and Cain – the Unholy Trinity of Luciferianism 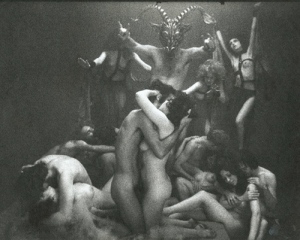 The God of Luciferian Witchcraft is Seth-an, or Set (the same as Samael, Satan). This is the Egyptian Prince of Darkness, a Lord of Chaos and sorcerous power. Set should not be considered merely a God in an anthropomorphic sense, rather a deific force which is the very essence of our being. When Azazel or Lucifer brought to Cain the Black Flame of Consciousness, this was as too Set’s gift to mankind. By working in the circles of Luciferian Craft, you are merely fulfilling your ancient heritage. While some choose paths less dangerous than this; the reality of witchcraft as a Luciferian Gnosis cannot be denied. The Great Work in reference to Set is for the magician to seek divinity, that is awareness, individuality and personal power. By believing in yourself rather than something ‘higher’ than you (The only Higher Angelick or Demonic being is YOU, the Luciferic Angel or Holy Guardian Angel) you become as your models.

Within the Black Tradition the Luciferian Trinity which is composed of Samael – Lilith – Cain hold significance in the model of practice within the cult. This Trinity is an alchemical process of becoming in which the magician aligns and utilizes the deific associations of Samael – Lilith – Cain to transform their consciousness into the divine essence which is Baphomet, the Head of Knowledge. To described Samael, a small section as follows is from LIBER HVHI, a ritual work which defines the deeper and darker practice of the Left Hand Path in terms of Witchcraft.

“It is written in the Bible that Samael/Satan fell from heaven as lightening, being a flash downwards, who before the fall, was a guarding Seraph around the throne of God. After his fall he was a master of death, the very poison of God yet he was also a Giver of Life, being the father between fallen angel and woman. In later Jewish writings, Samael is associated with the name Malkira, which Morris Jastrow Jr. associated with Malik-Ra, being “The Evil Angel” and the name Matanbuchus, being a form of Angro-Mainyush or Ahriman. Here does the circle become closed and the nature of the First Angel become perceived or sensed. In ongoing ritual work, the magician begins identifying his or herself with Samael (and Lilith) within the parameters of their own life and initiation.

The Lord of the Earth, being a name ascribed to Samael (Satan) and his fallen angels and demons, are but considered astral spirits, that which no longer take physical form, but may become manifest through the magician or witch who may make a “pact” with them, being initiation and dedication to the Left Hand Path. Samael is the patron spirit of the Left Hand Path, as his Word is what formed our thoughts and gave us the inner fire of the Black Flame, our individual process of thought and free will. The magicians who aligned their will with the Left Way, that of Samael (the Devil), were given powers over the earth in one way or another; all the while strengthening, defining and expanding their conscious. In Exodus 7 the magicians were able to make frogs and serpents by the power they obtained in the Devil, thus such creatures are astral forms of Ahriman (Samael) and the dreaming body of witches and sorcerers.” – Liber HVHI

Here we can see that Samael or Satan/Shaitan, is not the all devouring aspect, but also the savior of humanity and the original planter of the seed of light in our being. Through Cain did his lineage survive and continue on spiritually to this present time.

Lilith, being the Bride of the Devil, is one part of the Adversary as being the dark instinctual side of man and woman, feminine, yet horrific and loving all within the same breath. Lilith is known by the Semitic “Layil” which a word is meaning Night, but also the name of the demon of the storm. Lilith is associated with the screech owl and other beasts of the wild, as it is where she went after she left heaven to wander the earth. She is considered one of the Three Assyrian demons being Ardat Lilit, Lilit and Lilu, but rather these may be just variations of her name. It is suggested by some Hebrew scholars that Lilith was worshipped by exiled Jews from Babylon as a goddess of the wilderness.

Lilith as described in post-biblical literature is viewed as the Queen of Demons, she went to the caves near the Red Sea and copulated with fallen angels to beget other demons, she also taught (according to Manichaean lore – Az) the fallen angels how to form bodies and have sexual relations to give life to other ‘dragon children’. She was said to have been the reunited with her mate Samael (Ahriman) after the fall, when he would not be roused by his fellow fallen ones and demons, only the words of Az (Lilith) could rouse him. He then kissed her form and caused menstruation, which was passed on to all women as Lilith is directly connected with their fiery and dark sides.

The Goddess of Luciferian Witchcraft is Lilith or Babalon, as described previously. She is also Hecate, the Darkened Moon Goddess of the Cunning Circle, whose blessing is both youth, imagination and death. The Son is within you and that is Cain, the Baphometic Daemon whose magick is the core essence of the religion of sorcery. The very circle casting rite as written by Gerald Gardner presents the Mother of Witchcraft, “Mother, Darksome and Divine, Mine the Scourge and Mine the Kiss, The Five-point Star of Love and Bliss”. Within the circle there is the very Graal of the Adversary, that through Self-Love can the essence of the Pentagram be sensed and understood. He refers to Hecate or Lilith (via Diana) as being “Hell’s dark mistress, Heaven’s Queen.” This is the dual nature of the Devil and his Bride, the Adversary. That by both Sabbat rites does the cup of Heaven (Aethyr, Luciferian Sabbat) and Hell (Infernal, Chthonic Sabbat) are filled.

Cain was the Son born of by some accounts Samael (the Devil) and Lilith (through Eve), the first Satanist and Witch.

“It is said within the dark traditions that the Bible is mistaken with regards to Cain’s true parentage. Cain was in fact a half human, half demon bastard child of Adam and Lilith. It was for this reason that the Lord would not accept his offerings and prayers, rather than any specific demands of animal sacrifice. The tale continues with Cain being cursed to wander the earth as a vagabond, with the ground he tills never giving bounty.” – Nathaniel J. Harris, The Mark of Cain, the First Satanist and First Murder

In certain rabbinical literature, the Daughters of Cain were those who joined in sexual union with the Fallen Angels, the Watchers, and gave birth to the Nephilim, the Giants who were war like and brutal. They were said to have populated the earth in plenty, and attacked the children of Seth. In Manichaean lore, the Queen of Demons and spiritual initiator of Cain, Lilith – Az, taught the fallen angels to form physical bodies and join with others sexually. It is suggested also by writers Kaufmann Kohler, W.H. Bennett and Louis Ginzberg that the Children of Cain spent their days at the foot of a mountain (Eden?) practicing in wild orgies with the music of Lucifer through that created by Jubal. Women, the first Pairikas or Faeries/Witches, in their beautiful appearances, invited the sons of Seth (children of god) and copulated with them, bearing other children. This Jewish Folklore presents the earliest forms of the Witches Sabbat as a Luciferian celebration and practice of sexual magick.

“To Philo, likewise, Cain is the type of avarice, of “folly and impiety” (“De Cherubim,” xx.), and of self-love (“De Sacrificiis Abelis et Caini”; “Quod Deterius Potiori Insidiari Soleat,” 10). “He built a city” (Gen. iv. 17) means that “he built a doctrinal system of law-lessness, insolence, and immoderate indulgence in pleasure” (“De Posteritate,” 15); and the Epicurean philosophers are of the school of Cain, “claiming to have Cain as teacher and guide, who recommended the worship of the sensual powers in preference to the powers above, and who practiced his doctrine by destroying Abel, the expounder of the opposite doctrine” (ib. 11).” – The Jewish Encyclopedia, compiled by Kaufmann Kohler, W. H. Bennett, Louis Ginzberg

Herein we can see that Cain is thus a flesh and blood embodiment of the Luciferian Path itself, he is the Son of Satan and Lilith, the dark essence which is deeply connected with Eve, the wife of Adam. Cain is not only the patron father of Witches, also the symbol of the initiate upon the antinomian path.