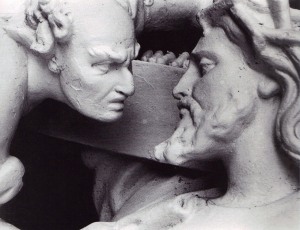 “… in his poem “Feelings,” dedicated to his childhood sweetheart and later wife Jenny von Westphalen, Marx expressed both his megalomania and his enormous thirst for destruction:

Heaven I would comprehend
I would draw the world to me;
Living, hating, I intend
That my star shine brilliantly …

… Worlds I would destroy forever,
Since I can create no world;
Since my call they notice never …

Here is a classical expression of Satan’s supposed reason for hating, and rebelling against, God.

In another poem, Marx writes of his triumph after he shall have destroyed God’s created world:

Then I will be able to walk triumphantly,
Like a god, through the ruins of their kingdom.
Every word of mine is fire and action.
My breast is equal to that of the Creator.

And in his poem “Invocation of One in Despair” Marx writes,

‘I shall build my throne high overhead
Cold, tremendous shall its summit be.
For its bulwark – superstitious dread
For its marshal – blackest agony.’

The Satan theme is most explicitly set forth in Marx’s “The Fiddler,” dedicated to his father:

‘See this sword?
the prince of darkness
Sold it to me.’

‘With Satan I have struck my deal,
He chalks the signs, beats time for me
I play the death march fast and free.’

Particularly instructive is Marx’s lengthy, unfinished poetic drama of this youthful period, Oulanem, A Tragedy. In the course of this drama his hero, Oulanem, delivers a remarkable soliloquy, pouring out sustained invective, a hatred of the world and of mankind, a hatred of creation and a threat and vision of total world destruction.

Thus Oulanem pours out his vials of wrath:

‘… I shall howl gigantic curses on mankind:
Ha! Eternity! She is an eternal grief …
Ourselves being clockwork, blindly mechanical,
Made to be the foul-calendars of Time and Space,
Having no purpose save to happen, to be ruined,
So that there shall be something to ruin …
If there is a something which devours,
I’ll leap within it, though I bring the world to ruins-
The world which bulks between me and the Abyss
I will smash to pieces with my enduring curses.
I’ll throw my arms around its harsh reality:
Embracing me, the world will dumbly pass away,
And then sink down to utter nothingness,
Perished, with no existence – that would be really living!’

‘… the leaden world holds us fast,
And we are chained, shattered, empty, frightened,
Eternally chained to this marble block of Being …
and we –
We are the apes of a cold God.’”