The path to enlightenment is not a single straight line. Buddhism is a religion with many different branches, all of which have their own interpretation and practice of the teachings. Nichiren Buddhism is a branch of Mahayana Buddhism that emphasizes the Lotus Sutra and the teachings of Nichiren.
If you’re curious about this branch of Buddhism and would like to learn more, this guide is for you. We’ll discuss the basics of Nichiren Buddhism, including its history, teachings, and three principle practices. 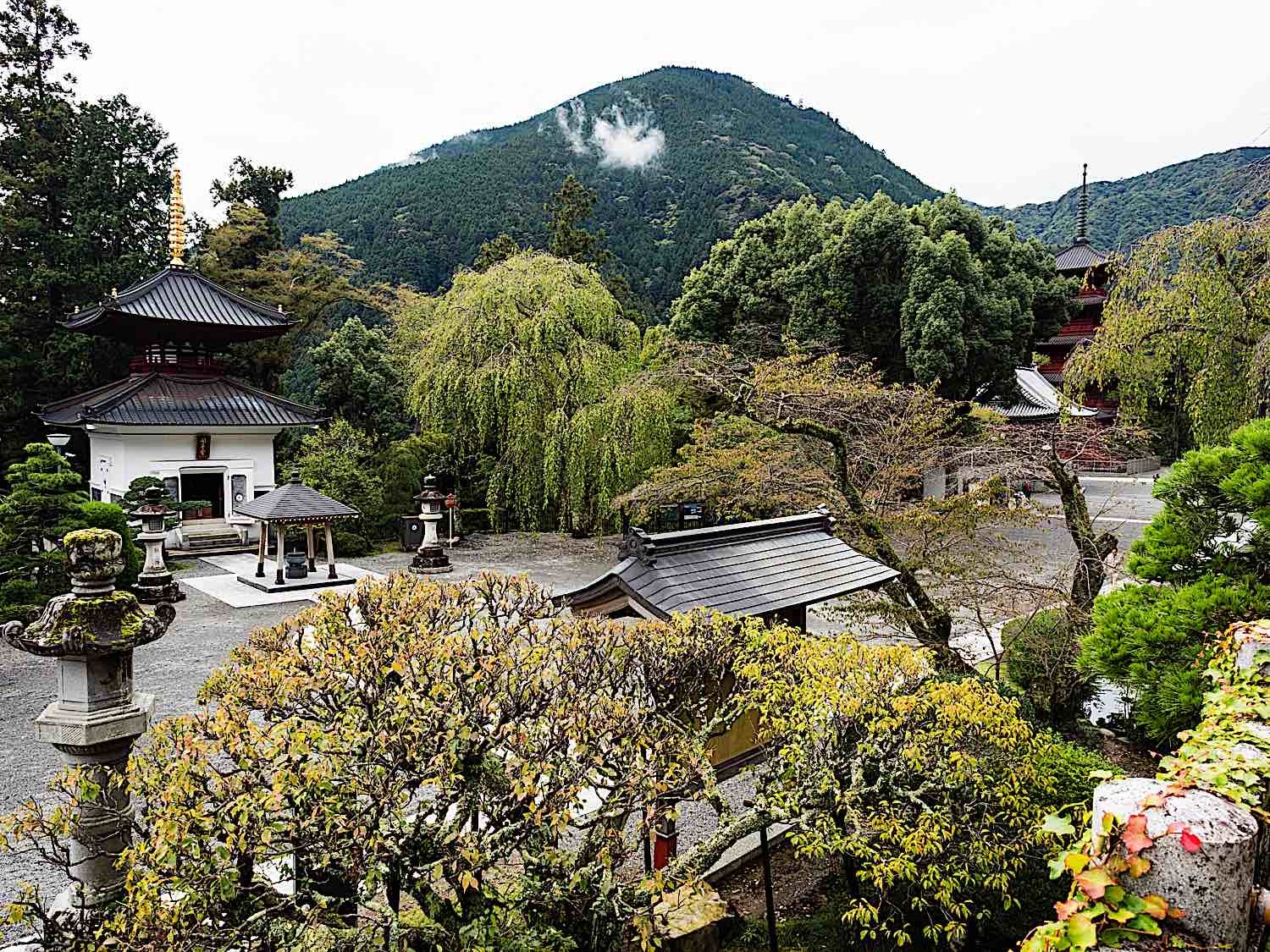 The History of Nichiren Buddhism

We must go back to his roots if we want to understand Nichiren and his teachings.

13th-century Japan is in the midst of great turmoil caused by the political shift from the feudal system to a more militarized government: the Kamakura Shogunate. Nichiren, born into a peasant family, had a deep understanding of the suffering that people were going through during this time.[1]

For 20 years, he traveled throughout the country, studying various Buddhist scriptures in an attempt to find a way to ease the people’s suffering. He eventually concluded that the only way to do this was to revive Buddhism and make it relevant to the Japanese people again.

During his lifetime, Nichiren was seen as a controversial figure due to his criticisms of other branches of Buddhism and his belief that the Lotus Sutra was the only way to achieve enlightenment. However, his teachings began to gain popularity after his death, and today Nichiren Buddhism is practiced by more than 12 million people in 188 countries worldwide.[2] 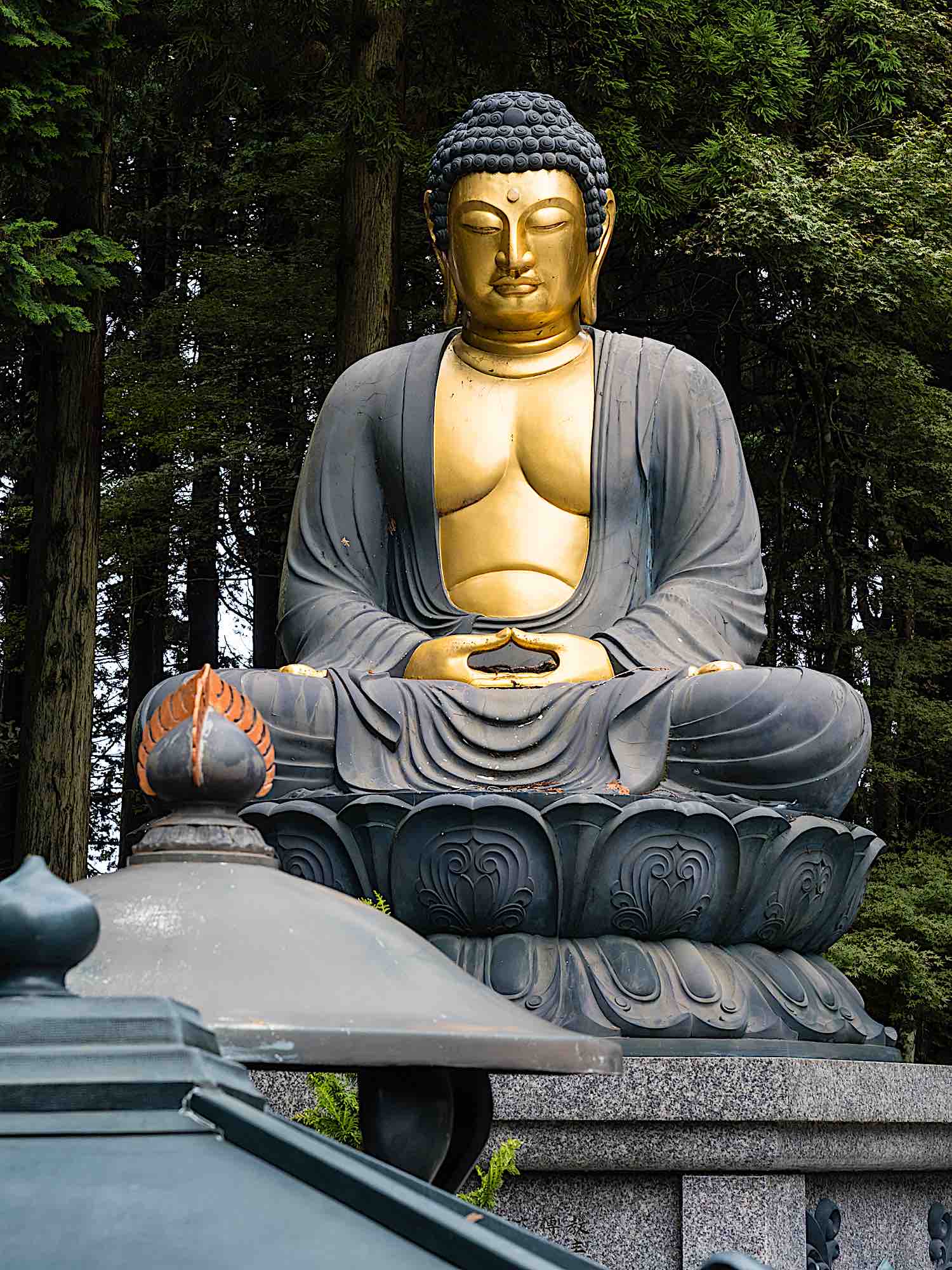 The Lotus Sutra is a Mahayana Buddhist scripture written in India during the 4th or 5th century CE. It’s seen as one of the most important texts in Buddhism, and its teachings are at the heart of Nichiren Buddhism.

In fact, it is believed that Nichiren kept a copy of The Lotus Sutra with him at all times for further study and reflection. 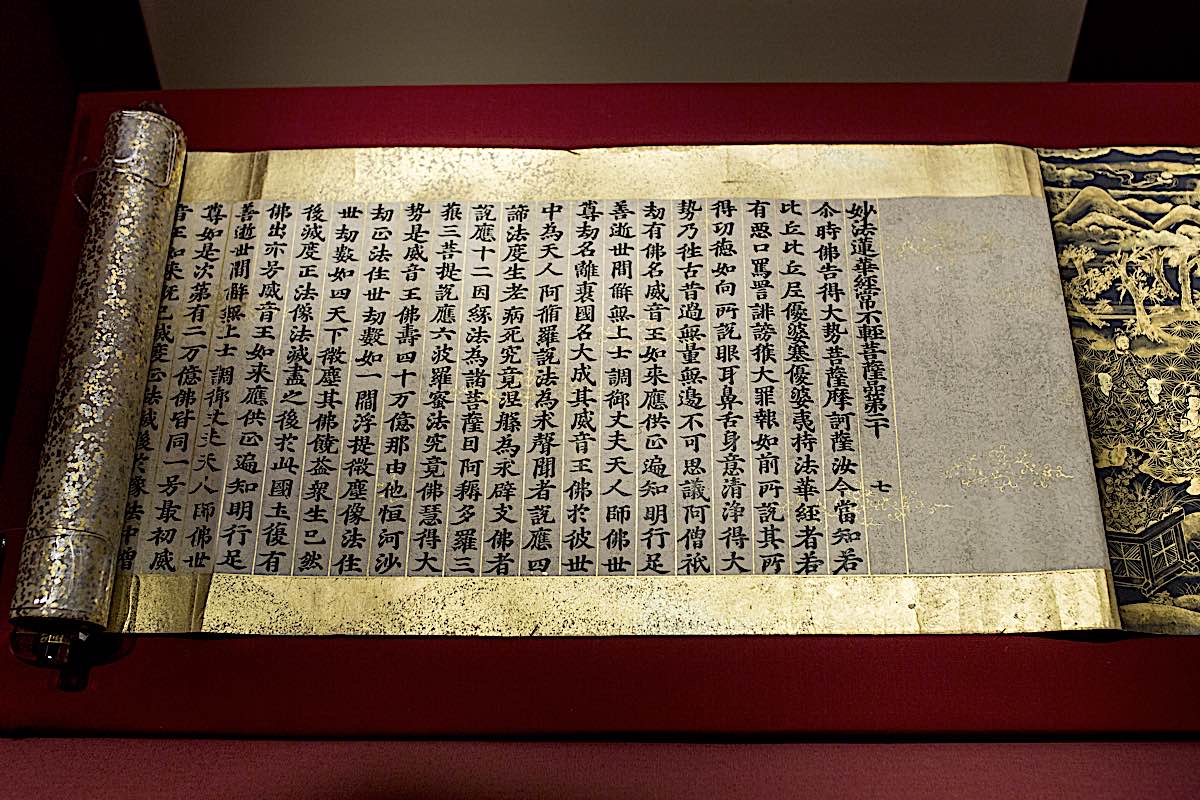 The Lotus Sutra teaches that all beings have the potential to reach ‘Buddhahood’ within them and that anyone can achieve enlightenment. It’s this message of hope and possibility that Nichiren felt would resonate with the people of his time.

At its core, Nichiren Buddhism is about making the whole of society better by empowering each individual to take control of their own lives. The result is a nation of’ Bodhisattvas,’ or Buddha-like beings, who are spreading the teachings of Buddhism and helping others to achieve enlightenment. 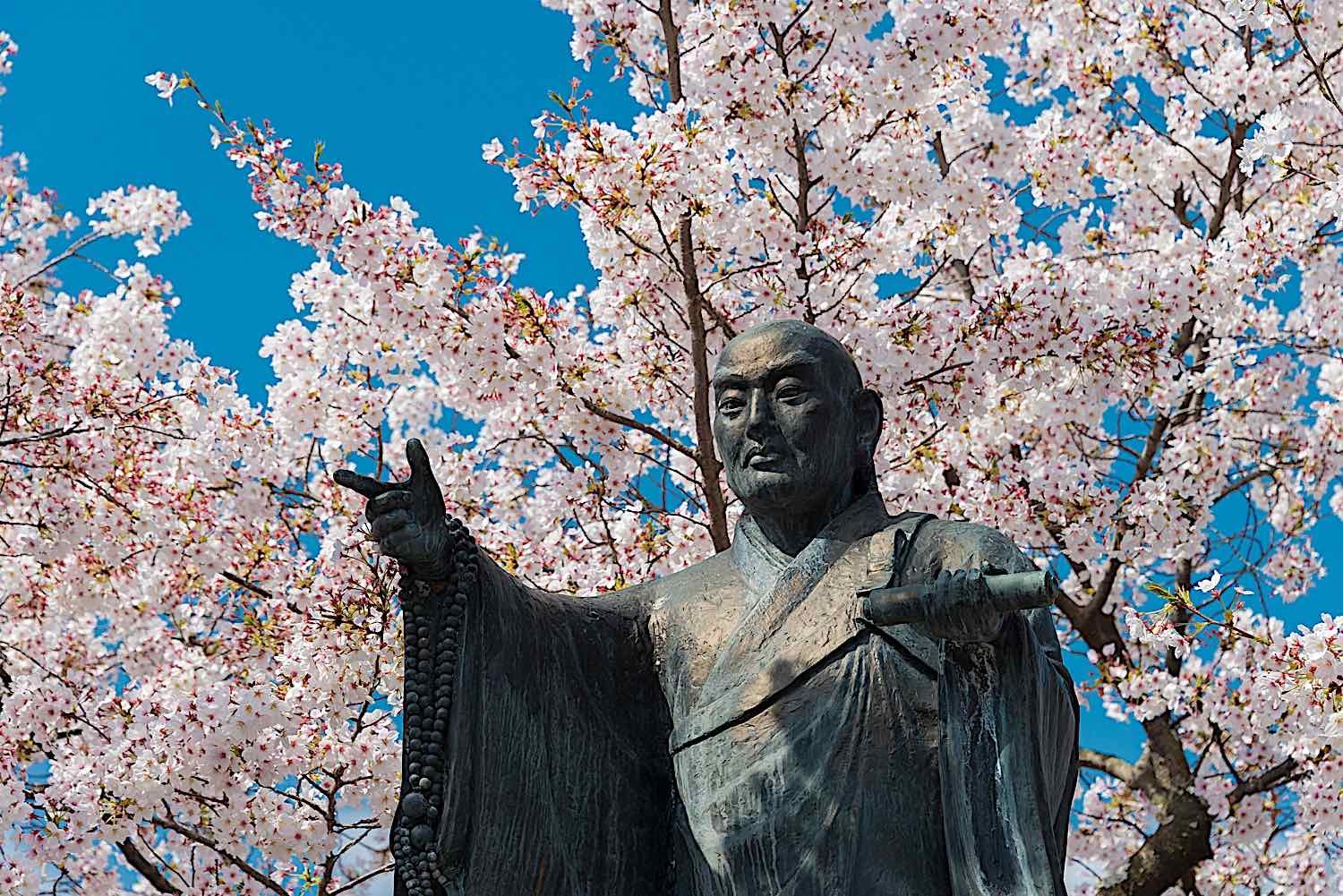 A statue of Nichiren at Myoren-ji Temple in Kamigyo.

Nichiren’s road to enlightenment can be split into three phases. The first phase was his study of various Buddhist scriptures. The second stage begins when Nichiren is exiled to Sado Island for speaking against the government, during which time he focuses on writing.

He publishes two books: ‘On the Opening of the Eyes and ‘The Object of Devotion for Observing the Mind in the Fifth Five-Hundred Year Period.’ He shares harrowing details about his near-execution by beheading and how he saw it as a rebirth. He continues to argue that reading the Lotus Sutra is the only way to achieve enlightenment and that it is more important than any other Buddhist scripture. [2]

The third and final phase of Nichiren’s life and teachings was spent on Mount Minobu. Here, he began training disciples in his teachings and spreading the word of Buddhism to the masses. Although his followers faced a constant threat of persecution, they managed to keep the religion alive, and eventually, it began to take root in society. 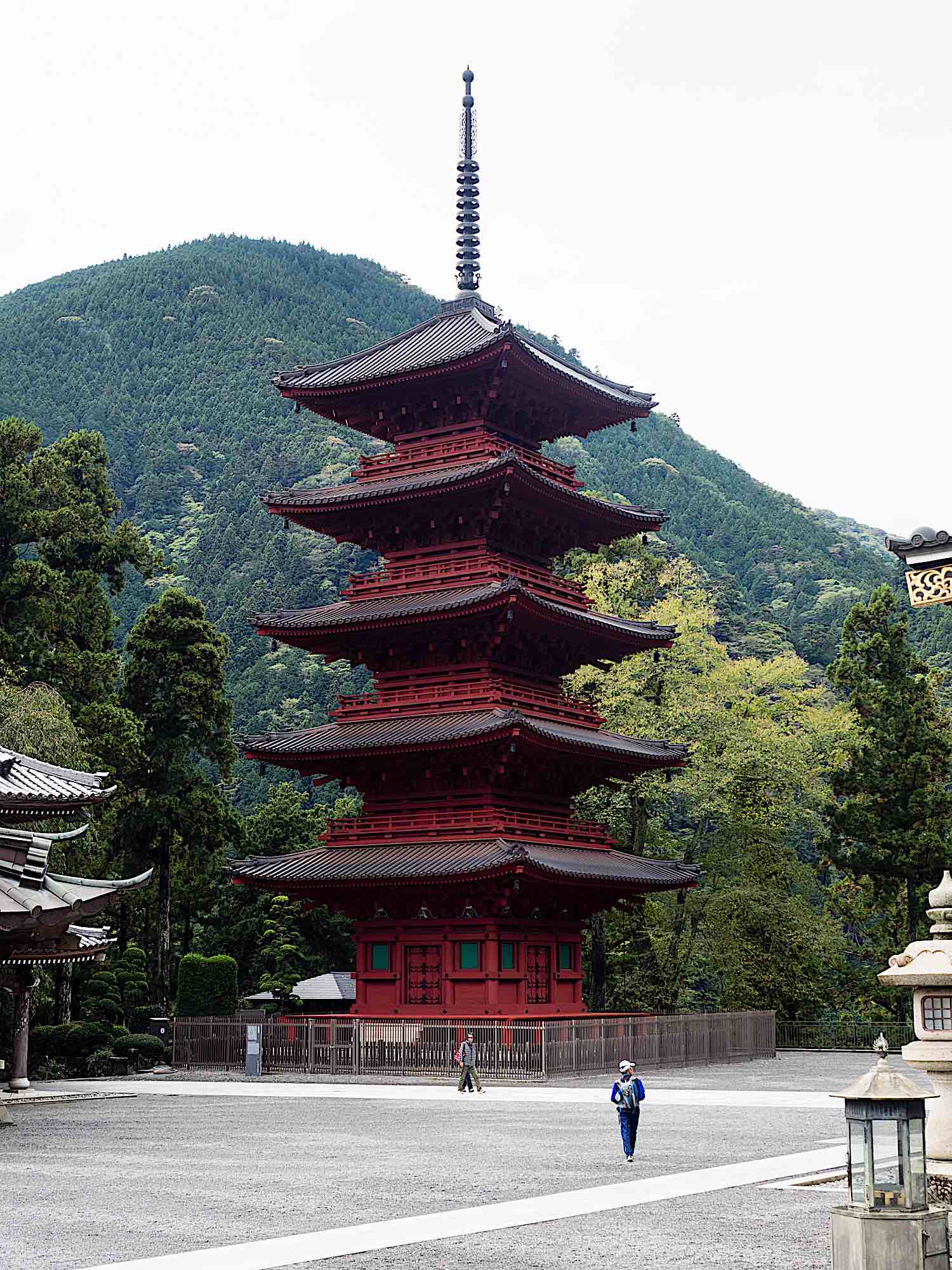 Now that we’ve set the stage let’s dive into the three principle practices of Nichiren Buddhism. Nichiren believed these practices were essential for achieving nirvana and improving Japan’s social and political landscape.

1. The Faith in Nichiren’s Gohonzon

The first practice is to have faith in Nichiren’s Gohonzon. The Gohonzon is a mandala that Nichiren created as a tool for meditation and spiritual growth. It contains the names of the Buddha and his followers, as well as symbols that represent different aspects of Buddhist teachings. 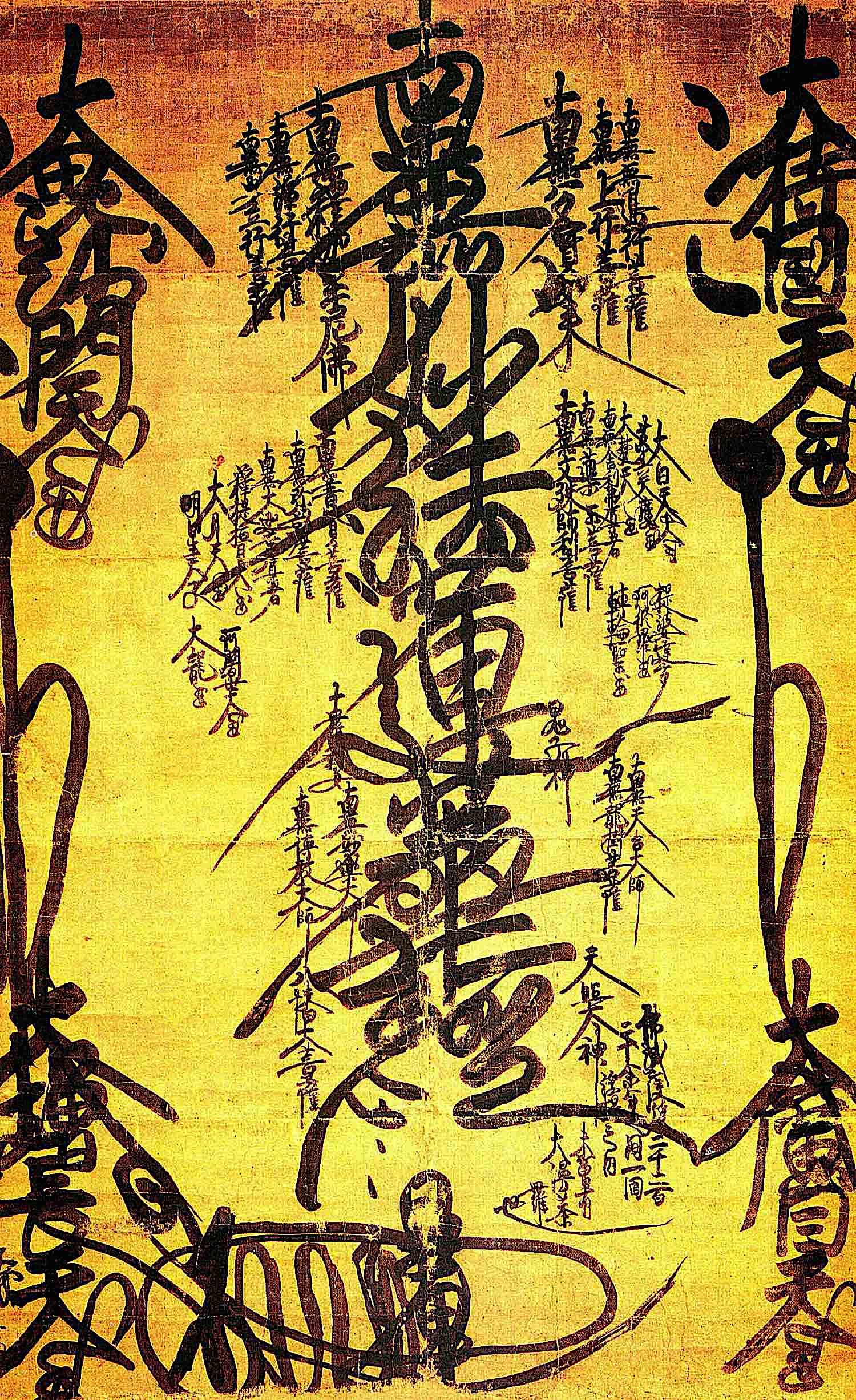 A Gohonzon that was inscribed by Nichiren just before his death in 1280. The central logographs depict the official title of the Lotus Sūtra

When you meditate on the Gohonzon, you align yourself with the Buddha’s enlightened mind and open yourself up to receive his wisdom and guidance. The Gohonzon is not just a physical object but a powerful tool that can help you to connect with your higher self.

The Gohonzon uses Chinese calligraphy to represent the Buddha’s teachings. It is hung on a scroll or placed on an altar in a place of honor in your home. It’s usually accompanied by a candle and incense, used as offerings to the Buddha.

The act of meditating on the Gohonzon is called Daimoku, and it’s an essential part of Nichiren Buddhism. When you chant Daimoku, you are reciting the phrase

Here is an easy-going version of the mantra chanting:

Here is a faster style of chanting (15 minutes):

This phrase encapsulates the core teachings of Nichiren Buddhism, which is that all beings have the potential to achieve Buddhahood. By chanting Daimoku, you affirm your faith in this principle and open yourself up to its power.

There are many ways to chant Daimoku, but the most common is to recite it slowly and with feeling. You can also chant it along with a group of people, which is said to be even more powerful.

Another thing to keep in mind is that you don’t need to be a Buddhist to chant Daimoku. Anyone can benefit from its power, regardless of their religious beliefs.

3. The study of Nichiren’s scriptural writings

The third and final practice of Nichiren Buddhism is the study of Nichiren’s scriptural writings, which are known as the Gosho. These various texts contain Nichiren’s thoughts on different topics, such as the nature of reality, the importance of taking action, and the relationship between Buddha and humanity.
The Gosho texts, letters, and stories are an essential part of Nichiren Buddhism because they provide guidance for how we should live our lives. By studying them, we can gain a deeper understanding of religion and the world around us.

One of the most famous texts in the Gosho is The Letter from Sado, which Nichiren wrote during his exile on the island of Sado. In this letter, Nichiren reinforces the importance of the Lotus Sutra, comparing it to a healthy dose of cow’s milk. He goes on to compare other sutras to donkey’s milk, which was thought to be poisonous.

The other texts in the Gosho are equally as powerful and provide insights into a variety of topics. 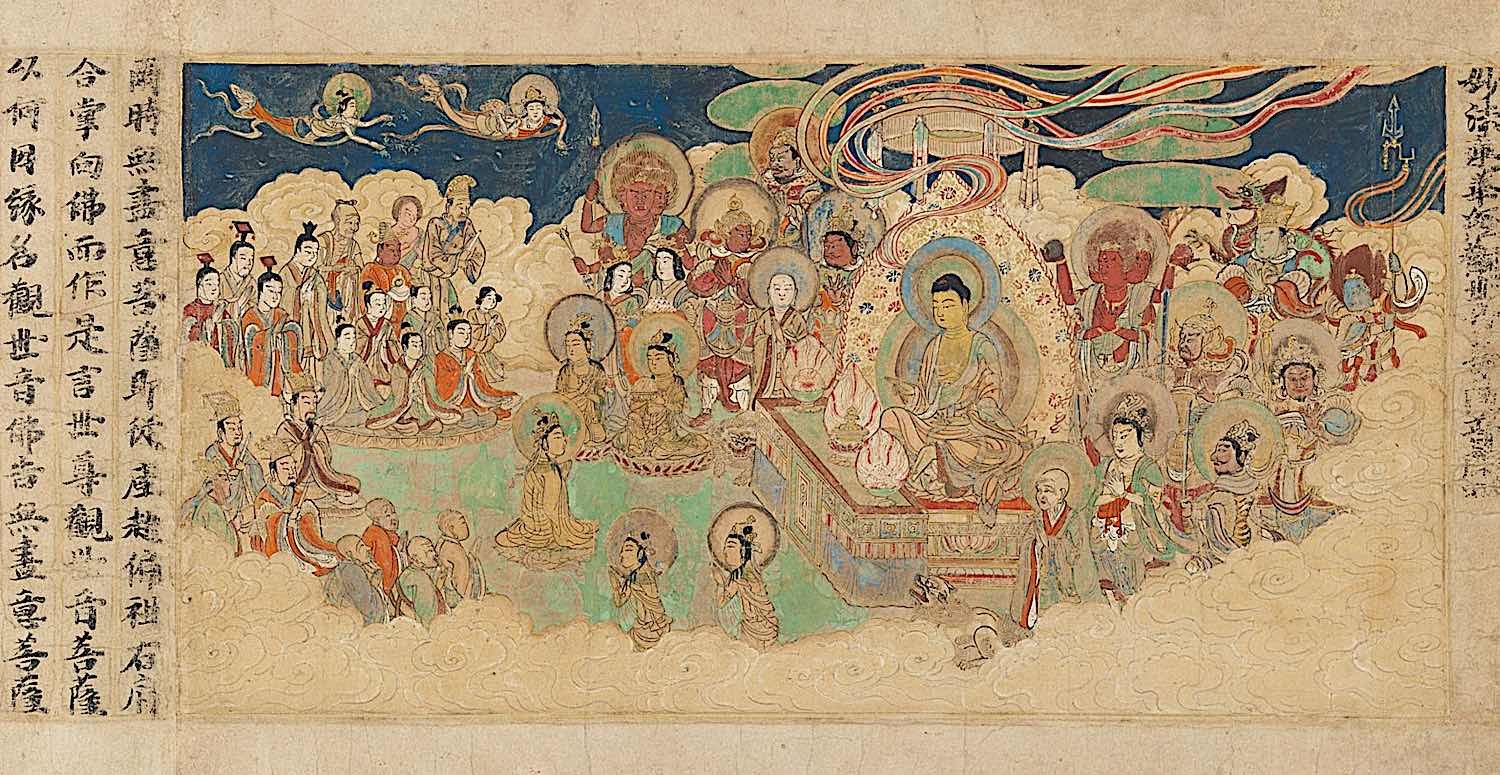 A leaf of a Japanese translation of the Lotus Sutra showing the grand assembly from chapter 1.

Differences and similarities: Nichiren and other traditions

Now that we’ve gone over the three principle practices of Nichiren Buddhism let’s take a look at how it differs from other schools of Buddhism.

The most notable difference is that Nichiren Buddhism revolves entirely around the Lotus Sutra, whereas other schools of Buddhism focus on a variety of different sutras, like the Heart Sutra and the Diamond Sutra.

Another difference is that Nichiren Buddhists believe that all beings have the potential to achieve Buddhahood, regardless of their karma or past actions. This is in contrast to other schools of Buddhism, which teach that only those with good karma can achieve enlightenment.

As for similarities, Nichiren Buddhism shares many of the same core beliefs as other schools of Buddhism. For example, they both believe in karma and reincarnation. They also both teach that the path to enlightenment is through meditation and mindfulness.

So, while there are some minor differences between Nichiren Buddhism and other schools of Buddhism, the two paths are more similar than they are different.

Nichiren died in 1282, but his teachings live on to this day. His followers continue to practice the three principle practices of Nichiren Buddhism, and his writings continue to inspire new generations of Buddhists.

Nichiren was a controversial figure during his lifetime, but his legacy is undeniable. He was an influential proponent of social and political change, and his teachings have helped shape the modern world of Buddhism.

He was also the first Buddhist teacher to emphasize the importance of chanting Daimoku as a way to connect with the Buddha and receive his wisdom and guidance.

His legacy is one of hope and possibility. He showed us that we have the power to change our lives and the world around us.

Who should consider learning about Nichiren Buddhism?

Nichiren’s teachings are for everyone and anyone. However, some people may be particularly interested in his teachings. Opposing schools of thought see Nichiren Buddhism as very individualist because of its hyperfocus on the Lotus Sutra. This may appeal to people looking for a more personalized spiritual path.
If you’re interested in social and political change, then Nichiren Buddhism is also for you. His

Nichiren Buddhism is a unique and powerful form of Buddhism that has much to offer its followers. The three principle practices of Nichiren Buddhism provide a solid foundation for those seeking guidance and wisdom.

If you’re looking for a tradition within Buddhism that is simple yet profound, Nichiren Buddhism may be right for you. There’s a certain optimism to be had when reinforcing the belief that anyone can achieve Buddhahood. And the study of Nichiren’s 700+ texts can provide valuable insights into how we should live our lives.