Why do we call Prajnaparamita — and Her Emanations, such as Tara — the Mother of the Buddhas? Is Prajnaparamita a Sutra or a Goddess or both? Venerable Zasep Rinpoche explained,

Prajnaparamita is the most elevated form of both — the ultimate “Perfection of Wisdom” sutra and the ultimate wisdom mother Buddha. Why is Wisdom the Mother of Buddhas? In the great Mahayana (Great Vehicle) Buddhist view, the Wisdom of Emptiness is the metaphorical birthplace of the wakened mind, or Bodhicitta. The mother is the understanding of the ultimate nature of Emptiness. Since all beings — including each of us — have Buddha Nature, Prajnaparamita is ultimately the Mother of All, whether in the form of Sutra, or Mother Buddha. 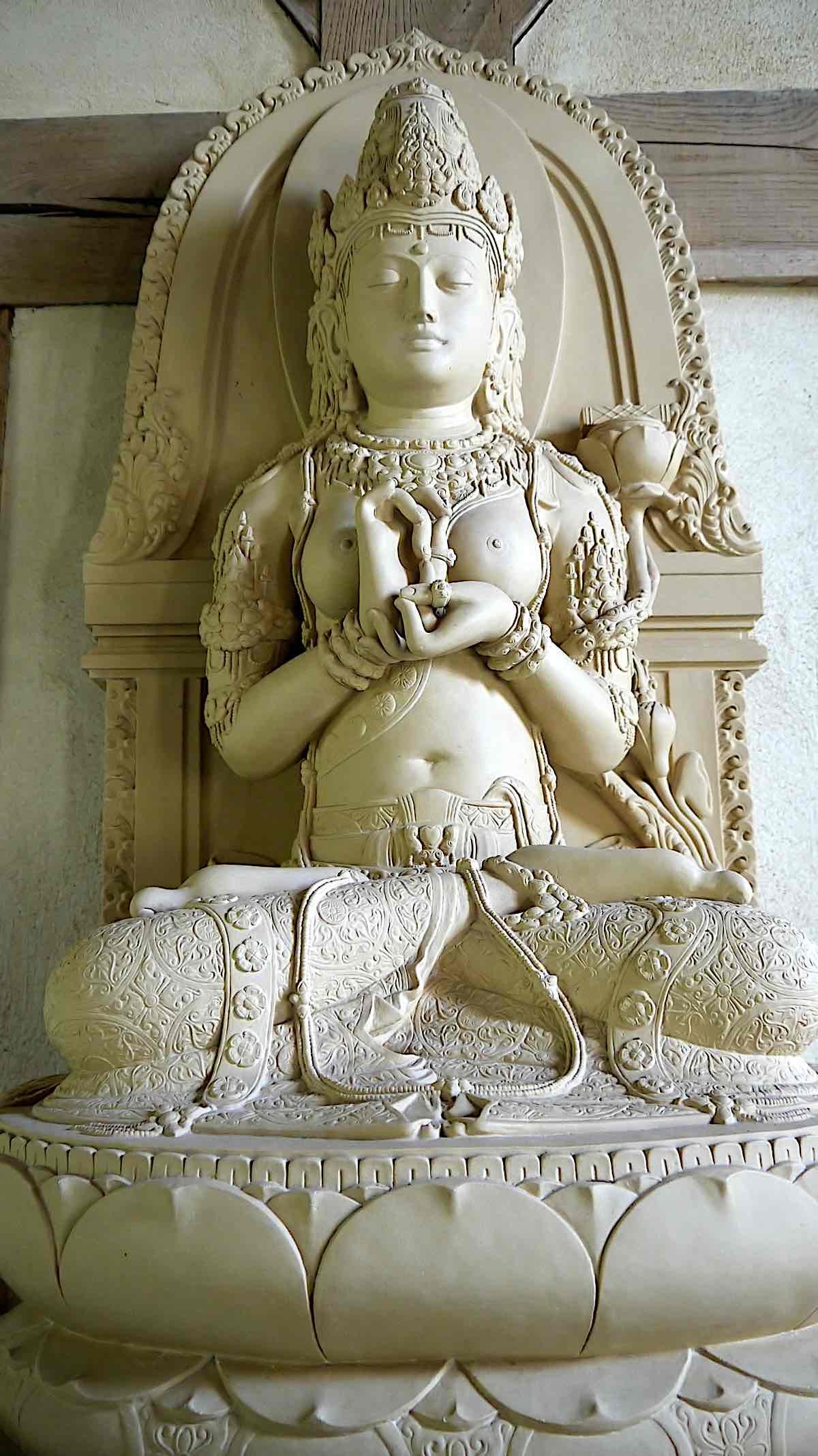 Prajnaparamita Sutras are the most elevated of Sutras in Mahayana Buddhism, especially the words of Avalokiteshvara Bodhisattva in the Heart Sutra, words sanctioned by Shakyamuni Buddha. The ultimate essence of Buddhist Wisdom can be said to be found in these translated lines from the Heart Sutra:

“Form is Emptiness; Emptiness is Form.”

Deity is Emptiness, Emptiness is Deity?

Once Emptiness is understood properly — Empty of inherent existence, without nihilistic misinterpretation — it shouldn’t be a surprise that the most elevated of Wisdom Deities arises from this sutra. In the “ultimate reality” philosophy of Mahayana, you could almost paraphrase the Heart Sutra: Deity is Emptiness; Emptiness is Deity. The two purposes of deity visualization and practice are to help us realize we are One with our Yidam deity (whichever deity — all Yidams are also One) and to help us understand all perceptions are ultimately empty of inherent reality, including all we touch, feel, hear, see and even think. [For a more in-depth feature on Emptiness, see>>] 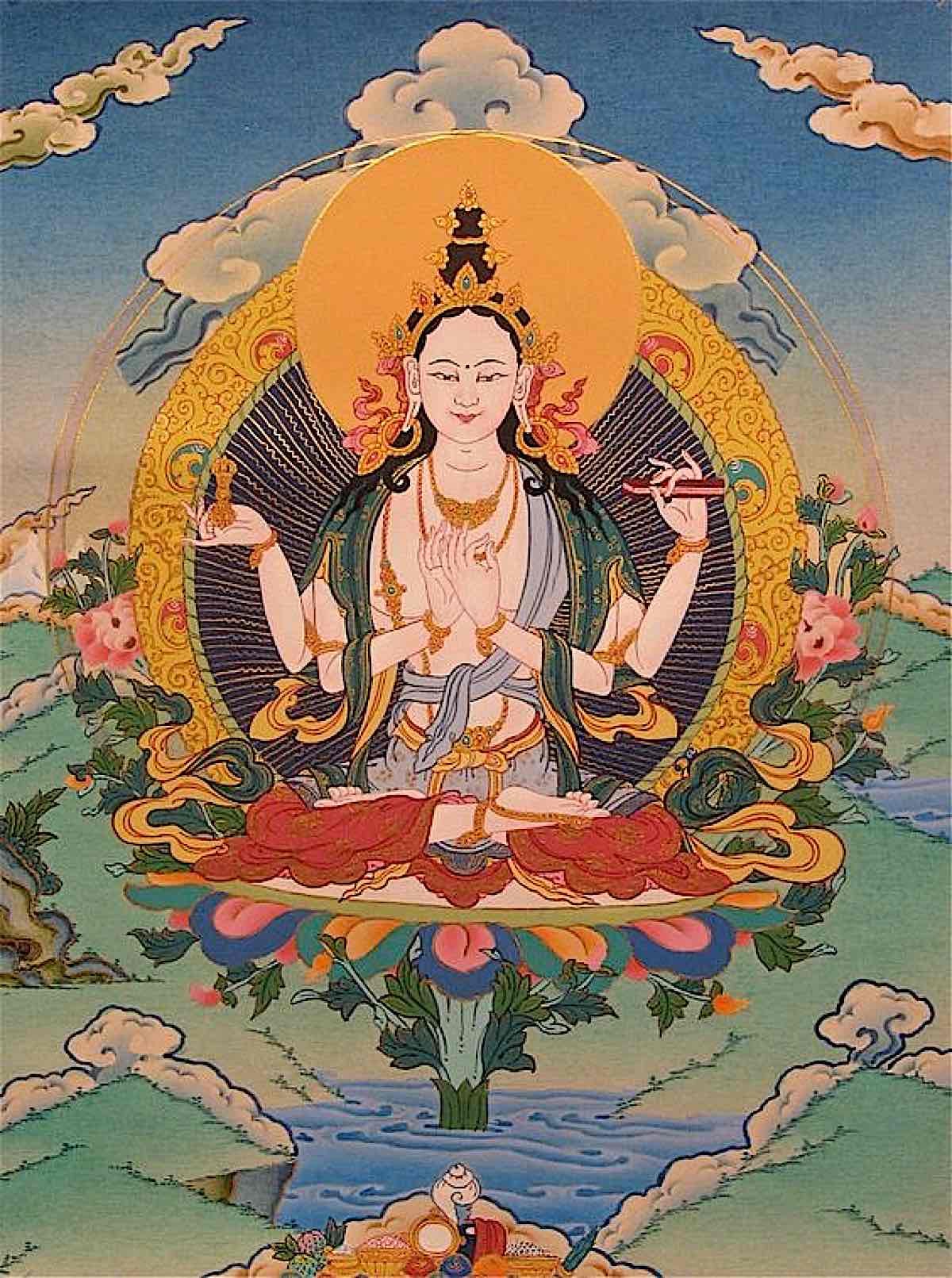 In Mahayana, visual symbols carry as much meaning as words. Mahamata Prajnaparamita, as a deity, “distils” and visualizes the great Wisdom expressed in the Prajnaparamita Sutra. “Maha” means “Great” and Mata means “Mother”  (माता) — in TIbetan Yum Chenmo. Why the Great Mother? The Enlightenment of any Buddha — ourselves included, because we have Buddha Nature — relies on the Great Mother Wisdom. Wisdom is Mother because our spiritual realizations rely on Her.  Whether you view Wisdom as a concept or an Enlightened Deity — or deities, since Wisdom manifests in multiple forms — is the same.

Zasep Tulku Rinpoche, in a description of a forthcoming Mahamata Prajnaparamita event (see event details below, or visit Gaden West event page>>), that

“Prajnaparamita can also refer to the Bodhisattva known as the “Great Mother,” the Mother of all the Buddhas. She is the goddess who appears in many emanations to serve humanity. She is known as Yum Chenmo in Tibetan, and features prominently in the Chod Dharma practice system taught by Padampa Sangye and the famous Dakini, Machig Labdron.

Ultimately, all Wisdom manifestations arise from Prajnaparamita: Tara, our Protective Wisdom Mother, Vajrayogini, supreme Dakini Mother, Palden Lhamo, wrathful protector, and most of the female Buddha aspects. All are One with the Great Mother Yum Chenmo Prajnaparamita. 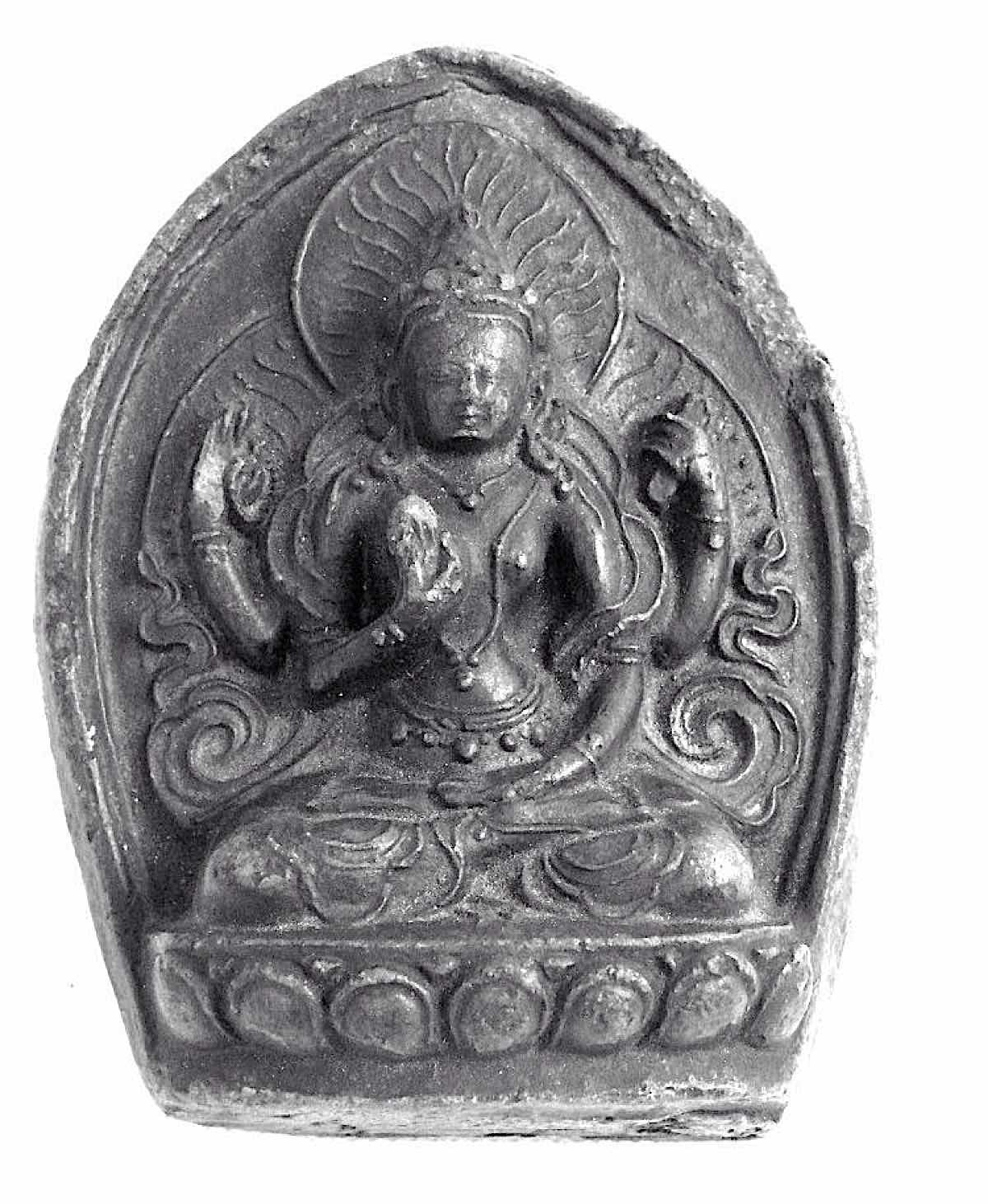 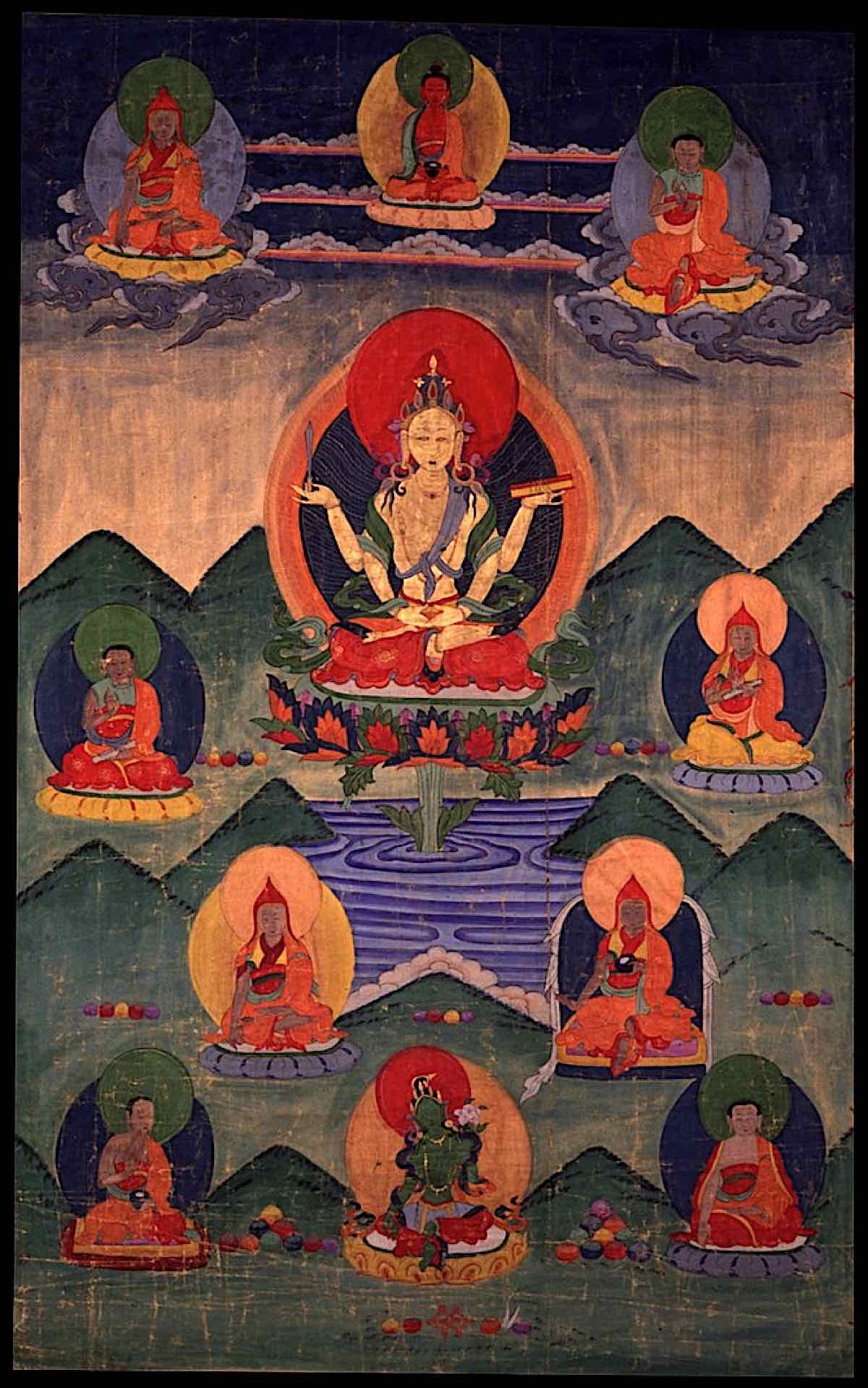 In Professor Robert Thurman’s forward to Lex Hixon’s seminal treatise “Mother of the Buddhas: Meditation son the Prajnaparamita” the Professor describes her as “a mother overflowing with kindness, opening her arms to all her innumerable children. And she is a very exacting mother, fiercely determined that no harm befall her children from any sort of error or misunderstanding.” This misunderstanding in turn “dulls the razor’s edge of wisdom’s sword that must cut away confusion and free the practitioners genius from entrapment in habitual misinterpretations.”

Prajnaparamita as the Mother of Wisdom becomes the deified embodiment of wisdom. As the Wisdom Mother, it is said that all Buddhas relied on Her to attain Enlightenment. Wisdom itself is the Mother of All Buddhas — and Prajnaparamita, and her Mother Goddess emanations — notably beloved Tara, the Liberator — literally represent Wisdom as a deity. It is through Wisdom we attain realizations. It is through Wisdom that Tara saves us from harm. Most female deities in Mahayana Buddhism could be considered emanations of Wisdom and the Mother Prajnaparamita. Likewise, male deities typically embody compassion, most famously as Avalokiteshvara (Chenrezig in Tibetan, Guanyin in Chinese, Kannon in Japanese.) 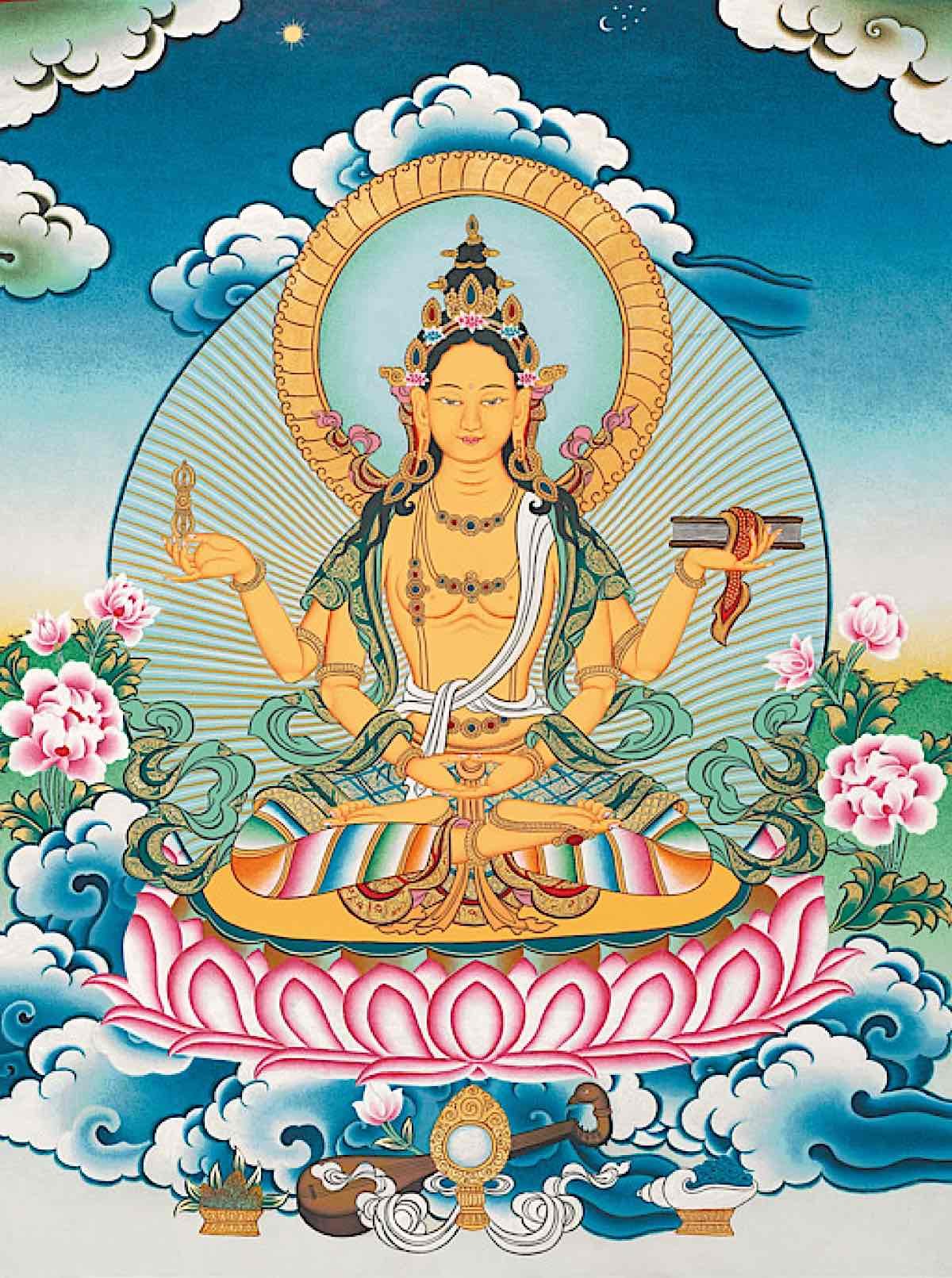 In its shortest form, the Prajanaparamita Sutra distills to the glorious Heart Sutra, which itself can be expressed in a single line — the “Heart Sutra” mantra. This mantra is also Her essence mantra, sometimes called “the other shore” mantra the very heart of the Heart Sutra:

“Para” literally means “other shore” — the symbolic language of achieving Enlightenment. Wisdom is the boat that crosses to that shore — propelled by the oars of compassion. (See Mantra below.) As deities, Prajnaparamita is Wisdom, while Avalokiteshvara, who spoke sutra, is Compassion — the co-equal concepts in Mahayana Buddhism.

Venerable Zasep Rinpoche explained that the translation of Prajnaparamita is 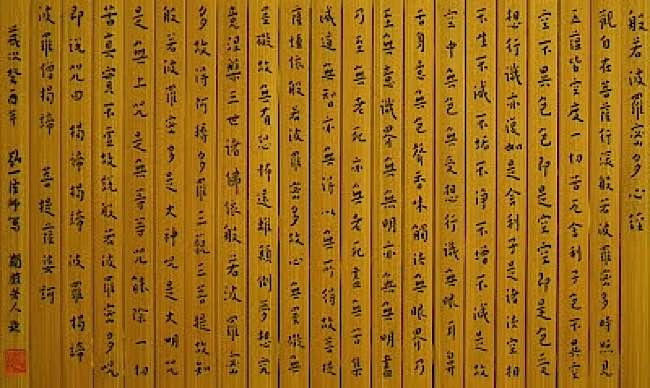 The Perfection of Wisdom Sutra is important to all schools of the Great Vehicle Mahayana Buddhism. The entire concept of visualizing deities in ideal forms is an expression of the illusory nature of reality — and the importance of Wisdom of Discernment.

Bodhisattva Mind is a Motherly Mind

According to Lex Hixon’s beautiful English translation of the Prajnaparamita Sutra, the “diamond being” — a Bodhisattva — is defined this way:

“The Bodhisattva will always maintain a motherly mind, consecrated to the constant protection, education and maturing of conscious beings… This Mahayana never succumbs to fear, anxiety or depression, and is never overwhelmed by the strange adventures in awareness in the three realms of relativity — mundane form, sublime form, and formlessness.”

In Lex Hixon’s own introduction in Mother of All the Buddhas [2], he adds,

“To sustain this wonderful courage and compassion, the bodhisattva drinks the mother’s milk of transcendent insight from the Prajnaparamita Sutra, for Prajnaparamita is mother, creator, native ground and tender wet-nurse in omniscience for every past, present and future Buddha or Awakened  One. All conscious beings, including ourselves, are these future Buddhas, still evolving…” 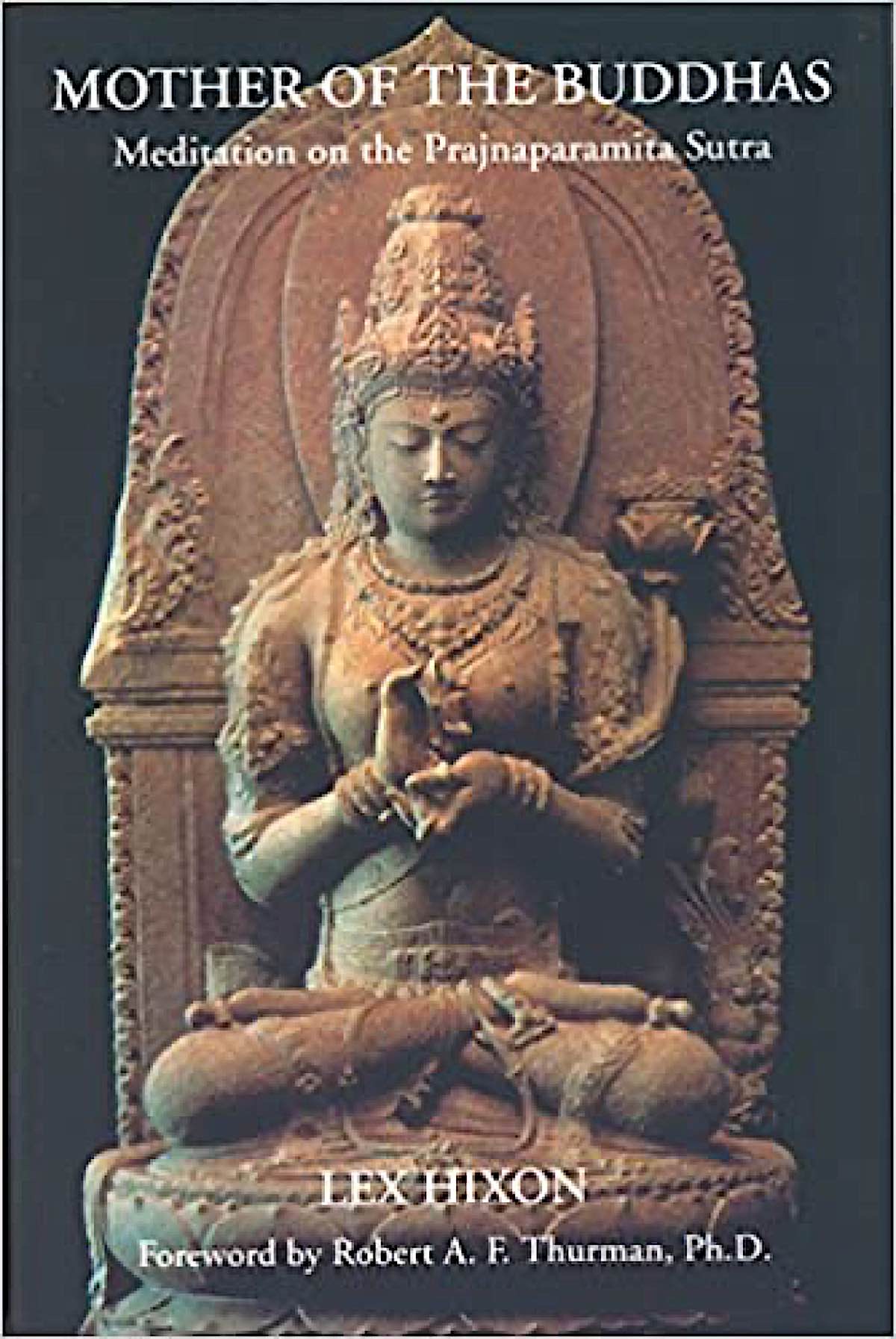 From Sutra to Deity

“The Mahayana is a vast reservoir in which the uncompromising insight of early Theravada Buddhism is preserved and which contains in seed form the brilliant explosiveness of Deity Yoga and the radically non-dualistic Mahamudra later expressed by Tantric Buddhism.” 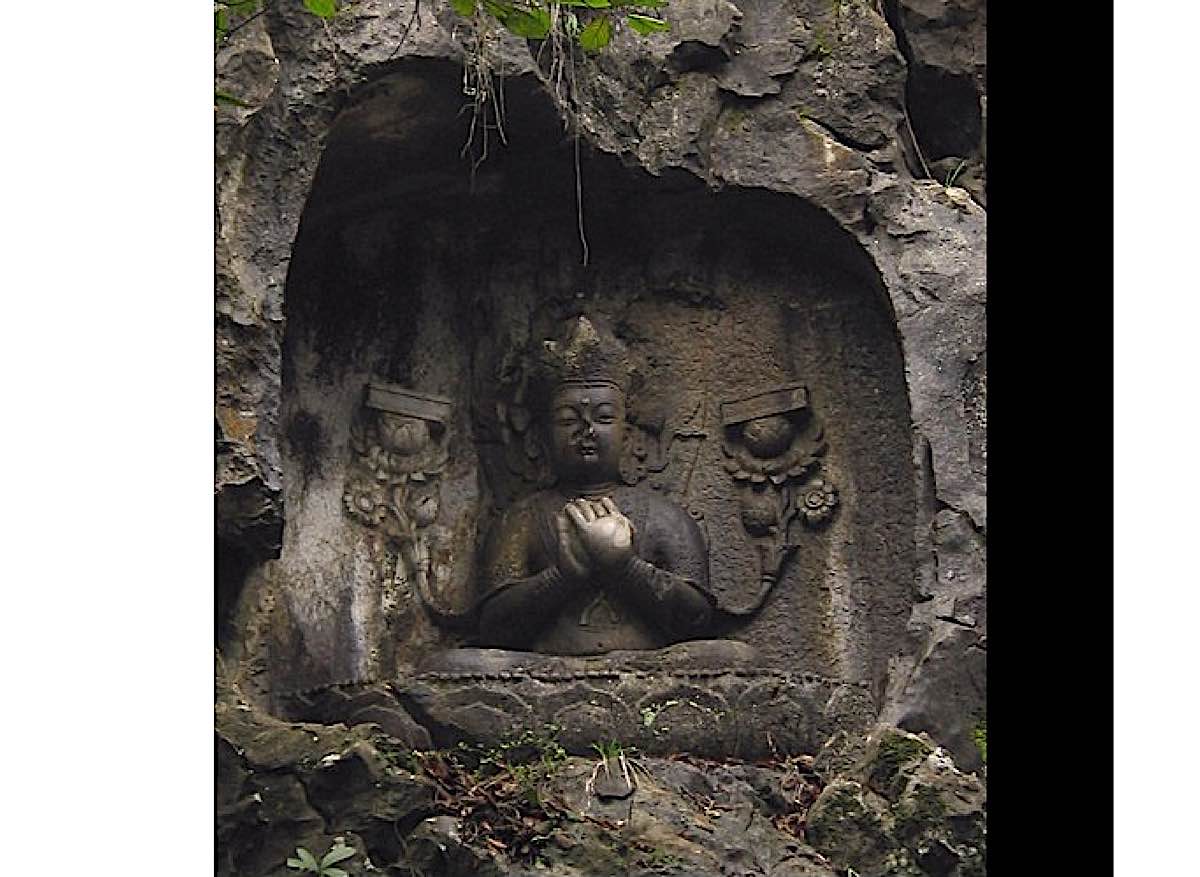 Ancient sculpture of Prajnaparamita in rock (1300-1399 dating) in China.

PARAGATE means gone to the further shore and is a stock Sanskrit expression used by Jains and Buddhists to refer to arahants. (The word PARA means the bank of a river opposite to the one on which one is presently standing.)

SVAHA is an indeclinable particle from Vedic Sanskrit. It is said to be the name of the wife of Agni, the god of fire. It is used at the end of a recitation that accompanies a burnt offering made at a Vedic sacrifice (rather as “amen” is used at the end of a prayer in Christian liturgy). It cannot really be translated, since it is a performative word rather than a word that conveys meaning.

More loosely translated, it means this: “You Brahmin priests with your fancy fire sacrifices aren’t the only ones who get people to heaven. We can do it without killing animals and wasting trees. So there.” [2]

Or, as Allen Ginsberg translated:

Full recitation of the Heart Sutra in English chanted form by the students of Dzongsar Khyentse Rinpoche — not to be missed:

The most famous lines in the ultimate sutra of Mahayana Buddhism are the words of the Bodhisattva of Compassion Avalokiteshvara, answering Shariputra with Shakyamuni listening and sealing (approving) the teaching:

“Shariputra, likewise, all phenomena are emptiness; without characteristic; unproduced, unceased; stainless, not without stain; not deficient, not fulfilled.

“Shariputra, therefore, in emptiness there is no form, no feeling, no discrimination, no compositional factors, no consciousness; no eye, no ear, no nose, no tongue, no body, no mind; no visual form, no sound, no odor, no taste, no object of touch, and no phenomenon. There is no eye element and so on up to and including no mind element and no mental consciousness element. There is no ignorance, no extinction of ignorance, and so on up to and including no aging and death and no extinction of aging and death. Similarly, there is no suffering, origination, cessation, and path; there is no exalted wisdom, no attainment, and also no non-attainment.

“Shariputra, therefore, because there is no attainment, bodhisattvas rely on and dwell in the perfection of wisdom, the mind without obscuration and without fear. Having completely passed beyond error, they reach the end-point of nirvana. All the buddhas who dwell in the three times also manifestly, completely awaken to unsurpassable, perfect, complete enlightenment in reliance on the perfection of wisdom.

“Shariputra, the bodhisattva mahasattva should train in the profound perfection of wisdom like that.”

Then the Bhagavan arose from that concentration and commended the bodhisattva mahasattva arya Avalokiteshvara saying: “Well said, well said, son of the lineage, it is like that. It is like that; one should practice the profound perfection of wisdom just as you have indicated; even the tathagatas rejoice.”

[For more on the Heart Sutra see>>] 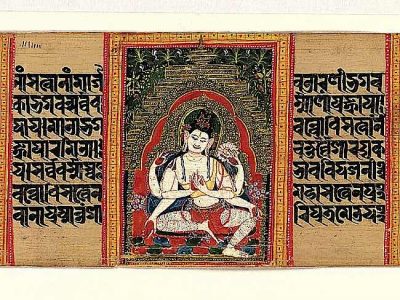 Six-Armed Avalokiteshvara Expounding the Dharma: Folio from a Manuscript of the Ashtasahasrika Prajnaparamita (Perfection of Wisdom) | India (West Bengal)

[1] Zasep Tulku Rinpoche, description of an Empowerment event at Gaden For the West at Tashi Choling in Nelson BC (via Zoom). https://gadenforthewest.org/Prajnaparamita-empowerment-2021.html