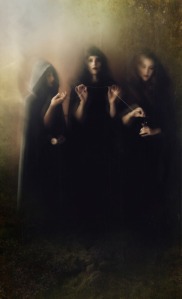 “Samhain. All Hallows. All Hallow’s Eve. Hallow E’en. Halloween. The most magical night of the year. Exactly opposite Beltane on the wheel of the year, Halloween is Beltane’s dark twin. A night of glowing jack-o-lanterns, bobbing for apples, tricks or treats, and dressing in costume. A night of ghost stories and seances, tarot card readings and scrying with mirrors. A night of power, when the veil that separates our world from the Otherworld is at its thinnest. A ‘spirit night’, as they say in Wales.

All Hallow’s Eve is the eve of All Hallow’s Day (November 1st). And for once, even popular tradition remembers that the Eve is more important than the Day itself, the traditional celebration focusing on October 31st, beginning at sundown. And this seems only fitting for the great Celtic New Year’s festival. Not that the holiday was Celtic only. In fact, it is startling how many ancient and unconnected cultures (the Egyptians and pre-Spanish Mexicans, for example) celebrated this as a festival of the dead. But the majority of our modern traditions can be traced to the British Isles.

The Celts called it Samhain, which means ‘summer’s end’, according to their ancient two-fold division of the year, when summer ran from Beltane to Samhain and winter ran from Samhain to Beltane. (Some modern Covens echo this structure by letting the High Priest ‘rule’ the Coven beginning on Samhain, with rulership returned to the High Priestess at Beltane.) According to the later four-fold division of the year, Samhain is seen as ‘autumn’s end’ and the beginning of winter. Samhain is pronounced (depending on where you’re from) as ‘sow-in’ (in Ireland), or ‘sow-een’ (in Wales), or ‘sav-en’ (in Scotland), or (inevitably) ‘sam-hane’ (in the U.S., where we don’t speak Gaelic).

Not only is Samhain the end of autumn; it is also, more importantly, the end of the old year and the beginning of the new. Celtic New Year’s Eve, when the new year begins with the onset of the dark phase of the year, just as the new day begins at sundown. There are many representations of Celtic gods with two faces, and it surely must have been one of them who held sway over Samhain. Like his Greek counterpart Janus, he would straddle the threshold, one face turned toward the past in commemoration of those who died during the last year, and one face gazing hopefully toward the future, mystic eyes attempting to pierce the veil and divine what the coming year holds. These two themes, celebrating the dead and divining the future, are inexorably intertwined in Samhain, as they are likely to be in any New Year’s celebration.

As a feast of the dead, it was believed the dead could, if they wished, return to the land of the living for this one night, to celebrate with their family, tribe, or clan. And so the great burial mounds of Ireland (sidh mounds) were opened up, with lighted torches lining the walls, so the dead could find their way. Extra places were set at the table and food set out for any who had died that year. And there are many stories that tell of Irish heroes making raids on the Underworld while the gates of faery stood open, though all must return to their appointed places by cock-crow.

As a feast of divination, this was the night par excellence for peering into the future. The reason for this has to do with the Celtic view of time. In a culture that uses a linear concept of time, like our modern one, New Year’s Eve is simply a milestone on a very long road that stretches in a straight line from birth to death. Thus, the New Year’s festival is a part of time. The ancient Celtic view of time, however, is cyclical. And in this framework, New Year’s Eve represents a point outside of time, when the natural order of the universe dissolves back into primordial chaos, preparatory to re-establishing itself in a new order. Thus, Samhain is a night that exists outside of time and hence it may be used to view any other point in time. At no other holiday is a tarot card reading, crystal reading, or tea-leaf reading so likely to succeed.

The Christian religion, with its emphasis on the ‘historical’ Christ and his act of redemption 2000 years ago, is forced into a linear view of time, where ‘seeing the future’ is an illogical proposition. In fact, from the Christian perspective, any attempt to do so is seen as inherently evil. This did not keep the medieval Church from co-opting Samhain’s other motif, commemoration of the dead. To the Church, however, it could never be a feast for all the dead, but only the blessed dead, all those hallowed (made holy) by obedience to God – thus, All Hallow’s, or Hallowmas, later All Saints and All Souls.

There are so many types of divination that are traditional to Hallowstide, it is possible to mention only a few. Girls were told to place hazel nuts along the front of the firegrate, each one to symbolize one of her suitors. She could then divine her future husband by chanting, ‘If you love me, pop and fly; if you hate me, burn and die.’ Several methods used the apple, that most popular of Halloween fruits. You should slice an apple through the equator (to reveal the five-pointed star within) and then eat it by candlelight before a mirror. Your future spouse will then appear over your shoulder. Or, peel an apple, making sure the peeling comes off in one long strand, reciting, ‘I pare this apple round and round again; / My sweetheart’s name to flourish on the plain: / I fling the unbroken paring o’er my head, / My sweetheart’s letter on the ground to read.’ Or, you might set a snail to crawl through the ashes of your hearth. The considerate little creature will then spell out the initial letter as it moves.

Perhaps the most famous icon of the holiday is the jack-o-lantern. Various authorities attribute it to either Scottish or Irish origin. However, it seems clear that it was used as a lantern by people who traveled the road this night, the scary face to frighten away spirits or faeries who might otherwise lead one astray. Set on porches and in windows, they cast the same spell of protection over the household. (The American pumpkin seems to have forever superseded the European gourd as the jack-o-lantern of choice.) Bobbing for apples may well represent the remnants of a Pagan ‘baptism’ rite called a ‘seining’, according to some writers. The water-filled tub is a latter-day Cauldron of Regeneration, into which the novice’s head is immersed. The fact that the participant in this folk game was usually blindfolded with hands tied behind the back also puts one in mind of a traditional Craft initiation ceremony.

The custom of dressing in costume and ‘trick-or-treating’ is of Celtic origin with survivals particularly strong in Scotland. However, there are some important differences from the modern version. In the first place, the custom was not relegated to children, but was actively indulged in by adults as well. Also, the ‘treat’ which was required was often one of spirits (the liquid variety). This has recently been revived by college students who go ‘trick-or-drinking’. And in ancient times, the roving bands would sing seasonal carols from house to house, making the tradition very similar to Yuletide was sailing. In fact, the custom known as ‘caroling’, now connected exclusively with mid-winter, was once practiced at all the major holidays. Finally, in Scotland at least, the tradition of dressing in costume consisted almost exclusively of cross-dressing (i.e., men dressing as women, and women as men). It seems as though ancient societies provided an opportunity for people to ‘try on’ the role of the opposite gender for one night of the year. (Although in Scotland, this is admittedly less dramatic – but more confusing – since men were in the habit of wearing skirt-like kilts anyway. Oh well…)

To Witches, Halloween is one of the four High Holidays, or Greater Sabbats, or cross-quarter days. Because it is the most important holiday of the year, it is sometimes called ‘THE Great Sabbat.’ It is an ironic fact that the newer, self-created Covens tend to use the older name of the holiday, Samhain, which they have discovered through modern research. While the older hereditary and traditional Covens often use the newer name, Halloween, which has been handed down through oral tradition within their Coven. (This is often holds true for the names of the other holidays, as well. One may often get an indication of a Coven’s antiquity by noting what names it uses for the holidays.)

With such an important holiday, Witches often hold two distinct celebrations. First, a large Halloween party for non-Craft friends, often held on the previous weekend. And second, a Coven ritual held on Halloween night itself, late enough so as not to be interrupted by trick-or-treaters. If the rituals are performed properly, there is often the feeling of invisible friends taking part in the rites. Another date which may be utilized in planning celebrations is the actual cross-quarter day, or Old Halloween, or Halloween O.S. (Old Style). This occurs when the sun has reached 15 degrees Scorpio, an astrological ‘power point’ symbolized by the Eagle. This year (1988), the date is November 6th at 10:55 pm CST, with the celebration beginning at sunset. Interestingly, this date (Old Halloween) was also appropriated by the Church as the holiday of Martinmas.

Of all the Witchcraft holidays, Halloween is the only one that still boasts anything near to popular celebration. Even though it is typically relegated to children (and the young-at-heart) and observed as an evening affair only, many of its traditions are firmly rooted in Paganism. Interestingly, some schools have recently attempted to abolish Halloween parties on the grounds that it violates the separation of state and religion. Speaking as a Pagan, I would be saddened by the success of this move, but as a supporter of the concept of religion-free public education, I fear I must concede the point. Nonetheless, it seems only right that there SHOULD be one night of the year when our minds are turned toward thoughts of the supernatural. A night when both Pagans and non-Pagans may ponder the mysteries of the Otherworld and its inhabitants. And if you are one of them, may all your jack-o’lanterns burn bright on this All Hallow’s Eve.”