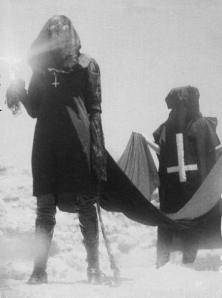 This post, submitted by one of my readers (whose girlfriend is the author), explains that “By saying theistic Satanists are not “real Satanists”, the Church of Satan is creating a distinctly Satanic religious identity not in opposition to American society, but in opposition to those “proximate others” who are too ideologically close for comfort, which might threaten their position in America’s religious landscape.””  The subject of the paper focuses specifically on the Church of Satan; however, this notion of opposing “proximate others” prevails throughout all rungs of Satanic culture.  Prominent theistic Satanic groups, such as the Order of Nine Angles and the Joy of Satan Ministries, are as violent in their opposition of LaVeyan Satanism as they are against mainstream religious disciplines, for exactly the same reason — within the Satanic subculture, the Church of Satan is “mainstream.”

In my opinion, this is not an integral failing within either discipline’s theology, philosophy or metaphysics; upon closer scrutiny, many well-read Satanists agree they espouse the same ultimate message, regardless of the differing spiritual (or lack thereof) trappings.  This is indicative of an integral human failing.  Becoming the assumed majority opinion in any cross-reference of society seems to breed an attitude of “us vs. them” — and if acceptance is finally reached within the larger-scale community regarding the veracity of one’s claims, the vitriol turns inward to any who would “jeopardize” their new-found validity.  But at what cost?

If you ask those of us, like myself, who don’t wish to fit into any mold — who wish to embrace the essence of Satan as complete lack of convention, tradition, or hierarchy — it means accepting group identity at the cost of your principles, or consigning yourself to solitary practitionership forever.

There is another way.

I call it “Satanic unitarianism” (although a more advertising-friendly tagline has been suggested: ‘orgiastic Satanism’).  It is based on two simple premises:

1. No one group of Satanism is any better or worse than any other.  Upon closer examination, every group has its failings, its shortcomings, and its skeletons in the closet — some over, some subtle; some tolerable, some harder to swallow.  That is why Satanists are implored to accept no one’s authority as the “one true path;” it is a self-defense mechanism against indoctrination and stagnancy of thought.

2. Every Satanic group has something of value to contribute.  Yes — I do mean EVERY group.  That means even the ones you can’t stand, that make your gut turn, that disagree so strongly with your principles that you have a hard time thinking about it without getting angry.  That means even the ones inundated with Nazi iconography, even the ones saturated in Judeo-Christian themes, and yes, even the ones that reject the principles of magick.  Satanism isn’t about compartmentalizing things into easy-to-process chunks; it’s the difficult but all-important revelation that simplicity of any kind is an illusion, and if you think something’s simple, you haven’t examined it hard enough — or talked to enough people about it.

Not everyone is cut out for that kind of daily mental exertion.  Even people who find it fun and interesting also admit it is draining and difficult!  But I believe it can be taught.  I believe, given an atmosphere supportive and open-minded of new ideas, burgeoning Satanists aloofly guided by these principles will breathe new life into us.

These principles are what the blog, the page, and my Satanic faith are based primarily upon.  Based on the blog and it’s accompanying Facebook page’s growing following (and even the vitriol from its dissent) I can tell I’m not alone, and the idea has traction.  So I propose that people who agree with the principles I have just stated, and who are interested in hearing from all sides of the Satanic debate — rather than engaging in the regrettable feedback loops that so often occur when claims are made in a vacuum — should come together under the banner of Satanic unitarianism.  Join the debates on our Facebook page, distribute the learning material, and most importantly of all, be supportive of all your Satanic brothers and sisters, no matter what path they follow.