Tara the Windy Liberator, the Mother, the Activity Heroine: “Green Tara functions throughout our world” the activity of all the Enlightened Ones

Green Tara is famous for her windy activity — faster than the fiercest hurricane — sweeping to the rescue of sentient beings. In Vajrayana Buddhism, Female Buddhas represent Wisdom. Tara represents the unique and awesome intersection of Activity and Wisdom.

Wisdom, without applying it in action, is just philosophy. Activity, without wisdom, is just volatile power. 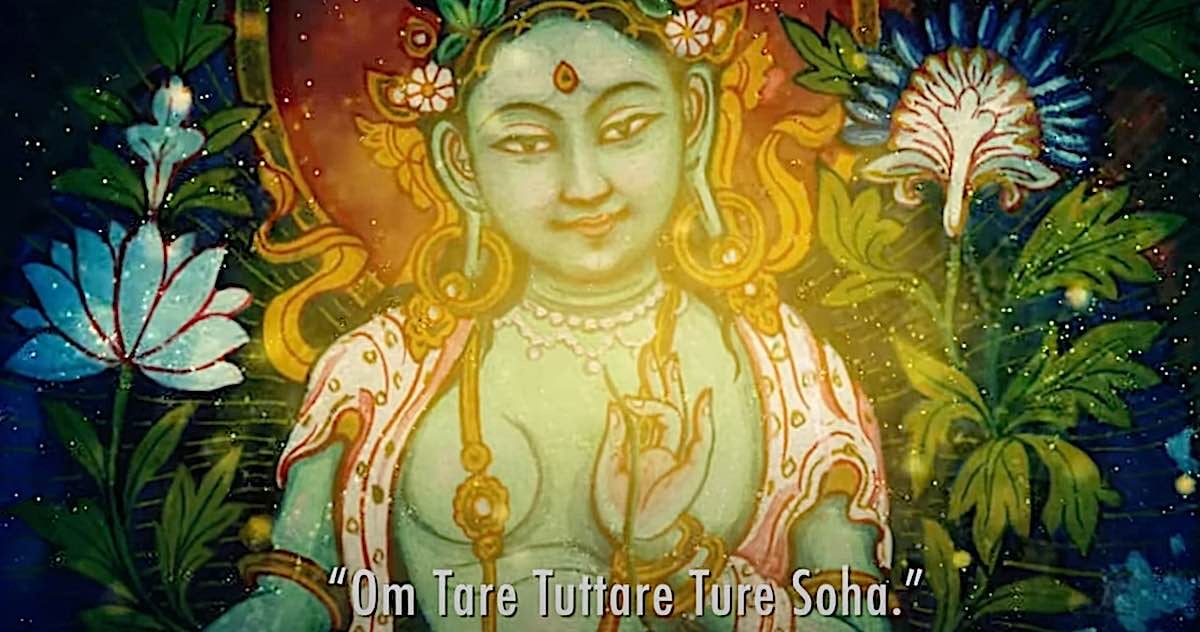 Green Tara of the Khaidira forest is green like her forest and her Pureland. She is the activity of all the Buddhas. Saying her mantra calls on her compassionate, loving activity. Om Tare Tuttare Ture Svaha. See a video with chant along subtitles below. (Second video, or go to the first video towards the end of the meditation).

Tara is for everyone

There’s an old saying that you don’t have to be Buddhist to ask for Tara’s help. So, Tara is really for everyone.

Tara is also, however, the yidam of most of the very great teachers in Tibetan Buddhism, and if not their Yidam, certainly they practice here for activity wisdom. Gelek Rimpoche wrote (who is writing as a Gelugpa tradition teacher):

“Tara is a very, very special yidam particularly for the Kadampa tradition. Almost every great teacher in this tradition has Tara as their most important yidam. Many of them, more or less everybody, have practiced longevity through Tara, including the first Dalai Lama, Gendun Drup, and Gendun Sönam Gyatso and also the Panchen Lamas. Tara is considered to be a very special yidam of the Ganden Kagyu tradition, which means the Gelugpa tradition.”

Tara, however, is equally celebrated as a yidam in all of the major Tibetan Buddhist traditions. Tara is for everyone! And, not just humans. [See Tara the Environmentalist below.]

Tara is the Karma Dakini

Her role, as the “activity aspect of all the Buddhas,” is as vast as the universe. She is the “Karma” Dakini — the Dakini of the Karma family of activity. This is why her many activity roles include rescuer, protector, and countless other activity roles associated with Karma. Karma, literally, translates as activity and cause-effect. We see the results of humankind’s karma — exploitation of the world’s resources — in changing weather systems. We see the results of our own personal karmas in our own lives. A moment of anger can result in endless suffering — lost friendships, relationships, jobs — or even more serious repercussions. Anger, swelling into rage, has triggered wars and suffering throughout history. 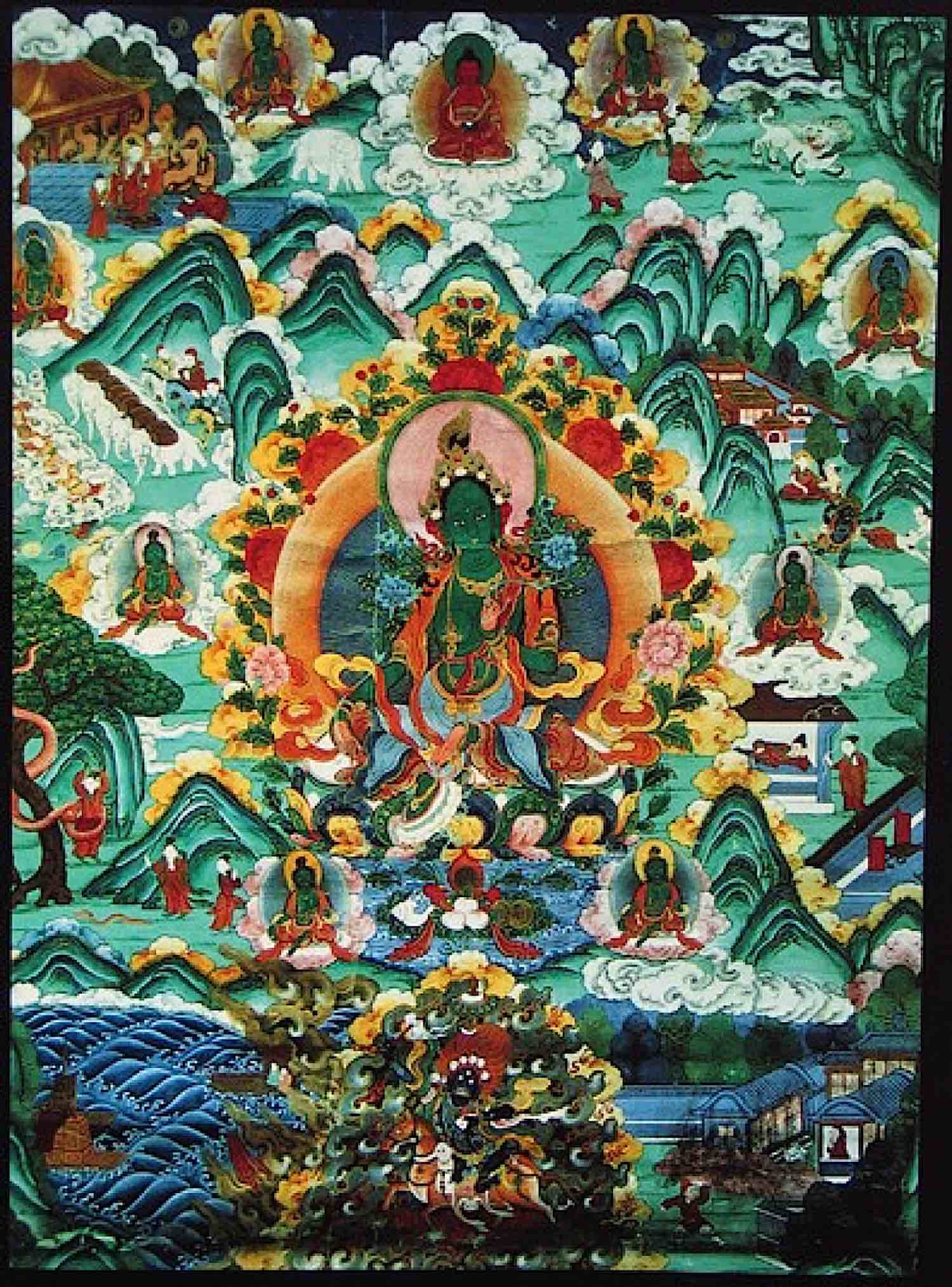 Never fear, Tara is near

“The feminine energy is sort of comfortable energy, and also, so kind and very forgiving. No matter how many mistakes we keep on making, they don’t get easily annoyed. Tara is also known as quick (Tib: nyur ma), the quick functioning heroine. In particular, Tara protects from the eight fears. These are emotional fears, but the metaphors of forest fires and animals and elements and so on are used. In the stories, very often someone is frightened by a snake or tiger or elephant or thief, and then suddenly you find Tara appearing there, protecting the individuals in this way or that. In these stories, she appears almost like Xena.” 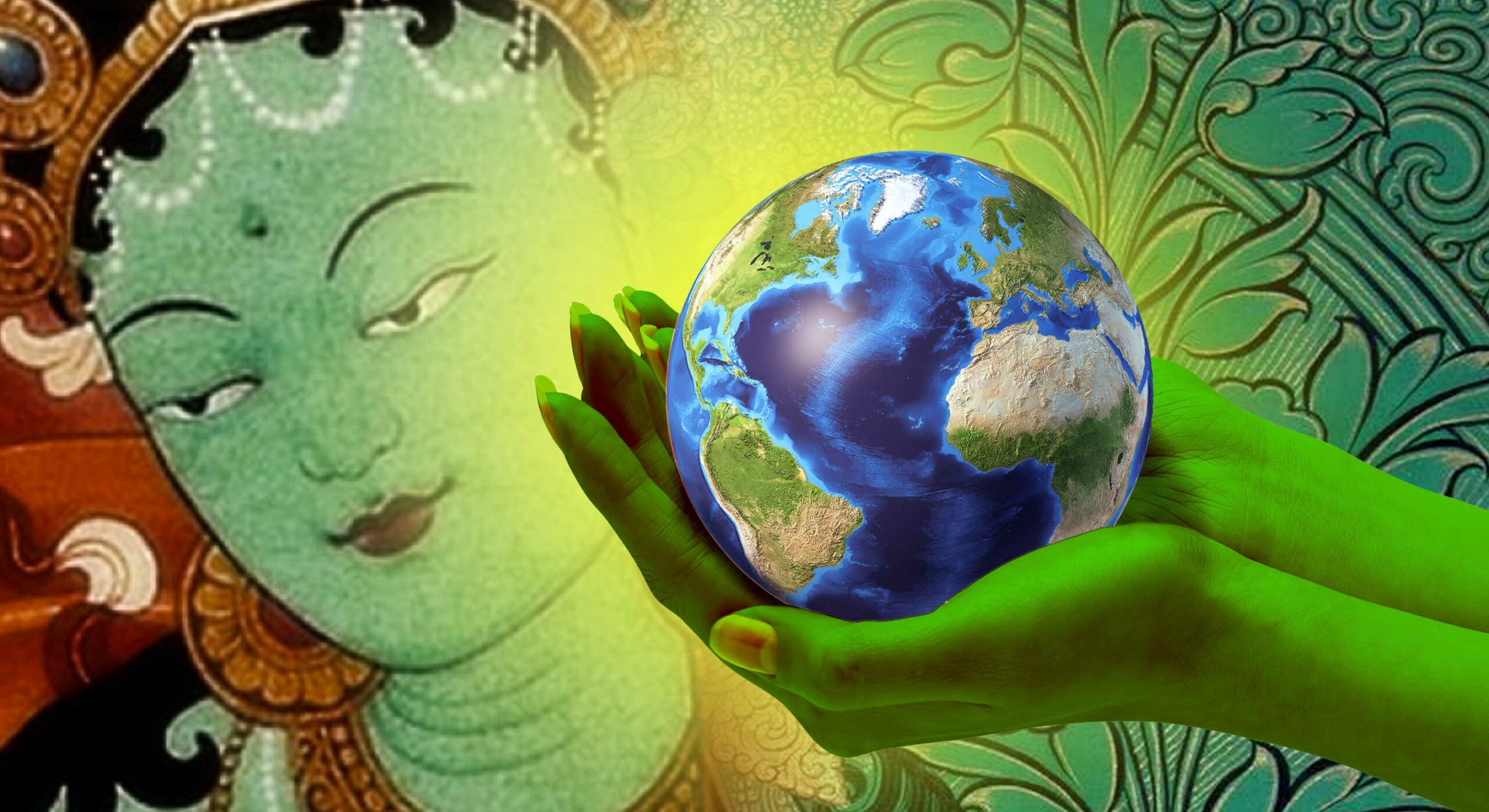 A composite feature image from Buddha Weekly illustrated Tara’s green hands cradling the Earth. Tara is the loving mother who protects all beings and Mother Earth herself.

Why Tara is associated with activity

Each of the Buddha families are associated with elements as symbols of their special focus. Although all Buddhas have the same fully Enlightened minds, the Buddha Families remind us of the different aspects we should focus on in practice. In the case of Tara, She is the Wisdom Mother of the Wind or Air element — with the associated symbolism, such as “Chi”, “Prajna” and “internal wind or lung.”

“The strongest element on which we base life is air, not ground, not earth. That is because air is the basis of the nature of sound. Really, it is. That is why air is the strongest out of four elements, which are earth, water, fire, and air. Air is the very base.” 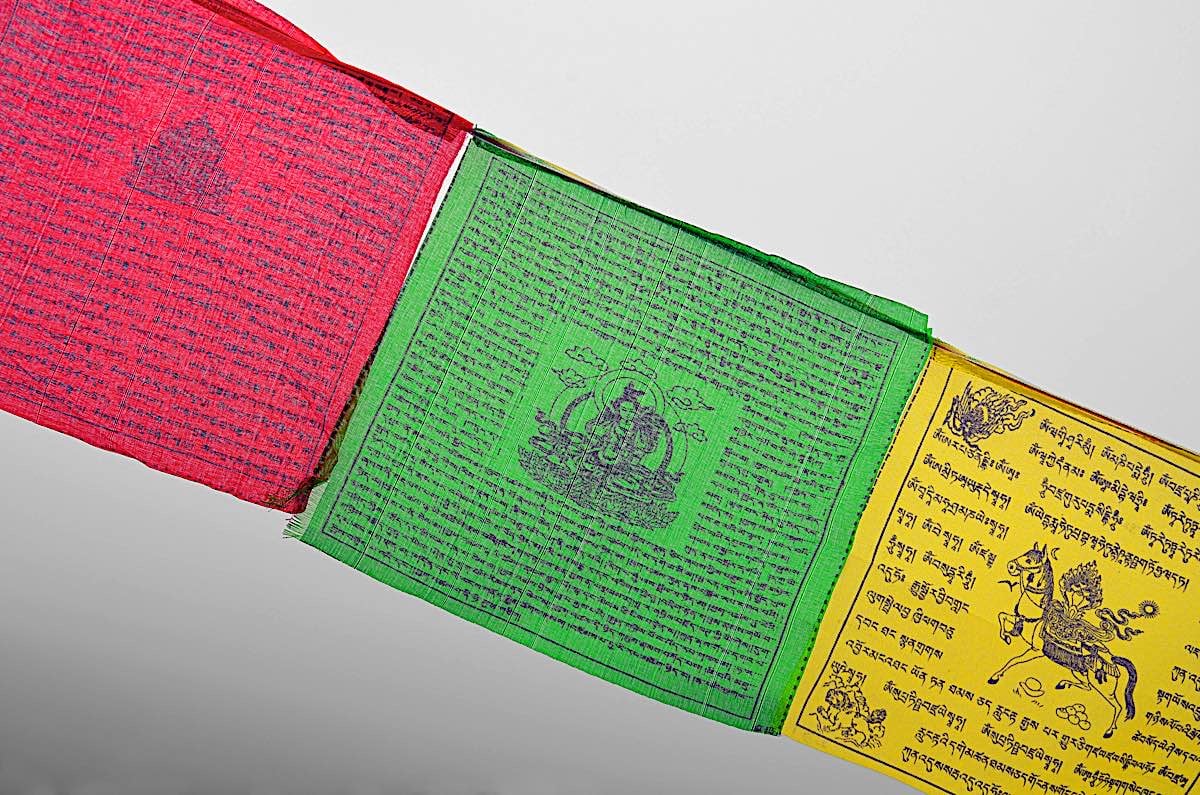 Wind activity is associated with Tara. Her prayer flag (green flag) with her image and praises symbolically carries her blessings on the wind to all beings. Wind symbolizes her activity power. She is the “activity of all the Buddhas” — compassionate, loving, kind energy. The yellow flag on the right shows a wish-fulfilling wind-horse also associated with Tara’s family.

The 21 Taras are only the beginning of her countless manifestations. Tara is so tireless, she is constantly appearing in her many forms to help. Gelek Rimpoche teaches[1],

Video with beautiful English chanting of the Praise to the 21 Taras — which devout Tibetan Buddhists chant every morning:

If that seems a “stretch” in our doubting minds, it’s important to remember that Tara works through all of us. We all have Buddha Nature. All Beings have Buddha Nature. Praying to Tara for help doesn’t mean she’ll show up as a Green goddess, shimmering in the air in front of you. Her help might come in the form of hard-working first-responders. She is, remembers, the karma activity Buddha. The first responders will show up in time if it’s “in our karma” as some teachers say. For those, with faith, Tara always helps in the best way possible for our greater good.

The face of the glorious Buddha Tara in her Green Chittamani form by Ben Christian (Jampay Dorje). For an artist profile and interview of Jampay Dorje (Ben Christian) see this feature>> To see more of his art visit JampayDorje.com>>

Much more than just a rescuer

She is much more than a rescuer. Every activity of the Buddhas and Bodhisattvas — compassionate and wisdom activities: peaceful, increasing, powerful, wrathful — is handled by aspects of Tara. Whether as Green Tara, 21 Taras, 108 Taras, She is ready to sweep into action.

Her activity isn’t just for the benefit of humans, but for all sentient beings, both seen and unseen. She is the ultimate “environmentalist” caring and protecting for Mother Earth as well — especially in her role as Tara of the Khaidira Fragrant Forest. 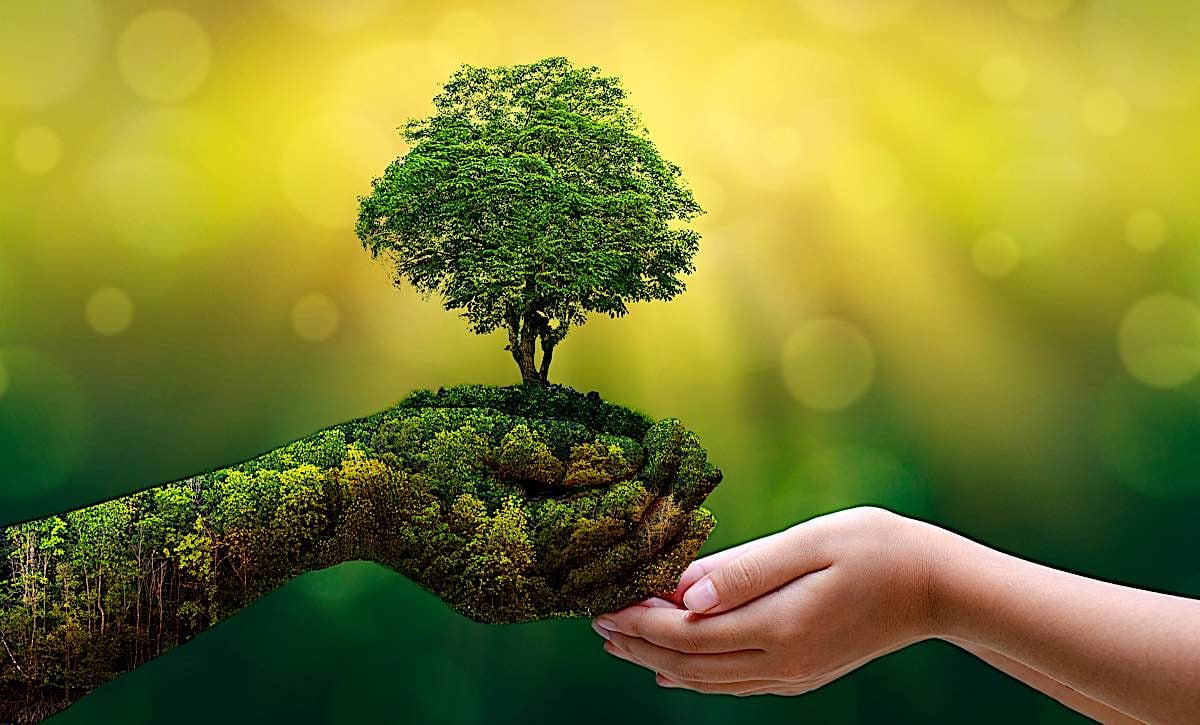 Tara’s green hands reaching out to you. Tara is green as a symbol of her Enlightened activity protecting and nourishing the world and all sentient beings.

Tara is not just the rescuer of humans in peril, but also the protector of animals and the environment. In her Tara of the Khaidira Fragrant Forest form, she protects plants and animals — and all beings — from harm.

“Green Tara could inspire the environmental movement with her many aspects that focus on the natural world. As we continue to face challenges presented by climate change, Green Tara could be a powerful force for change.” [2] — The Rubin Museum of Art

Green Tara detail from a 21 Taras thangka by Angeli Lhadripa Shkonda. For a previous feature on this artist and this painting, see>>

Whether you view that help as an example set for our own conduct, or as her active help in the world, it is clear that she is the go-to for compassionate activity in our world.

Green Tara is one of the most revered Goddesses in Buddhism, not just for her role as a rescuer and protector but also for her profound connection to the natural world. As an environmentalist, Green Tara embodies all of our efforts to protect and preserve nature, and she can play an important role in the fight against climate change. Whether through action or wisdom alone, Green Tara’s presence promises hope for a better future for all beings on Earth.

Even Tara’s Pureland is a wilderness of beauty, known as the Turquoise Pureland. 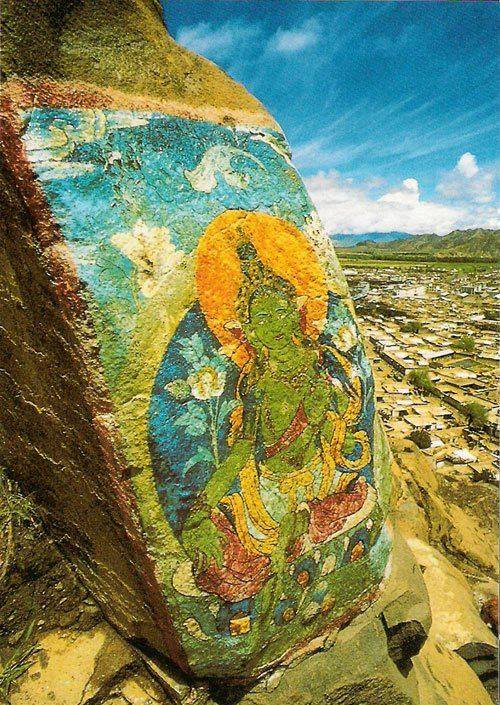 Tara painted on a cliffside on a mountain overlooking a village in Tibet, her protective loving gaze watching over them.

How to ask Tara for help

There’s an old story of a devoted person who cried out in a time of need, “Tara, how could you abandon me?” Tara said to her, “How can I abandon that which I am?”

Basically, just ask for help with faith and devotion.

One empowering method is to chant her heart mantra in Sanskrit:

Chant along with Yoko Dharma in this beautiful video with visualized Tara images:

Tara uses your own hands?

Don’t just pray and hope for the best, of course. If you need help, get help. If you can help yourself, help yourself. Tara does her best work through your hands — including compassionate activities helping others. Green Tara is often seen depicted in paintings as having two hands with palms up, standing on one leg. Some teachers explain this as Green Tara using your own hands to help you through a difficult situation.

Whether Green Tara appears as an image in your mind or a human rescuer comes to the rescue, it’s clear that she is the compassionate and wise force behind all of our activity — from first aid to environmental protection, Green Tara is always acting for the benefit of all beings. With faith and devotion, we can ask for her assistance in times of need and offer our own actions to support her work throughout the world.

Do you believe in Green Tara? How might Green Tara inspire us to take action on climate change, or protect animals and the environment? Let us know in the comments!

Green Tara is one of the most revered Goddesses in Buddhism, not just for her role as a rescuer and protector but also for her profound connection to the natural world. As an environmentalist, Green Tara embodies all of our efforts to protect and preserve nature, and she can play an important role in the fight against climate change. Whether through action or wisdom alone, Green Tara’s presence promises hope for a better future for all beings on Earth.