“We are extraordinarily adept at taking refuge, the problem is we take refuge in the wrong things.” writes noted Buddhist teacher and psychologist Rob Preece, in his breakthrough book, Preparing for Tantra. [1]

Rob Preece explains what he means by “wrong things”: “We take refuge from our stress, our emotional problems, and our relationships in anything we find that will temporarily relieve us of discomfort… We take refuge in food, money, our home, the TV, entertainment, alcohol, drugs, sex, even work and relationships… [we] think, albeit mistakenly, these things will bring us happiness… they have become a refuge.”

Dalai Lama: “it is senseless to ask another who is in the same predicament”

Why take refuge in the Three Jewels instead of something worldly? The Dalai Lama explains: “… it would be like falling into a ditch and asking another who is in it to help you out. You need to ask someone who is standing outside the ditch for help; it is senseless to ask another who is in the same predicament. A refuge capable of protecting from the frights of manifold sufferings cannot also be bound in this suffering but must be free and unflawed.”  [6] 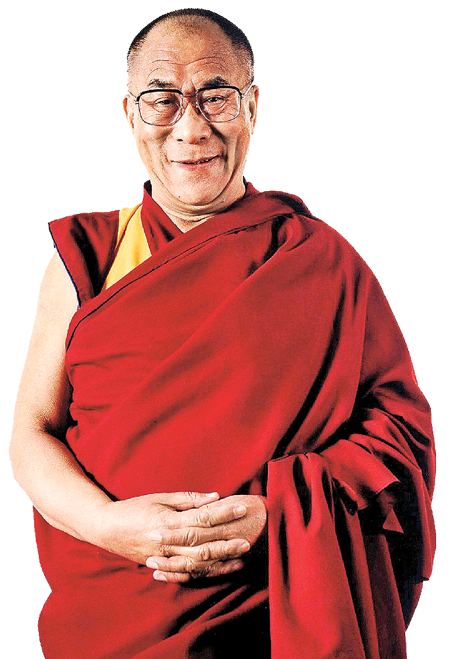 “It should be understood that the taking of refuge is not a process whereby the Buddha takes those who appear to have devotion to him and leads them to his side. Through taking refuge, one begins a process oneself which, going through various stages, will lead to one’s own realization of the same state, the same experience as the Buddha.” [6]

“We talk about the Three Jewels. They are actually contained within your mind. Your inner Buddha is your wisdom awareness, your inner Dharma is love and compassion. Although the Buddha taught 84,000 different Dharma teachings, their essence is love. If you give rise to love, wisdom awareness will naturally arise… If you abandon the causes of suffering then there is no basis of suffering.“ [6]

Beautiful chanting in Tibetan and English of Refuge in the Three Jewels and the Four Immeasurables by Yoko Dharma:

Venerable Zasep Rinpoche: Refuge should be in something meaningful

Venerable Zasep Rinpoche cautioned: “Taking refuge practice can be refuge in any object,” not necessarily the traditional Buddha, Dharma, Sangha refuge. He explained, however, that that type of refuge is not a Buddhist Refuge.

Buddhist refuge, in the Three Jewels can “help us to heal and remove obstacles in our lives. It teaches us to turn these obstacles and challenges into objects of practice.”

To Buddhists, we take meaningful refuge in Buddha, Dharma and Sangha. In a teaching on Ngondro, Zasep Rinpoche pointed out that taking Refuge in the 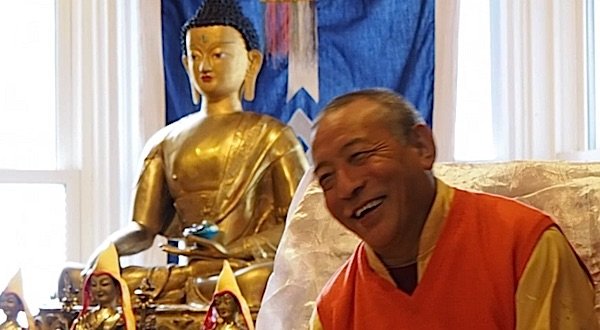 Spiritual Director Venerable Zasep Tulku Rinpoche. Born in eastern Tibet in 1948, Zasep Rinpoche was enthroned as the Thirteen Zasep Tulku (incarnation) at Zuru Monastery at the age of five. He is Spiritual Director at centres in Canada, USA, Australia and annually teaches in Mongolia and other countries.

Three Jewels is an important practice especially today. “In the modern world, there isn’t much time for Dharma practice.”  As a practice, Refuge reinforces most steps Buddha identified in the Noble Eightfold Path: 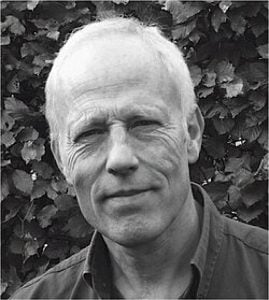 Rob Preece is a working psychologist, author of several books, and Buddhist teacher.

Taking refuge in the wrong things can be thought of as an addiction — in extreme cases. To relieve stress, many seek comfort in food, alcohol, or drugs. Preece writes, “It is disturbing that we are very often unaware that this is what we are doing until we take an honest look at our life and behavior… when our refuges fall apart and we realize how dependent on them we have become.”

This resonated with me. A friend of mine is going through a difficult divorce. She has sought various refuges — long phone calls with friends, diversions at the movies, a night out dancing — even though we “know it will not bring us happiness.”

Preece, a professional psychologist, explains why taking refuge in the Three Jewels can bring real comfort. “Many of us have realized that we do not need to constantly put so much energy into what are usually described as worldly concerns. We have probably made some attempt to turn our life around and are taking refuge in something we feel will bring us far deeper happiness, namely, the Dharma.”

But how does this work? Taking “safe direction” and refuge in the Buddha, Dharma and Sangha, “is turning around our life and no longer expecting external things to be able to bring us ultimate or lasting happiness. At the heart of Buddhism is the understanding that both suffering and happiness come from the mind. If we change the mind, then we can free ourselves from suffering and experience happiness.” 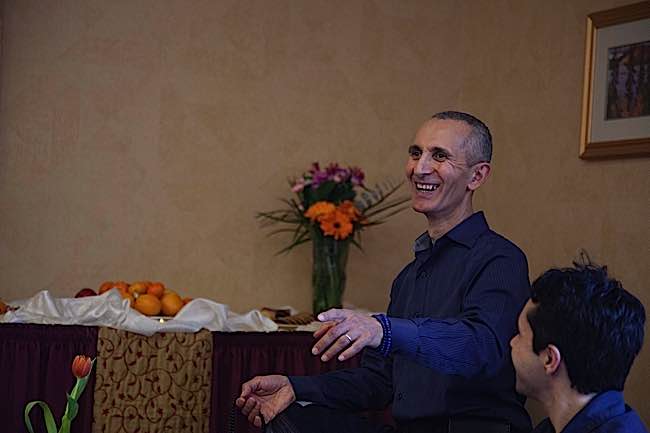 Theodore Tsaousidis teaches at Medicine Buddha Toronto and the Mindulness Centre of Grey Bruce. Photo during teachings on Mahamudra in Owen Sound 2015. 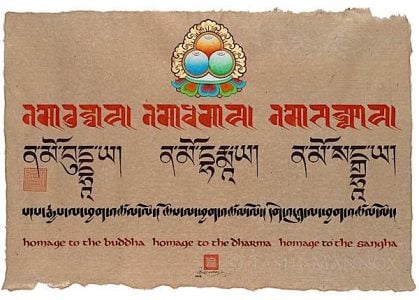 “The best medicine for what ills us and the world is Taking Refuge,” said teacher Theodore Tsaousidis of Medicine Buddha Toronto when asked to comment for this story. “It is easy to get lost in the noise of this world. Refuge is a kind of map to help us find our way home again when we have gotten lost. Refuge is an antidote.”

Theodore, who also teaches at the Mindfulness Centre Grey Bruce added, “Even when everything is going right its even more important the true meaning of taking refuge.”

Choje Akong Tulku Rinpoche: “Refuge guides you and protects you…”

Venerable Choje Rinpoche explained refuge this way: “I think it has great benefit because then you cannot be lazy; you cannot change your ideas all the time, “Today I like everything and everybody”, and you go round like a ray of sunshine! The next day you think, “Today I am fed up with everything and everybody and cannot be bothered”! I think the fact that you have taken Refuge guides you and protects you from negative emotions, from feeling negative about experiences. I cannot promise that you will always be able to achieve it – but taking Refuge will channel vour energy towards feeling positive, and I think that it will always be useful.” [2] 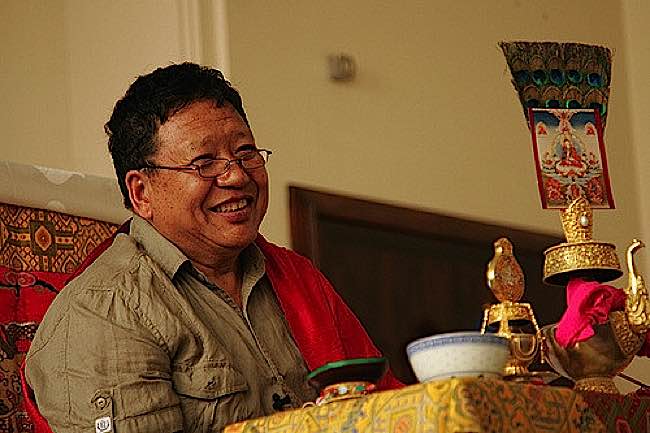 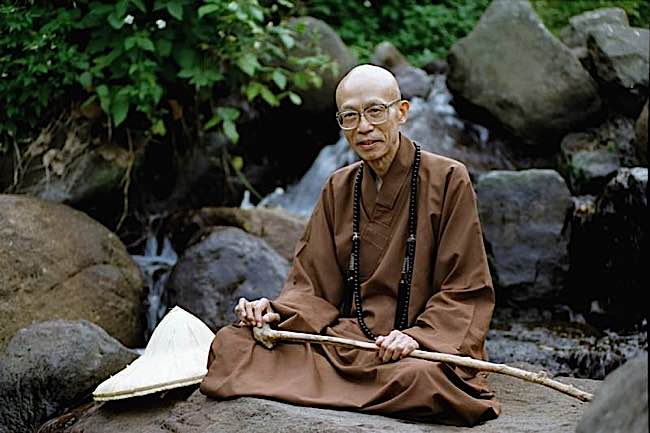 Ch’an Master Sheng-Yen: You take refuge in “Buddha nature … already inside you.”

Refuge is not always an “external refuge.” Chan Master Sheng-Yen explains: “The genuine Three Jewels, in essence, are none other than the enlightened Buddha Nature that is already inside of you.” Mahayana Buddhists believe that all sentient beings have Buddha Nature — that all beings can ultimately be liberated by this Nature. For example, the tradition of “prostration” and “Namaste,” is often said to carry the meaning “I bow to the Buddha Nature in you.” [3] 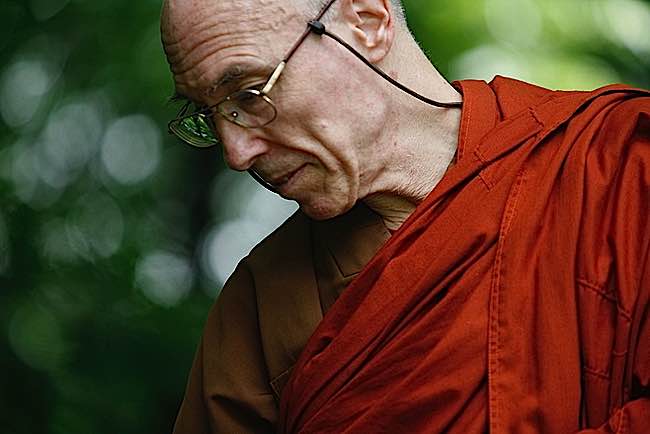 Bikkhu Bodhi: Refuge” the door of entrance to the Teaching of Buddha”

What are the Three Jewels, exactly? Noted Therevadan teacher Bikkhu Bodhi explained the practice of refuge in this context: “The door of entrance to the teaching of the Buddha is the going for refuge to the Triple Gem — that is, to the Buddha as the fully enlightened teacher, to the Dhamma as the truth taught by him, and to the Sangha as the community of his noble disciples.” 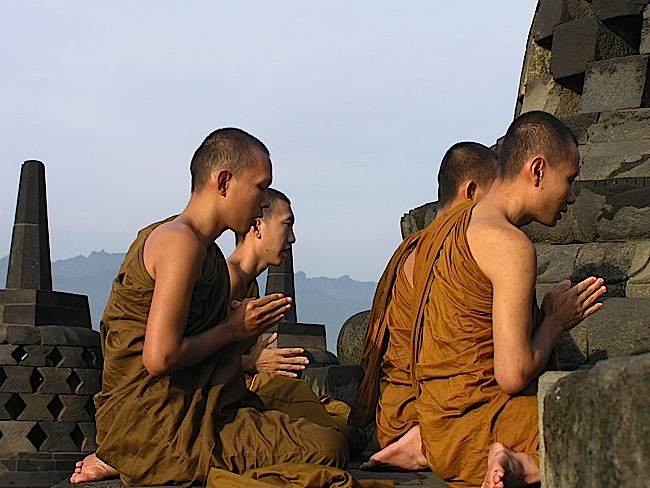 Prostrations can be full or partial, physical or visualized, a slight bow or a full body prostration.

Chogyam Trungpa Rinpoche: “We are committing ourselves to freedom”

“Taking refuge in the Buddha, the Dharma and the Sangha is something more than a ritual,” wrote Chogyam Trungpa Rinpoche. “By taking refuge we are committing ourselves to freedom.” [5]

Rinpoche distanced this concept from the idea of “allegiance” to “this and that.” He explained, “The purpose of taking refuge is to awaken from confusion and associate ourselves with wakefulness. Taking refuge is a matter of commitment and acceptance, and at the same time, of openness and freedom. By taking the refuge vow we commit ourselves to freedom.”

Pilgrims by the tens of thousands visit sacred historical places to prostrate and reinforce their Refuge.

Why is it so powerful? “We begin to see that in seeking security we can’t grasp onto anything; everything continually washes out and becomes shaky, constantly, all the time. And that is what is called life.”

Why is it important to make the commitment to freedom of the Buddhist path? “When we take refuge we commit ourselves to the Buddhist path. This is not only a simple but also an extremely economical approach. Henceforth we will be on the particular path that was strategized, designed, and well thought-out twenty-five hundred years ago by the Buddha and the followers of his teaching.” 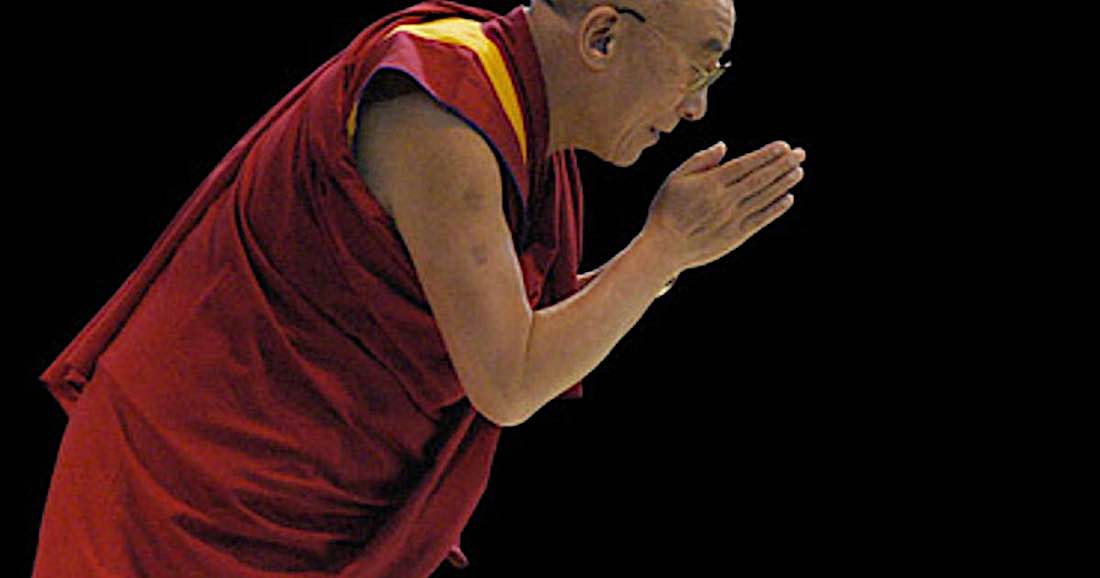 Another Benefit of Refuge: “Cutting the Ego”

In Tibetan Buddhism, Refuge and prostrations are often taught in Lojong training as methods of “cutting the ego.” Ego is often thought of as the root of attachment and suffering. The Lojong root text teaches “Contemplate that as long as you are too focused on self-importance and too caught up in thinking about how you are good or bad, you will experience suffering.” The preliminary trainings — especially refuge and prostrations — are key methods of “cutting the ego” which leads to attachments and suffering. [More here>>]

How to Take Refuge

At some point, a Buddhist will probably take formal refuge to signify a life commitment. Formal refuge normally involves making the vow in front of a Teacher of your lineage.

However, the commitment is not an onerous vow or promise, but a commitment to work for our own Enlightenment, with the help of Buddha, Dharma and Sangha, so that we may benefit all beings. 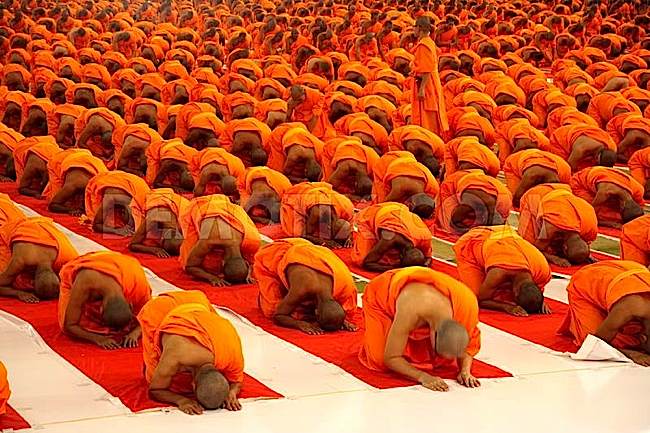 In formal refuge, we often will bow.

Many Buddhists, without any form of formal Refuge, speak their Refuge as a daily practice. Most Buddhist begin and end their day with a simple form of refuge. The simplest expression might be to prostrate or bow and say:

“I take refuge in the Three Jewels.”

Mahayana Buddhists will normally include the Bodhisattva compassion vow as well, making the shortest spoken refuge:

“I take Refuge in the Buddha, Dharma and Sangha. By the virtues of practicing generosity and other Perfections, may I attain Enlightenment to benefit all beings.”

In Tibetan Buddhism, often the Guru refuge is added:

“I take Refuge in the Guru, Buddha, Dharma and Sangha.” This is because the Dharma is taught via direct lineage through the Guru in those traditions. 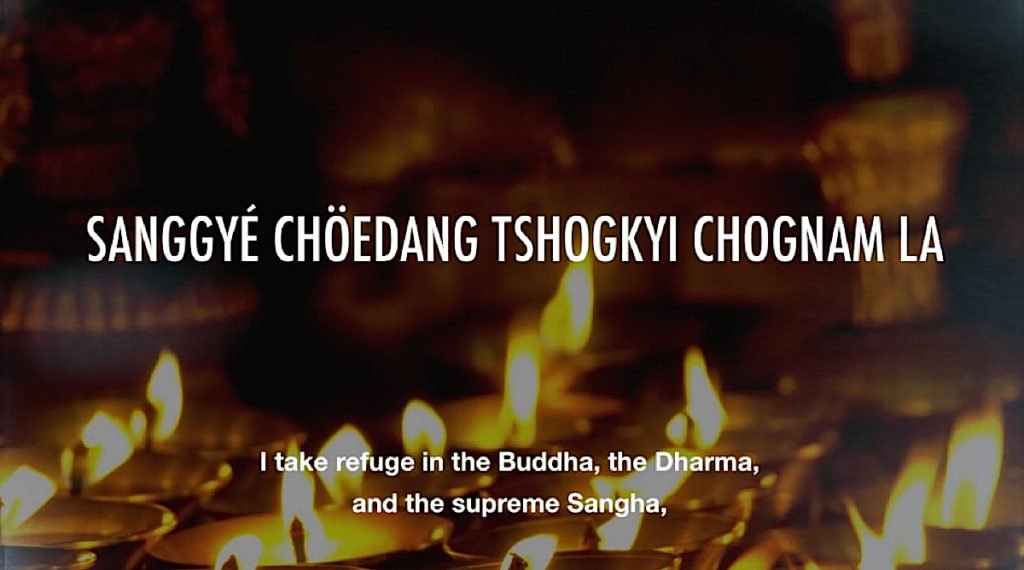 A slightly more elaborate form can turn the Refuge into a bit of a verse:

“I take Refuge in the Buddha

I take Refuge in the Dharma

I take Refuge in the Sangha

Until I reach Enlightenment.”

Refuge does not, of course, have to be spoken, nor is the bow or prostration required. The most important thing is to keep Refuge top of mind as we journey through life, knowing that we are guided by the teachings of Buddha.

[2] “The Meaning of Taking Refuge” by Choje Akong Tulku Rinpoche