The Litany of Dagon 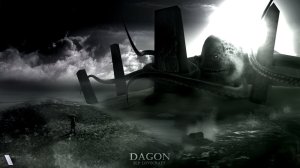 1 In his house at Ashdod lord Dagon lies fallen.
2 But he will be established in his Place again!
3 Dagon had fallen on his face to the ground before the ark of Yahweh.
4 For seven periods of time his worship was no more,
5 Seven times seven cycles of restriction.
6 Then the lords of Perfection assembled,
7 For the offering of a Great Sacrifice to Dagon their god,
8 And to rejoice: the Year of Jubilee.
9 And it shall come to pass in that time,
10 The sound of a cry from the Gate of the Fishes,
11 A howling from the second quarter,
12 And a great commotion from the hills.
13 The occurrence of a Great Sacrifice to Dagon,
14 And the Foulness of the place of Emptiness.
15 And the Priests of Dagon will come again:
16 The Sons of God will have intercourse with the daughters of Man.
17 And they took Dagon and they set him in his Place,
18 Re-establishing the ancient worship:
19 Bringing forth the Mighty Ones which are from Eternity.
20 All who enter the house of Dagon
21 Are under the seal that is Eleven.
22 And they shall adore the Head of Dagon,
23 Chanting with the voice of charmers,
24 As they leap across the threshold
25 In the silence of the night.
26 ba’bethu l’Ashdodu yaqom Baal-Dagon
27 In his house at Ashdod lord Dagon will rise!