The Spiritual Dimension of Freemasonry 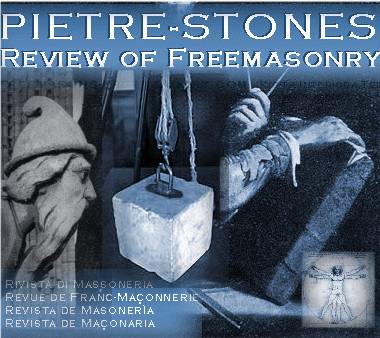 The above definition of spirituality is a useful introduction to the content of this paper for regardless of Obedience, I’ve always believed that Freemasonry
as a whole is mainly concerned with spirituality. Spirituality deals with the intangible, with the non-material, which is exactly what we do as freemasons at every temple meeting. We deal with the virtual, the symbolic, the intangible. We attempt to reach out to the GAOTU and to our own inner selves.

We make a conscious decision to improve our morals and to acknowledge the existence of something else aside from the material world:  belief in a Supreme Being is a requirement for entry in most  obediences and this immediately sets a spiritual tone in the whole process.

There are countless examples throughout the Craft degree ritual that demonstrate how important and key spirituality is to Freemasonry but I will limit myself to explore only the first degree.

In the first degree just before the lodge is opened the Chaplain or Worshipful Master will invoke the assistance of the GAOTU. Invocation can have different goals but one of them is to pray, i.e. to reach out to God. This doesn’t have to take a religious form (i.e. be a Revealed God or follow a prescribed religious format) but the act in itself certainly has a very strong spiritual content. After following the usual procedure, the WM declares the lodge as open in the name of the GAOTU.

This is followed by the opening hymn, which -like the Closing Hymn- is, in my opinion, more mystical than spiritual:

Hail Eternal! By Whose aid

All created things were made:

Heaven and Earth Thy vast design

May Our Work begun in Thee,

Ever blest with order be;

And may we, when labours cease

Part in harmony and peace

By Thy Glorious Majesty

By the trust we place in Thee;

So mote it be

The candidate for initiation is described as being in “a state of darkness” and although he is physically blindfolded, the darkness is meant of course in a symbolic way: he seeks Masonic light, he desires self improvement of a spiritual nature,
which is also moral, intellectual
and philosophical even. I personally believe in morality as something universal, all including which has its source in the Divine so again I believe that the candidate’s quest is of a spiritual nature.

But to continue with my brief journey through the first degree: once the WM is satisfied that the candidate is “of good report” and believes in a Supreme Being he proceeds with the first perambulation. Here, once again, the assistance of Heaven is called upon followed by a prayer (under the heading “prayer” in the monitor) and if prayer isn’t a spiritual act then I do not know what is.

The WM then mentions the mysteries and privileges of Ancient freemasonry- the inclusion of the word “mystery” is, in my view, a wink to the Western mystery tradition which is spiritual in essence.  One of the Three Great Emblematical lights of Freemasonry is the Volume of the Sacred Law (whatever book this may be it will-undoubtedly- deal with spirituality). I could continue but for brevity’s sake, I shall go to the end of the first degree: the ceremony is closed with further prayers and allusions to a Supreme Being. As mentioned above, the other two degrees also have plenty to be said about them in terms of spirituality, the third degree in particular, with its references to mortality and the afterlife.

In my young Masonic career, I have noticed that there seems to be an obsession with rank amongst many freemasons. This seems to be the sole goal for many and although I think that awards and distinctions are a nice way of signifying commitment to the Craft I feel that these should not be the only
raison d’être for remaining in Freemasonry, otherwise we risk creating a kind of parallel dimension in which we replicate the professional and business world. I know that I am not the only voice that believes this. The ritual is what distinguishes us from other orders and organizations. Our principles state it clearly: Brotherly love, Relief and Truth. Rank is not mentioned anywhere (in fact it is as something negative in opposition to virtue and honour at the end of the EA obligation).

It seems to me that if the focus is solely on rank and hierarchical progression we lose track of Truth.  We cannot deny the fact that our ritual is full of spiritual references and compels us to reach out to God and to acquire self-knowledge and self-improvement. These are spiritual quests. Unless we really absorb the meaning of the ritual we will just be a club like any other with the sole difference of having some particular eccentricities, i.e. wearing aprons and sashes. Will we not be doing ourselves and the candidates that follow us a disservice by ignoring the spiritual dimension of Freemasonry? I somehow think this will be the case.

It would be more detrimental for us to see the spiritual elements of Freemasonry as religious. We know that Freemasonry is not a religion but I think it is fair to assume that for many people alien to freemasonry the inclusion of prayers, references to a Supreme Being and the mystical language employed in Masonic ritual leads them to believe that our order is a religious sect. This is true of some religious fundamentalist organizations that see us as a sect and a dangerous one at that-we have all read those rather absurd conspiracy theories.

Needless to say, we are not a religious sect or organization for a number of reasons the main ones being that we do not advocate any given religious faith and we do not offer sacraments nor a path to Salvation.

We are a secular organization but – I firmly believe- we are also a spiritual organization that most definitely deals with spirituality, self-knowledge and self-improvement.