Dakini Day, celebrated on the 25th day of each lunar month in Vajrayana Buddhist traditions, celebrates the feminine energy of wisdom. (DATES FOR 2022 Tsog updated below.)

Devoted Buddhists will celebrate with a Tsok (Tsog), a feast including food, singing, a group (or single) sadhana full of sound and celebration. The 10th is also celebrated with Daka Tsog to honor Guru Rinpoche and the Heroes (Dakas). Tsog is normally a commitment in higher yogic practices.

For a full story on “What is Tsog” see this feature>>

Important: Dakini day is Mother Tantra Tsog, on the 25th of the Lunar month.

Without contradiction to their role as exemplars of Emptiness, Dakinis can also represent fierce activities, such as protection (Green Tara and Palden Lhamo) — the ferocious protective love of a mother [For a story on Palden Lhamo, the female protector, view here>>].  Most Tibetan Buddhist temples and meditation centres try to arrange a monthly Tsog on this day each month, with celebrants bringing food as offerings. It is always a happy day, that invites blessings not only for the attendees, but for all sentient beings.

Padmasambhava described Dakinis as “the bestower of excellent blessings.” [3] 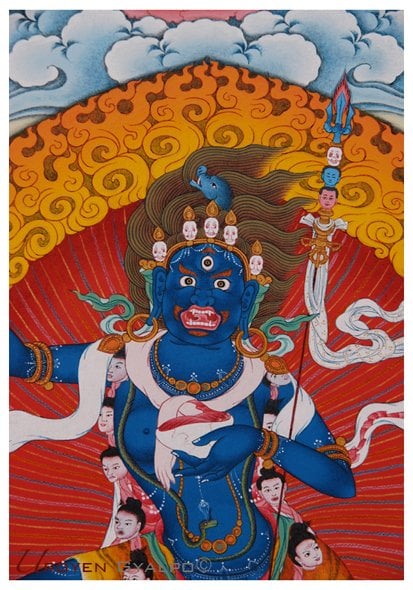 What is a Dakini?

The Dakini represents the divine feminine. (Khandroma in Tibetan, K’ung-hsing fo-mu in Chinese.) Dakini practices focus on Enlightened Feminine (although there are also some “unenlightened Dakinis”) — the Enlightened Dakinis such as Vajrayogini or Vajravarahi. Dakini can also refer to female sangha, teachers and students who might be exemplars of the path. 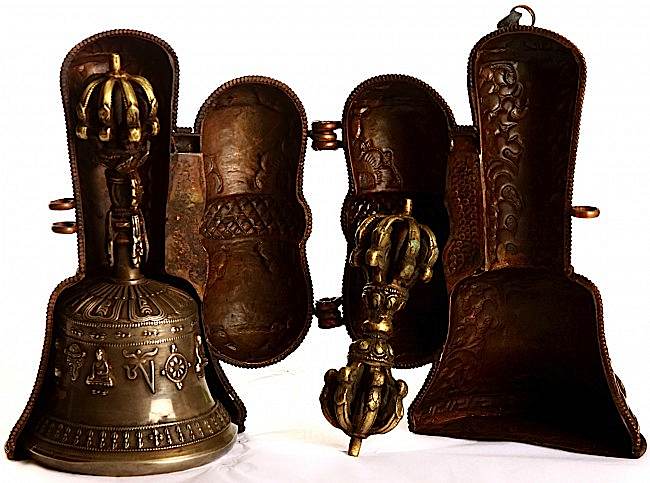 The Dakini is almost always an advanced practice, or Highest Yoga Tantra, largely because their practice explores the challenging notion of “Emptiness” (not be be confused with Nothingness. (For an article on Emptiness, see>>)

Padmasambhava, the great Eight Century Enlightened Yogi of Tibet, “reasoned that women are better equipped to realize the wisdom of the teachings…” [1]

Just as true wisdom is “elusive”, the female enlightened, in the form of Dakinis, is very “elusive and playful.” [1] Dakinis recognize that true wisdom does not come from intellectual debate and meditative contemplation alone. The elusive wisdom of Dakinis is the ultimate wisdom of Emptiness. 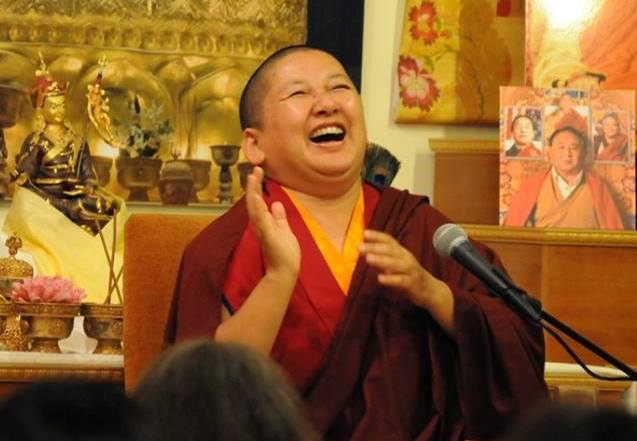 Khandro Rinpoche defines the authentic dakini principle as “a very sharp, brilliant wisdom mind that is uncompromising, honest, with a little bit of wrath.” [1]

Dakini’s have always been a part of Buddhism, starting with the Jataka’s (stories of Buddha’s former lives) in which “divine beings are described as travelling through the air. In Sanskrit, such a being is called a dakini, a term generally translated as “space-goer,” “celestial woman,” or “cloud fairy.”” [2]

Dakinis are typically thought of as the emanation of the “Enlightened Mind” understanding Emptiness. Another concept usually tied to Dakini practice is “bliss” — the state of blissful awareness of emptiness.

It is a wonderful experience to have a moment that realizes emptiness, a feeling of joy-bliss rather than “nothingness.” This is why Dakinis are often portrayed as active, dancing, joyful or fierce, naked and unencumbered. 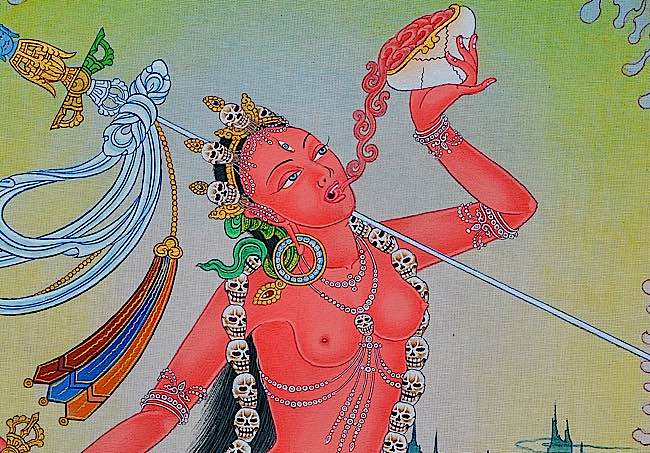 Vajrayogini (and Vajravarahi) is the “highest” manifestation of Dakini Wisdom. Here she is symbolically naked (freedom of wisdom), drinking nectar, with the male Heruka (compassion) khatanga on her shoulder. She dances to demonstrate the joy of realization and the activity of Dakinis. The skulls represent concepts such as impermanence. Red indicates magnetizing influence — and also the “speech” of the Buddha (Typically Body is white, Speech red, Mind blue). Vajrayogini, representing “wisdom of emptiness” can be practiced/portrayed/  visualized in union with compassion in the form of many Herukas, such as Chakrasamvara or the great Hayagriva (fierce manifestation of Chenrezig or Avalokiteshvara).

The Wisdom of Enlightenment

Wisdom, without Compassion, is not the path to Enlightenment, which is why, in Tantric Buddhism, Dakinis are often in union with male Herukas (Buddhas) — this symbolically demonstrates the union of Wisdom (Dakini) and Compassion (Heruka or “Hero”). This is symbolic, not literal — in other words not a sexual representation. It’s symbolically conveys you cannot have one without the other (wisdom without compassion, or compassion without wisdom) if your goal is to achieve Enlightenment for the benefit of all sentient beings. Also, that the union of wisdom and compassion bring bliss.

Nyingma master, Chagdud Tulku, explained, “Dakini refers to the feminine principle of wisdom that manifests in female form to benefit beings. We say the lama’s mind is the dakini because it embodies the inseparability of emptiness and wisdom, the absolute dakini. This absolute nature, dharmakaya, manifests as the subtle display of the samboghakaya dakini and the nirmanakhaya, or physical form of great female realization holders in order to benefit beings.” [2]

Dakinis can come in many forms, but are normally portrayed as active, playful and fierce. The notable exeptions are the many manifestations of Tara [Read more about Green Tara here>>]. Most enlightened Dakinis can be thought of as emanations of Tara — at the level of ultimate reality. Tara herself, in her many forms, can be thought of as a Dakini: 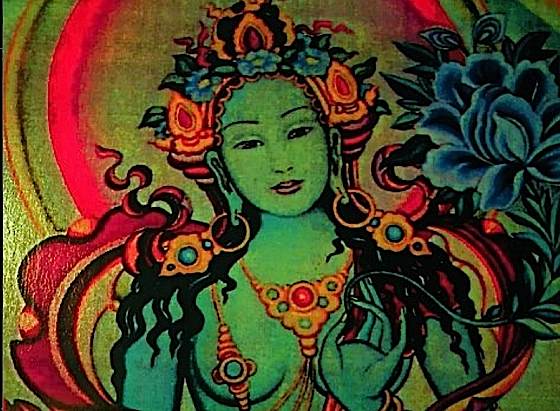 Tara, the most beloved of Female Buddhist Enlightened deities, represents wisdom in action.

The Four Classes the Four Empowerments

Padmasambhava taught there were “four classes of Dakinis, who are the Daknis of the four families of Vajra, Ratna, Padma, and Karma. They art spiritual beings who carry out the four activities of pacifying, increasing, magnetizing and subjugating.” Dakinis often are also visualized in advanced practices as giving the four empowerments: “the empowerments of vase, secret, wisdom knowledge and precious word.” [3]

Dakinis are also strongly associated with the great Mahasiddhas of India, particularly Vajrayogini. It is often said that all of the Mahasiddas relied on Dakinis. Also, most of the great Enlightened Yogis and Yoginis of India and Tibet practiced Dakinis. 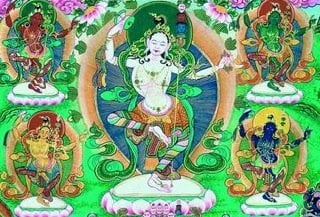 Dakinis and wrathful deities are important higher tantra practices in Vajrayana, and are the most likely to be misunderstood due to the symbolism.

There are, it is said, countless emanations of wisdom, although at the ultimate level, they are all one. Probably the best known Dakini is Vajrayogini. These practices do require a teacher and initiation, due to their profundity, but many Buddhists around the world attend Tsog (as spectators and to receive blessings) and Dakini public pujas as a blessing. Padmasambhava described the Dakini as the “bestower of excellent blessings.” [3].

Dakini mantras should not be recited without appropriate teachings and intimations, although many people will get started on the path to feminine wisdom with the practices and mantras of Tara, which do not require initiation:

In addition, some Buddhists who may not yet have initiation, might set up a statue or tangkha of a Dakini, especially Vajrayogini, and present offerings. A student does not have to be initiated to honour the wisdom of Enlightenment. Initiation is a step towards realizing that Emptiness. But the precursor to that is often doing the things that Dakini’s delight in:

It is said that you do not have to call to Dakinis. Because we all have Buddha Nature, we all have Dakini within. Dakinis manifest spontaneously in our lives when we perform pleasing acts of compassion, conduct ourselves ethically, and follow the precepts.