Video: 3 great Bodhisattvas Manjushri, Avalokiteshvara and Vajrapani — mantras and introduction: bring the wisdom, compassion & power of the 3 Lords into your life

What are the three key aspects of Buddhist Practice? What Bodhisattvas represent these key foundations in Buddhism? How can we bring them into our lives? In this Buddha Weekly video, we introduce the Three Lords of the World, Avalokiteshvara, Manjushri and Vajrapani, the Three Great Bodhisattvas. We also present their mantras, here chanted together beautifully by Hrishikesh Sonar:

What are the three key aspects of Buddhist Practice? What Bodhisattvas represent these key foundations in Buddhism? How can we bring them into our lives? In this Buddha Weekly video, we introduce the Three Lords of the World, Avalokiteshvara, Manjushri and Vajrapani, the Three Great Bodhisattvas. We also present their mantras, here chanted together beautifully by Hrishi.

Before we begin, if you enjoy this presentation, please like and subscribe to Buddha Weekly’s channel.
Please visit our popular Dharma website at BuddhaWeekly.com with its large library of free Buddhist features, articles, videos, and podcasts — covering all traditions of Buddhism.

A Sutra cover with embossed images of the Three Great Ones: Manjushri centre, Avalokiteshvara (our left) and Vajrapani (our right).

These great Bodhisattvas appear often in Sutra (Sutta, Pali), usually with folded hands, baring their shoulder to ask the Buddha an important question. Sometimes, they are the focus, as with Avalokiteshvara speaking (with Shakyamuni Buddha listening) to the Heart Sutra — one of the most important sutras in Mahayana Buddhism. Or, with Vajrapahni as the inquirer in the Maha Vairochana Sutra. 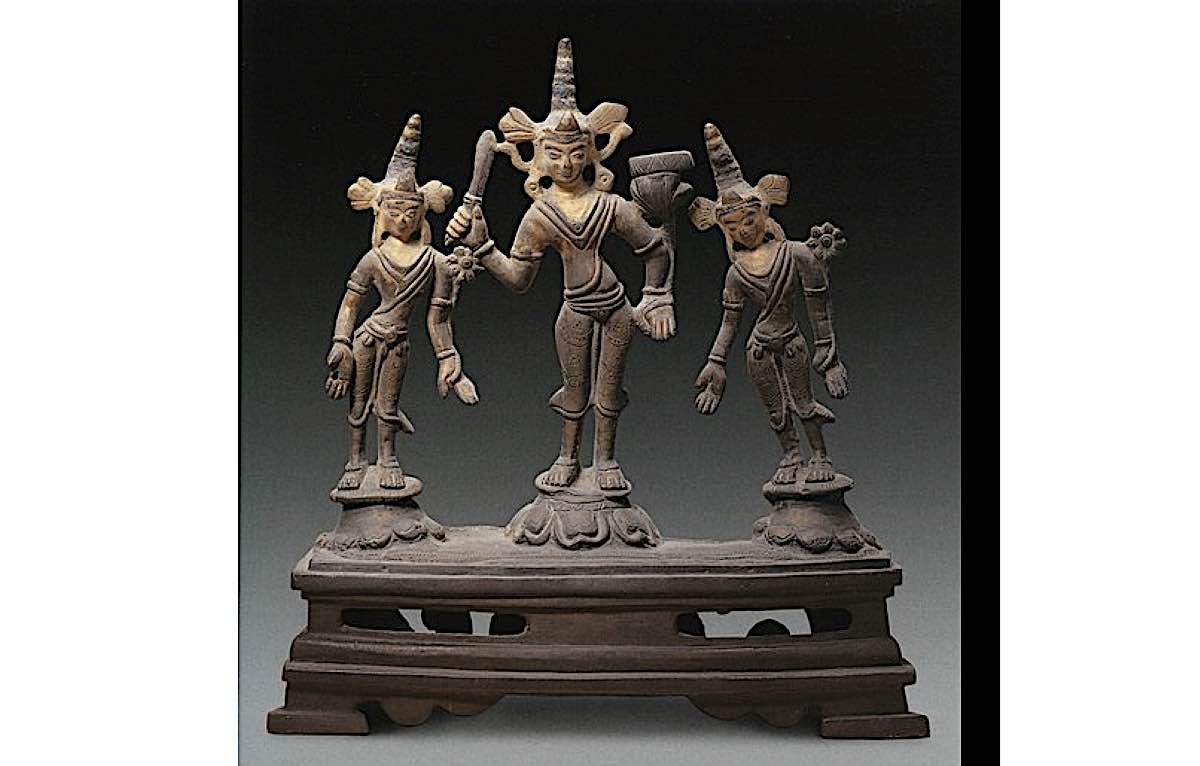 A classic antique statue of the Three Great Ones, with Manjushri in the Center. Himalayan Art.

Why these Three Out of the Eight Great Ones

In Buddhism, especially Mahayana, the three great Bodhisattvas, called the Three Lords of the World, are the most important practice. Why? Because they remain in our world, working to help us, and their focus is to empower wisdom and compassion.

There are Eight Great Bodhisattvas, traditionally, in Buddhism, but, in many temples and practices, the Three Lords of the World are preeminent. 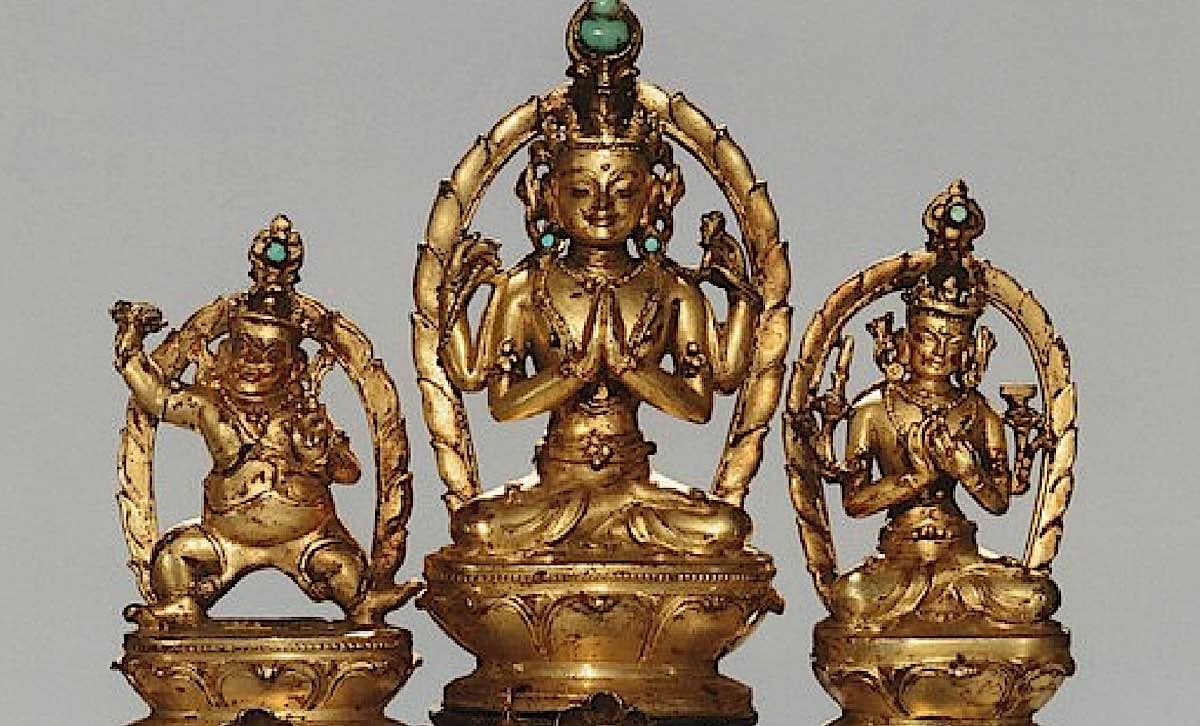 The Three Great Ones as a Single Statue for veneration. Himalayan Art collection.

Wisdom and Compassion — Plus One! 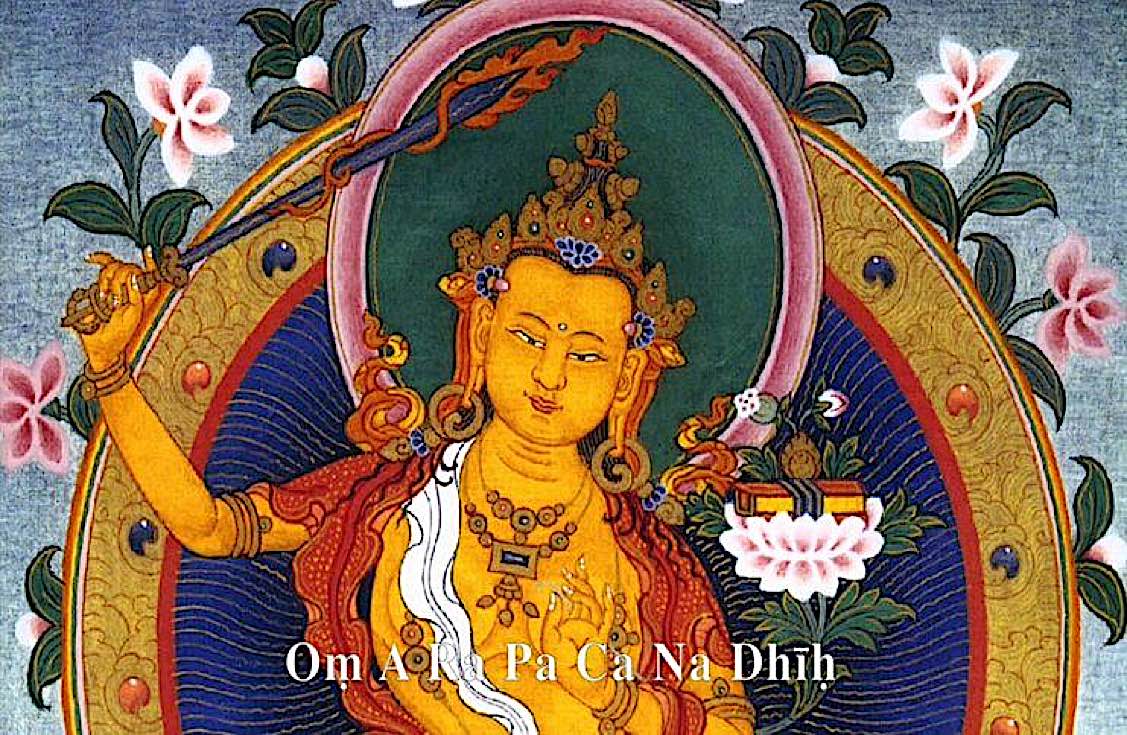 Manjushri is the Bodhisattva of Wisdom, the embodiment of all the Buddhas’ wisdom. He is often shown holding a sword in his right hand which cuts through conceptual delusions, and a lotus blossom in his left hand which represents the purity of his mind.
He is usually portrayed as a young prince, beautiful and serene, with golden skin. His name means “Gentle Glory”. 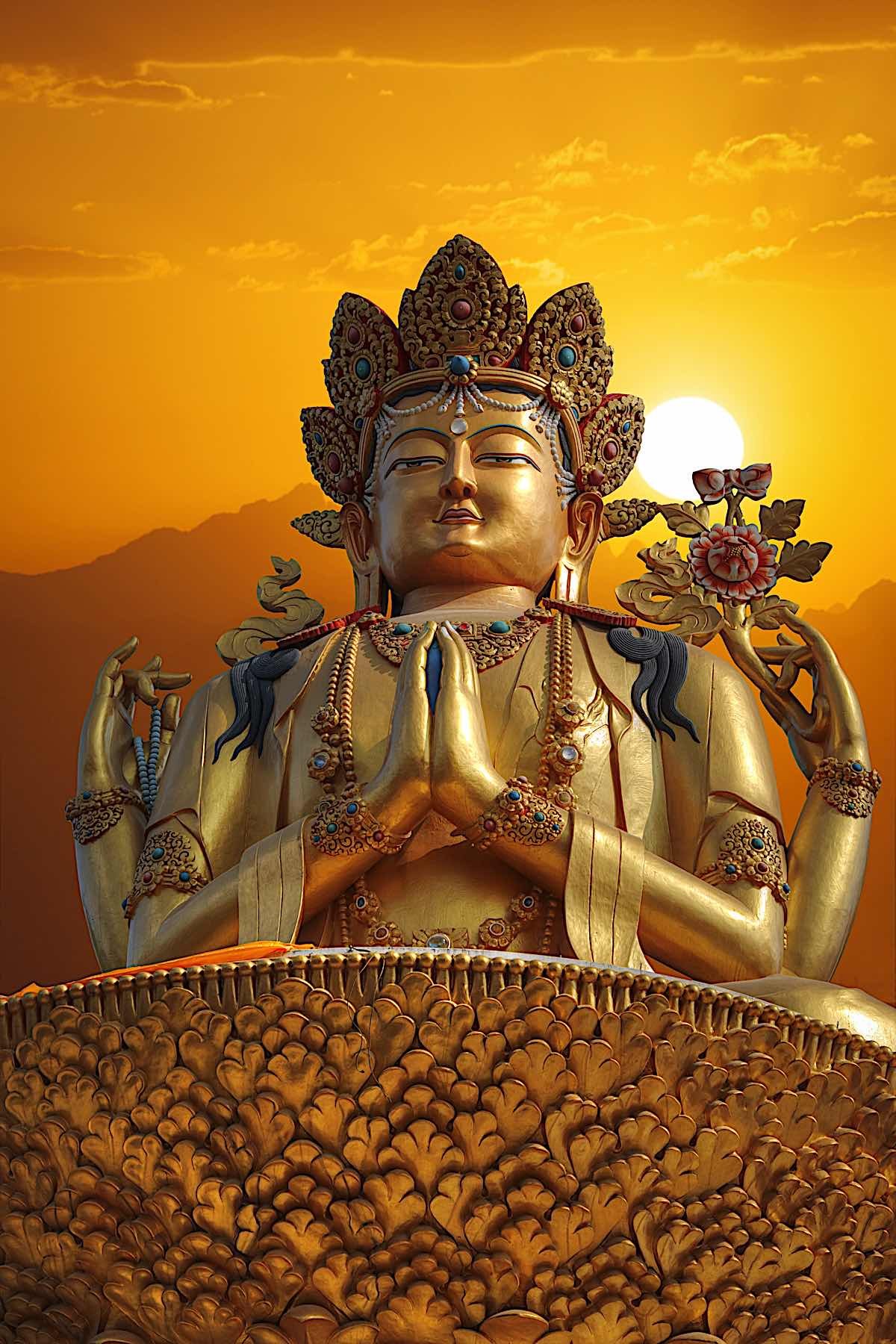 Four-armed Avalokiteshvara. The kindness of his face and his four arms — ready to reach out with compassion and love to protect and nurture — are the ultimate “Bodhisattva” hero ideal.

Avalokiteshvara (Chenrezig in Tibetan) is the Bodhisattva of compassion, and the patron deity of Tibet. He is often shown with eleven heads, representing his all-seeing wisdom, and a thousand hands, representing his ability to help all beings. In some countries, his compassionate appearance transforms into beautiful and compassionate Guan Yin or Kannon. As with all Enlightened Bodhisattvas, he can appear in countless forms, to symbolize his many activities.

His name means “Lord who Looks Down”. 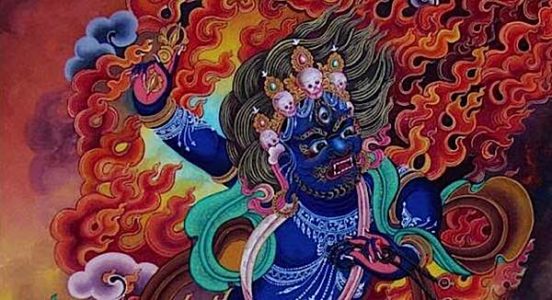 The fearsome power of great Vajrapani, who is always ready to “beat down” the obstacles to our practice.

Vajrapani is the Bodhisattva of Power, the embodiment of the power of all the Buddhas. He is often shown holding a vajra or thunderbolt in his right hand and a lotus blossom in his left.

He is usually portrayed as a muscular man, with dark blue or black skin, representing his power. His name means “Lord of the Vajra”. He also has a “wrathful form” where his face transforms into the angry face of an awesome Raksha being, his muscles bulge and he “hulks” up into the Incredible

Hulk aspect of the Bodhisattva of Power.

Together, the Three Lords of the World

Chant along now with the beautiful voice of Hrishikesh Sonar, as he chants each mantra seven times, then all three together one time each, then seven more of the three mantras.