Guru Rinpoche, the Buddha of Vajrayana

The Vajrayana Wheel of Buddhist Dharma that Guru Rinpoche brought to Tibet was more than simply another lineage of Buddhist philosophy. Vajrayana teachings, and especially Guru Rinpoche’s teachings and manifestations, framed a view of reality, of the Universe, more akin to Quantum Physics than religion.
Guru Rinpoche, the Lotus-Born, is honored as the second living Buddha of our age, who turned the final wheel of Dharma, Vajrayana, and brought Buddha Dharma to Tibet. He also embraced the miraculous and wonderous. 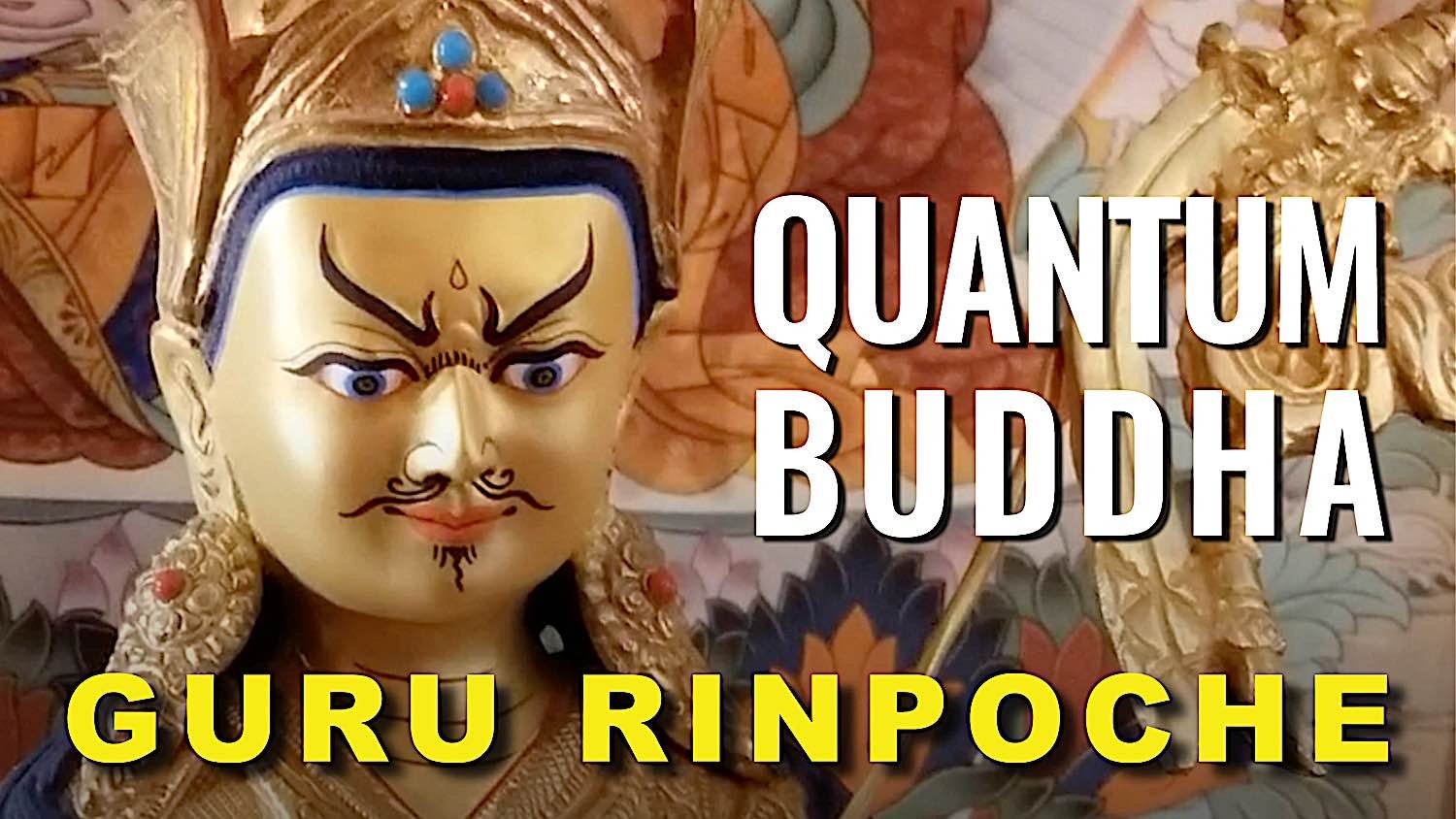 Statue of Guru Rinpoche with his fierce eyes, piercing gaze, so iconic of Vajrayana Buddhism.

Historically, Guru Rinpoche turned the final wheel of Dharma, popularizing the powerful methods of Buddhist Tantra. Traditionally, he is “Lotus Born” in Oddiyana. In the traditional, miraculous accounts he “consciously incarnated as an eight-year-old child appearing in a lotus blossom floating in Lake Dhanakosha, in the kingdom of Oddiyana.” He is the Lotus Born — born fully Enlightened.

“Scholars agree that Padmasambhava was a real person, that he came from Uddiyana, a kingdom possibly located around present-day Swat in Pakistan, and that he arrived in Tibet some time around the year 760.” 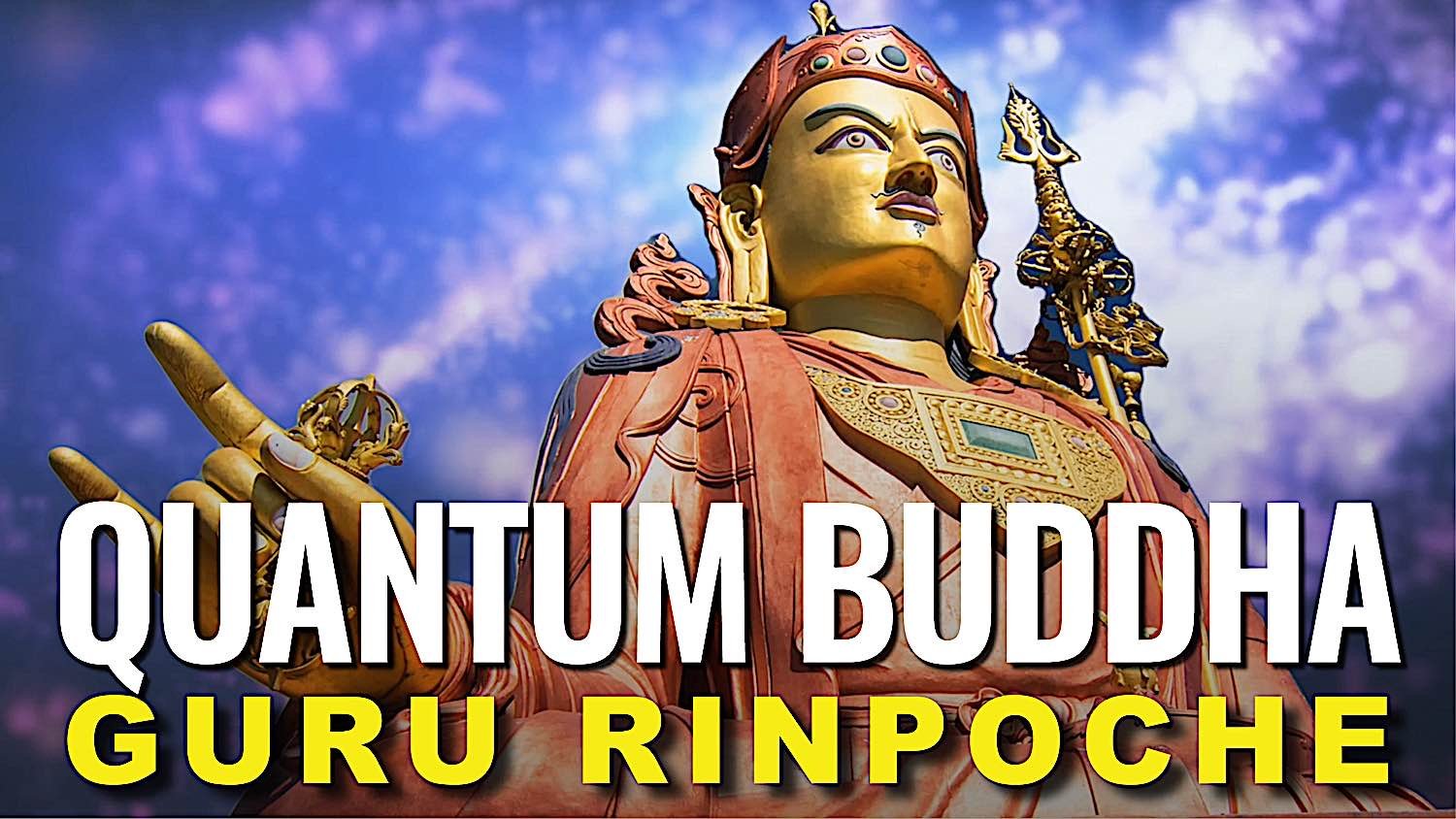 Is it confusing to label Padmasambhava as both the Quantum philosopher and the mystical, magical wizard of Enlightenment and simultaneously as a fully Enlightened Buddha?

Although on one hand he is lauded as the miraculous Lotus Born, he is also embraced by many scientists for his sound Quantum vision. Are they contradictory?

Padmasambhava’s life was a living embodiment of the miraculous. Nothing is impossible to the fully Enlightened and marvelous Guru Rinpoche — and everything about his amazing life is a wonder. Just as Shakyamuni Buddha, the first Buddha of our age, demonstrated extraordinary phenomena, Padmasambhava personified them. Why does an Enlightened Buddha display magical feats? As “Upaya” or skillful means, or upaya-kaushalya meaning “skill in means.” In simplest terms, upaya is any activity that helps others realize enlightenment.

At the same time as he demonstrated the miraculous, especially helpful in presenting the Dharma to Tibet, Padmasambhava taught the science of the mind.

Guru Rinpoche’s Science of the Mind

His miraculous birth, born in a Lotus, was prophesied in texts by the first Buddha, Shakyamuni, the original Quantum pioneer. Padmasambhava’s teachings remain vitally relevant today, especially as the world spins from one crisis to another.

In what way does an ancient living Buddha manifest quantum energy? Padmasambhava popularized meditation methods to help us understand the true nature of reality, and the ultimate nature underlying the illusory “physical world.” Shunyata — Emptiness or Oneness of all phenomenon — is very much a theme in Quantum Physics.

Guru Rinpoche, the Great Lotus Born, was none other than the original Quantum Physics explorer. He didn’t just theorize — he experienced. He also taught us how we could likewise peel away the trap of “ordinary appearances” and experience for ourselves.

One way he demonstrated the “layers” of reality often discussed in Quantum Physics is through his manifestations. In a wonderful documentary by Shambala Film Studios titled Guru Rinpoche — Searching for the Lotus-Born Master, the narrator suggests,

“Is it possible that behind each manifestation there may be a coded language revealing the laws of quantum physics?”

“Quantum physics is indeed very much in agreement with Budhistic Emptiness.”

Although these concepts are Mahayana, introduced by Shakyamuni Buddha, they were exemplified in the Vajrayana teachings of Padmasambhava. The Second Buddha of our times, Padmasambhava, was the “explorer” and revealer of Quantum mysteries. His methods remain relevant and powerful today.

Padmasambhava Buddha, iconic of Vajrayana Buddhism, challenges notions of reality with elaborately visualized mandalas and practices — which we build up mentally in our meditations, only later to dissolve to emptiness. The psychology of these visualizations is certainly sound. For example, visualizing the same Buddha in a wrathful form helps us focus our mind on powerful concepts of protection and power.

Padmasambhava taught many Yidams, chief among them Hayagriva, the wrathful form of Amitabha Buddha.  It would be a mistake to think of these multiple emanations and appearances of Enlightened Deities as separate. All are ultimately aspects of Oneness.

The Buddha for modern, dangerous times

Padmasambhava remains very “relatable” in our century. He remains a living Buddha to Tibetan Buddhists. Even amongst non-Buddhists, his reputation is well known.

His piercing, magnetic and “magical appearance” in his main form reinforces this persona. As described in the amazing Himalayan Art dot org resource:

“With a steady gaze looking on all beings, one face adorned with a moustache and small goatee, the right hand holds to the heart an upright gold vajra. The left hand placed in the lap holds a white skullcup filled with nectar. The ornate katvanga staff of a Vajrayana mendicant rests against the left shoulder. Adorned with gold earrings and various ornaments, the head is covered with a lotus hat, a gift of the King of Zahor, with silk brocade topped with a half-vajra and vulture feather. Attired in various robes of different colours reflecting the disciplines of the Vinaya, Bodhisattva and Mantra Vehicles, in a relaxed posture with the right foot extended resting on a lotus cushion, he is seated on a sun and moon disc above a pink lotus.”

The easiest way to connect with his practice and his energy is to chant his mantra each day, while visualizing his powerful face and piercing, energetic eyes. At the end of this video we present this amazingly empowered mantra, chanted beautifully 108 times with visualized images. Chant along with us now.