Wrathful Buddhas video: the first responders in meditation; how to relate to the fearsome Enlightened deities 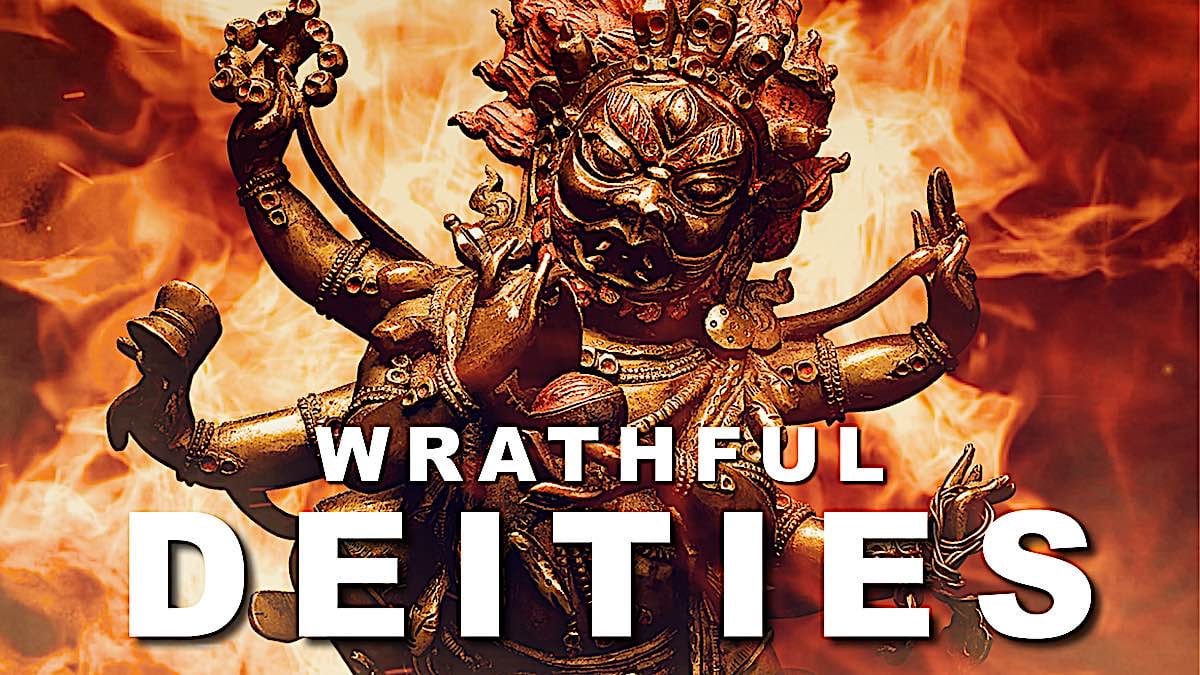 If you were facing a life-threatening scenario, would you call emergency services on your phone, calling for help from well-trained first responders — or call your kindly relative. If disaster strikes, we inevitably first think of our wonderful first-responders. In almost any scenario, we are conditioned to look for help from those who are best trained and equipped to help us. Although advice of a loved one can be helpful, you need action and activity when you are in trouble.

In Mahayana Buddhism, the first responders, the ones who save us from obstacles and demons, are embodied in Karma Activity Buddhas and Bodhisattvas, such as Tara or Guanyin.

Or, when we declare a state of emergency, in the form of Wrathful Aspects of the Buddhas.

The First Responders in Vajrayana Buddhism

In our meditational practices, the first responders – at least in some forms of Mahayana Buddhism — are the wrathful deities. Since Buddhas have transcended our mental limitations, they can appear in any form whatsoever.

The wrathful forms are our first responder team. Instead of uniforms, guns and rescue equipment, our Buddhist first responders are burly, ferocious, powerful, towering presences that intimidate our psychological and external demons.

Whether you view “demons” and obstacles as psychological, or as supernatural beings, it is helpful to visualize the Enlightened and helping forces as “wrathful, monstrous, gigantic.” The psychology is obvious. If you are facing an emotional “vampire” you want a more wrathful “force” to burn away the negative force — something much stronger than the attacking monster.

For example, if you were working on a charitable project, and finding it daunting, you might draw strength from the great Bodhisattva of Compassion Chenrezig or Avalokiteshvara.  The tasks are daunting. Those who are suffering are endless. You feel helpless. In this case, perhaps, if you had the practice from your teaching, you might turn to Chenrezig’s more wrathful form.

Psychologically, this gives you meditation a boost of compassionate but fierce energy.

You are meditating on the compassionate one, the Buddha of active compassion Avalokiteshvara, or Chenrezig. Although is thousand arms of compassion are reaching out to all beings with their love and compassion, it is not enough. In his wonderful book A Guide to the Deities of Tantra, teacher Vessantara, describes the transformation:

Avalokiteśvara, the Lord of Compassion, gazes out across the world, his white radiance soothing the sufferings of living beings. With one pair of hands he clasps to his heart the wish-fulfilling gem of his vow to eradicate the world’s pain. In his upper left hand he holds the lotus of spiritual receptivity, the desire to leave the mud of saṃsāra and reach up towards the sun of true happiness.

Above his head we sense the oceanic love of Amitābha, his spiritual father. In Avalokiteśvara’s heart the mantra oṃ maṇi padme hūṃ rotates ceaselessly, pouring its light into the six realms of suffering. In his upper right hand we see his crystal mālā turning. With each bead another being’s sufferings are extinguished. We watch the dancing reflections in the crystal beads, follow their steady rhythm as aeons pass.

Still the beads flow through the milk-white fingers. The pace is steady, smooth, ceaseless. And yet … there is still so much agony, pain, and frustration mirrored in those patient eyes. Hearts which hear the call of the mantra and long to respond are chained by dark forces, restrained by fear, bewildered by confusion, so that they do not know whence the sound comes or how to follow it.

The sapphire eyes cloud with a gathering storm of spiritual impatience. They steal a glance at the steady, but too slow, circling of the crystal beads to their right. They look once more, hard, at the plague forces of ignorance, the jailers of hatred, the ransomers of craving who hold so many beings in their clutches.

The crystal beads begin to change shape. They lose their sparkling reflections for a sun-bleached white. They become a death’s head garland, a rosary of skulls. The delicate white hand grows darker, its light changing from white to deep blue, like an eclipse of the sun.

The powerful hand’s first and last fingers stab the air in a menacing gesture. Around it roars a corona of flames. With a world-shaking cry the figure, now blue-black, starts to its feet. The wish-fulfilling jewel transforms into a vajra-chopper and a skull cup dripping with red nectar. The soft lotus transforms into a trident with a death’s head.

Now, in this form, Chenrezig has become the great Protector Black Mahakala. Against Mahakala, no evil or obstacle can prevail.

It can be helpful to think of the wrathful deities as “monstrous” and “more powerful” aspects of the peaceful Buddhas and Bodhisattvas. In modern, comic-book terms, we might think of superheroes such as the Incredible Hulk.  Just as Doctor  Bruce Banner in this comic book is the peaceful scientist, he can become the Hulk in times of emotional stress. In the stories, they are both a force for good, but the Hulk is much more pumped up.   In a similar way, when we meditate, compassionate Amitabha can transform into ferociously compssionate Hayagriva, or wise Manjushri into fearsome Yamantaka, or Chenrezig into Mahakala.. These are the more “super charged” wrathful forms of each of these glorious ones.

Wrathful deities in Buddhism can be terrifying, monstrous, and demonic in appearance—but they are actually the “good guys.” They are deliberately more ferocious than the “demons” they are subduing. People who might be casually interested in Buddhism are often puzzled, even horrified, by Tantric Buddhist Deities depicted as ferocious personas. At first exposure, they might seem almost demonic, sporting garlands of human heads, multiple terrifying faces, often stepping on human forms.

There is no denying the “extraordinary power of tantric deity images. These forms are deliberately more terrible than demons; they represent forces that help us transform these very demons—whether you see them as psychological shadows of the mind or tangible entities. From a Buddhist point-of-view, they help us remove the obstacles to Enlightenment.

How does it Work?

Psychologist Preece, in his book The Psychology of Buddhist Tantra, clarifies wrathful practice with an amusing biker gang example:

“If we think of a gang of bikers that has become totally wild and anarchic, how might their energy be brought under control?  If a man dressed in a pinstriped suit with good intentions said to them, ‘Now look, you fellows, this just won’t do,’ we can imagine how predictably derisory their response would be. On the other hand, if they were addressed as a Schwarzenegger-like figure, who looked powerful and tough, dressed like a wild man, disheveled and scarred, carrying chains, knives and other weapons, the response would be different. They might develop respect or interest and be drawn into some kind of relationship, even to the point where becoming their leader, he could change the direction of their behaviour… and their aggression would be gradually channeled.”

Wrathful deities embody wrathful characteristics. They can appear in apparently demonic aspects, bristling with weapons, fanged, dripping blood, and surrounded by explosive fire. When a serious practitioner evokes them, their power to transform is forceful and certainly very tangible. Just as a Schwarzenegger-like character puts on a show of force and ferocity, to accomplish his ‘tough love’ agenda, the Wrathful Deities of Tantra are motivated by compassion. Their cause is bodhichitta. The wrathful appearance is an expression of skilful means.

Imagine now, you are meditating on the Peaceful Manjushri, the Buddha of Wisdom with his great sword of wisdom. You find yourself opposed, by your own doubts or external forces, obscuring your understanding of ultimate wisdom. If you have the training and a teacher, you can transform peaceful Manjushri into the penultimate wrathful Buddha Yamantaka. The great Yamantaka is the “slayer of death”, arguably the most ferocious of the wrathful deities and is considered a helpful practice for people with anger or hatred issues. At a higher level, Yamantaka—which means literally “slayer of death”—is a form more terrifying than death itself, and by virtue of this, he represents the very power of Enlightenment to defeat death.

Or, you are meditating on the great compassion of the Great Buddha of the West, the Buddha of Infinite Light Amitabha, adored by many millions of Buddhists. His shining light illuminates and comforts you. Yet, you face obstacles, stresses. You worry that your compassion is not enough to save all beings. With an empowered meditative mind, you can transform Amitabha into the incomparable Hayagriva. No foe, demon or internal obstacle, can face down the wrath of the horse-headed wrathful one, Hayagriva. His compassion is so ferocious, every being is subdued by his angry loving wrath.

Many people turn to Tara meditation for active compassion and helping energy in their lives. Tara is famous for rescues and interventions that help sentient beings. When Tara’s active saving energy is not enough, she can take many wrathful forms. In her ultimate wrathful emanation, White Tara, or White Sarasvati, who is an emanation of White Tara, can tranform into the ultimate expression of wrathful, protective energy, possibly the greatest of all the protectors, Palden Lhamo.

The Embodiment of the Shadow

Why would anyone wish to conjure up such apparently horrible images of Enlightenment? Vessantara explains:

“On a deeper level, dharmapalas throw back into the shadows the forces of nightmare and madness which always threaten to tear loose and subjugate the human psyche.”

Interestingly, many psychologists, Preece among them, have analyzed wrathful practice and found it psychologically sound. In the same way, a psychiatrist might ask a patient to face his past traumas—often deeply buried in the subconscious—the Tantra practitioner faces the obstacles to Enlightenment.

The highly advanced practices of Tantra actually “transform” the negatives, instead of suppressing them.

“We have lost the symbols and rites of transformation that elevate the dark angel from an unconscious, potentially demonic state into a healthy conscious relationship,” writes Preece. “Despite our best efforts at curbing and containing aberrant human nature, the daily news is filled with its shadowy effects. The question still stands as to how we transform rather than suppress its forces.”

Meditating on the ferocious embodiments of Enlightenment, for some people, can feel more vivid, in some ways more engaging and compelling than calming, peaceful deity meditations. There is no question you are working with the mind. The images jump vividly, snap to clarity. Perhaps it’s the massive scale of the imagery, so intense and fierce that makes it easier to visualize for some people.

Because we are working with the obstacles and negative aspects of the mind, wrathful deities are usually restricted practices. Because we work with the darkest internal and external forces, unguided practice — other than simple offerings and prostrations — could be considered dangerous and is actively discouraged.

A qualified teacher with lineage is always required.

For those karmically blessed enough to find their perfect teacher, and willing to make an unbreakable commitment, the lightning path of wrathful deity practice is an extraordinarily rewarding and enlightening experience.

For those of us without these empowerments, we can certainly bring this good karma into our lives with images and offerings and prostrations to the wrathful forms of the great Buddhas.

Meanwhile, we can rely on the one first responder who appears less wrathful but is no less powerful. Tara, the Saviour Buddha is a karma activity Buddha — active in our world, helping us. In our modern comic book metaphor, she would be Wonder Woman — powerful, yes, but kind and caring. Her practice requires no special empowerment, and she is famous for her rescues.

Whether Tara as Wonder-Woman, or our Wrathful protectors, when face with fearsome obstacles — internal or external demonic forces — it can be helpful to turn to the first responders of meditators — the Wrathful Enlightened Deities of Buddhism.